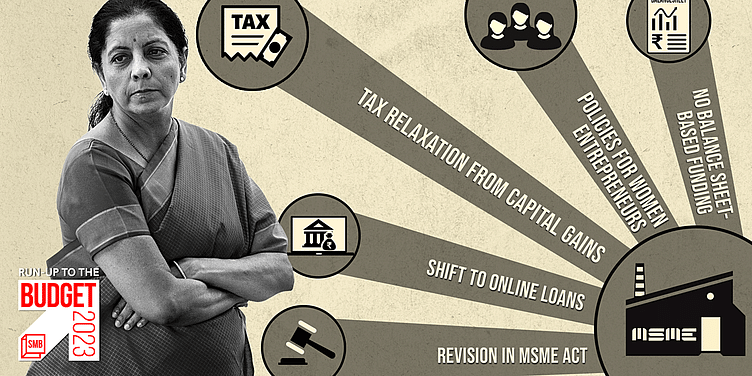 Ahead of Budget 2023, SMBStory spoke to association bodies to understand the problems that MSMEs face and the recommendations they have made to resolve them.

DP Goel, Co-Chair, MSME Committee, PHD Chamber of Commerce and Industry, believes that MSMEs are “very close to the heart of the Prime Minister”.

But the sector – despite being in the limelight and grabbing the government’s attention—faces a multitude of problems. From tech adoption and digital advancements to working capital requirements, MSMEs across India are unanimous on one thing: the need for corrections to help their cause.

Now, ahead of the Union Budget 2023, which will put the spotlight on Finance Minister Nirmala Sitharaman and her announcements, MSMEs - pivotal for the development of the nation and to achieving the dream of a $10 trillion economy—have great expectations.

SMBStory spoke to different associations to understand the recommendations they have drafted for the ministry and what can be expected of the Union Budget 2023 for MSMEs. Here are five suggestions that will benefit the MSME sector – and consequently the Indian economy.

One of the biggest hurdles MSMEs face as they chase growth is delayed payments. According to a Dun & Bradstreet report, an estimated Rs 10.7 lakh crore, 5.9% of the gross value added (GVA) of Indian businesses, is locked up annually as delayed payments from buyers to MSME suppliers. GVA is a measure of the value of goods and services produced by a particular part of the economy, minus the cost of raw materials or other inputs.

DP Goel, Co-chair, MSME Committee, PHD Chamber of Commerce, says a solution to the delayed payment issue is mentioned in the MSME Act 2006. The Act states that purchasers have to clear MSME payments within 45 days, and that interest and penalties will be levied if the timeline is crossed. But despite the stringent measure, purchaser buyers often delay payments endlessly as the  “unended Act” cannot give any conclusion.

“Our recommendation to the government is that the MSME Facilitation Council should have the power to block the bank account or GST of the purchaser unless a decision on delayed payment is taken. This will reduce the court proceedings in case an MSME has put the case in civil court,” he says.

Goel highlights another flaw: if any MSME has not filed a case against the purchaser for delayed payment or has not transacted with the purchaser guilty of delayed payments, the enterprise cannot recover the money after three years by law. “This law is not required and amendments should be made,” Goel says.

Union Budget this year to follow spirit of earlier ones: FM Nirmala Sitharaman

Goel questions how MSMEs, which power the nation’s growth, can grow if they are struggling under the burden of taxes.

“Section 54 of the Income Tax Act says that deploying money in the housing sector after making capital gains by selling any property will be free of capital gain tax. However, if a person sells their property and invests the money into starting or growing a business, they need to pay capital gain tax,” he says.

He states that a business helps generate income and employment, and the tax is a burden on MSMEs.

The PHD Chamber of Commerce and Industry (PHDCCI) has recommended that the government slightly amend this Act and offer tax benefits for the industrial sector like it does the housing sector.

The basic pain points of MSMEs are related to financial needs as they have only one source of capital: bank finance.

Mukesh Mohan Gupta, President of the Chamber of Indian Micro Small and Medium Enterprises, says the organisation has submitted 75 suggestions to the Prime Minister and Finance Minister, of which one is “bank finance that is of the utmost importance”.

He adds that an online loan application process will help keep track of the number of applications received, which doesn’t happen in the offline mode. Checking the status of the application will be easier and, if the loan is rejected, MSMEs would be able to understand the reason.

Banks have a practice of considering credit applications based on balance sheets.

Mukesh says their suggestions include that cash flow-based funding be allowed instead of balance sheet-based funding.

“Today, all business information is available through the GST portal. Lenders can easily find out business finances, growth, turnover, customer details etc., which will enable decision-makers to either give credit to MSMEs or not. Hence, the role of balance sheet-based funding should be cut,” he says.

Many major policies in the previous budgets focused on extending credit to MSMEs, but there has been no significant impact on women's entrepreneurship.

“Women are only 20.4% in Indian MSMEs. So, I have suggested that if they can expand the Mudra Scheme, Stand Up India and other credit guarantee schemes to target women entrepreneurs that will be a great leap for us,” says Harjinder Kaur Talwar, Vice President, FICCI-CMSME and Member of MSME National Board.

A scheme on women's enhancement is also what Harjinder says they have recommended.

“Stand Up India is catering to this need but it is for women starting out. We need something for women who are established and are doing well,” she says.

It’s clear that the vision of Atmanirbhar Bharat is only possible when MSMEs are given a big push, t tap the true potential of the sector. Policies and structures need to be framed in a way that enables ease of doing business.

All eyes are now on Nirmala Sitharaman and Union Budget 2023 as MSMEs wait with bated breath for anticipated announcements and policies.