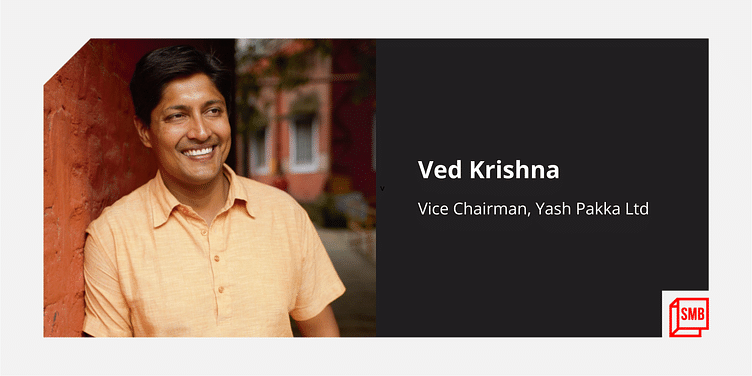 Yash Pakka Ltd was started in 1981 in Ayodhya. Passing the test of times and emerging only stronger, the company now makes Rs 300 crore turnover by making sustainable paper and tableware out of sugarcane waste, and aims to touch Rs 1,400 crore by 2025.

The story of Ved Krishna’s roller-coaster life is the perfect example of the saying: ‘when one door closes, another one opens’. Ved had always dreamt of becoming an Air Force pilot. However, destiny had other plans for him.

Ved is no stranger to business. From early on, he saw his father, KK Jhunjhunwala, build a paper mill from scratch in Ayodhya, Uttar Pradesh. Established in 1981, ﻿Yash Pakka﻿ started by making wrapping papers out of sugarcane waste.

KK saw many ups and downs in his life, especially after separating from his joint family. His wife even had to sell her jewellery for KK to start the business.

“I have seen my parents working as a team. My father is my role model and he always considered my mother as a trustee in his business,” says Ved.

At one point, Ved’s father was even considering selling off the business. But now more than 40 years later, Yash Pakka Ltd is a Rs 300 crore turnover company.

In an in-depth interview with SMBStory, Ved, Founder and Vice-Chairman of Yash Pakka Ltd (a BSE listed entity), talks about how his father established the business and how Ved became a part of the company, which is now one of India’s largest enterprises making packaging paper, moulded foodservice products, and value-added products made out of sugarcane waste.

In the early 1980s, with plastic becoming the preferred choice for packaging, sustainability was losing its grip. However, KK believed in the concept of bringing sugarcane waste into use for making paper. However, the journey wasn’t that easy.

While he had just Rs 2 lakh in his pocket, the machinery he wanted to deploy cost around Rs 40 lakh.

“My father didn’t lose hope and offered the manufacturer that he would arrange the money soon and that the work should be started. The manufacturer (maybe) had seen the spark my father carried, and accepted the offer,” Ved narrates.

For a short stint, KK recycled waste lottery tickets to make packaging paper. The business was profitable from day one, Ved says. Gradually, one thing led to the other and KK was successful in setting up a manufacturing plant to make wrapping papers out of sugarcane waste in around 1985.

“He never brought the money home and kept reinvesting to scale the business. The times were tough but his efforts kept us going through thick and thin.” Ved says.

KK travelled the world to see and understand technologies developed in other countries, and implemented them in his factory.

Recalling an episode, Ved says that in the early 1990s, Uttar Pradesh was undergoing an extreme power crisis. Due to an irregular power supply, productivity was getting hampered. Rather than complaining to the government or feeling worried, KK improvised and developed a cogeneration boiler in-house.

“Everyone had thought that my father had gone crazy but he was a visionary. It was due to his effort that today, we are not dependent on Uttar Pradesh Power Corporation for electricity,” Ved adds.

After successfully running the business for some years, KK asked both his sons (Ved and his younger brother Yash Krishna) in the mid-1990s if they wished to join the business. Though Ved had dreamt of becoming an Air Force pilot, he ended up pursuing a degree in sports management from London and wanted to do something in sports. His brother also had different plans.

“We both denied joining the business and our father was very casual about it. He also had a dream to travel the world on his bike. He said to us, “Ab maine bhi bahot kaam kar liya, phir business bech dete hain (Now I have also done a lot of work, let’s sell off the business),” Ved recalls. “He wanted to spend the rest of his life roaming the world.”

But it was easier said than done.

KK tried selling off the business but something or the other came in the way. The love and respect he earned in his life didn’t give him any takers but rather supporters to carry forward the business. Seeing his father struggling to sell off the company made Ved rethink and take a chance to understand the business. This was his entry into entrepreneurship and since then, there has been no looking back.

By betting on garments made from recycled PET bottles, UNIREC finds opportunity in sustainable clothing

Contributing towards a cleaner planet

Ved stepped into the business in 1999 when he was in his 20s. “At that time, the turnover of the company was around Rs 25-30 crore,” he recalls. His father decided to only oversee the business, giving Ved the responsibility to handle everyday operations.

“For three to four years, I completely juggled. Hamesha lagta tha company aj band hogi ya kal (there was always a fear of the company shutting down). It must some angels that held everything together because the turnover was continuously going down,” he says.

That’s when he met his mentor who helped him find his purpose.

“I understood that there is a reason for me being here. My purpose is to contribute to the world,” Ved adds. Thus, he started on the journey towards contributing to a cleaner planet.

By 2012, Yash Pakka’s operations became smooth when they started working on their tableware range. This is when they launched CHUK – a 100 percent compostable and biodegradable tableware brand that helps businesses enable their customers to 'eat safe.'

CHUK’s products are made from sugarcane residue that is completely compostable and serves as a replacement for styrofoam tableware and single-use plastic, Ved says. At present, brands including ﻿Rebel Foods﻿, ﻿Haldiram's﻿, Cafe Coffee Day, and ﻿Chai Point﻿, use CHUK’s products.

Yash Pakka Ltd is present in more than 30 countries, including local grocery markets in Iran and the UAE. Ved says that the sustainable packaging market is vast and has a presence of many players. Andhra Paper Ltd, Agip Paper and Industries Ltd, Astron Paper and Board Mill to name a few.

A research study by TerraChoice, a global marketing company, revealed a 73 percent growth in the eco-friendly product market over the last five to seven years with new companies and products making their entry.

“The growth of the market is also high. You see, people eat three meals a day – counting to 90 in a month and more than 1,000 a year. If we penetrate in the daily lives of users, giving them sustainable products, the growth of the industry can only be imagined,” Ved states.

Innovations and the way ahead

Talking about the future plans, Ved says that they are in talks with ﻿Zomato﻿ to facilitate a big change when it comes to packaging in the food delivery industry.

“I have reached where I belong and now the aim is to grow in the food carry segment, whether with paper or compostables, and become the biggest player by 2025.”

Ved aims to upgrade to the largest machine in the paper unit for capacity expansion and modification to manufacture release-base and glassine paper. The company is also working on making paper-based flexible packaging and mineral-based carry bags. The brand is pitted towards the global food packaging industry and aims to emerge as a global leader by 2025, with a target to achieve an annual turnover of Rs 1,400 crore.