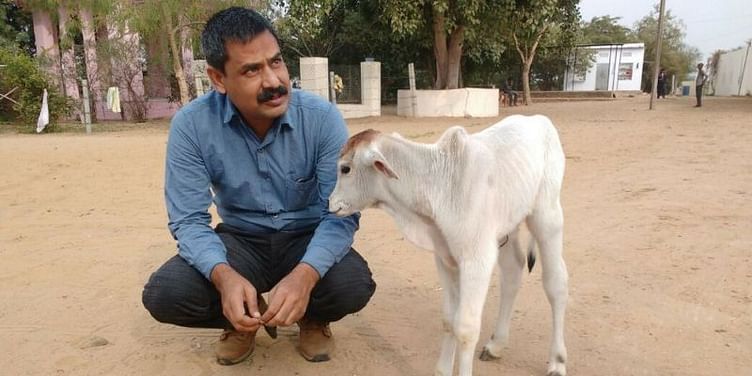 Over the last four years, Dr Tapesh Mathur has designed prosthetic limbs for over 90 animals. He provides the artificial limbs – which cost Rs 3,000 to Rs 4,000 - for free.

If a human can get a prosthetic limb, why not an animal? Easier said than done however, as while there is a tremendous amount of ongoing research for human prosthetics, there is hardly any for animals.

But this Jaipur-based veterinary surgeon did not want to wait around anymore. Dr Tapesh Mathur is credited with making the ‘Krishna Limb’, India’s first prosthetic limb for animals. Tapesh has been designing prosthetic limbs for animals since 2015 and to date, has helped 90 animals from various States adapt to using a prosthetic.

This wildlife conservationist from Assam has rescued over 2,500 animals till date

From design to production, Tapesh does all the work by himself at his home-workshop in Mansarovar, Jaipur. Each limb costs up to Rs 3,000-Rs 4,000, but Tapesh does not charge for them.

The cost is taken care of by Pen Media Foundation, co-founded and funded by Tapesh and his wife, Shipra Mathur. The foundation accepts financial contributions from people for animal welfare.

Speaking to The Quint, Tapesh said,

“I could not bear to see their (the cattle’s) pain in gaushalas. These animals could not voice their angst as humans can, but they feel the pain all the same. They waited helplessly for food or for someone to clean them. And I kept thinking if Jaipur Foot can help humans walk again, why can’t something similar be done for these animals? Thus I began my research.”

Tapesh designed his first prosthetic limb for a two-year-old calf named Krishna, who learnt to walk using the limb.

Producing these prosthetic limbs wasn’t an easy task initially, and Tapesh required raw material, which was expensive. Polypropylene, which is used for manufacturing prosthetic limbs, is only supplied in bulk by suppliers, and Tapesh had to source it from Mumbai using his own savings.

He told Efforts For Good,

“We generally work with cows, horses, and dogs, but have started receiving applications for other animals as well. Recently, we got a request for a limb for a pet parrot. We are still working on the design.”

There are certain steps involved in designing. First, Tapesh takes the necessary measurements, based on which the artificial limb is moulded. The real challenge comes when Tapesh has to visit animals living in remote areas as his patients often cannot be brought to him.

Once the prosthetic limb is ready, Tapesh visits the animal and attaches it for free.

The procedure doesn’t end there, for the animals need up to 15 days of physiotherapy training to teach them to use the artificial limb.

Meet the 31-year-old animal activist who tags stray dogs with reflective collars to save them f...