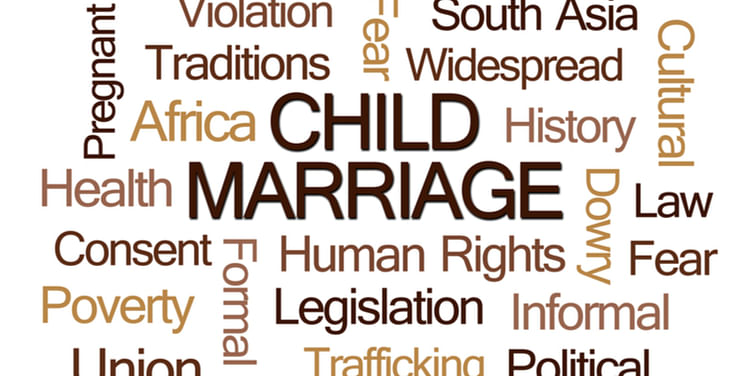 While statistics show a decrease in early marriages, the practice is still predominant across India. Here’s how the government can address this problem at the grassroot level.

Child marriage is a curse that India has been battling since time immemorial. Today, things have slowly changed, and there is hope yet with a latest survey that reveals that there has been a decline in child marriages in India, though the country is still home to one of the largest number of underage brides. Marrying so young directly impacts the health of the girl, as child marriages are often accompanied by early and frequent pregnancies and childbirth, resulting in higher than average maternal morbidity and mortality rates.

Child marriage or early marriage is a human rights violation. With at least one of the parties under 18 years of age, and not personally expressing their full and free consent to the union. Technically, for the past 90 years, child marriage has been outlawed in India. The Child Marriage Restraint Act in 1929 set the legal minimum age of marriage at 14 for girls and 18 for boys. This was also the first time, after the discontent shown by the Muslim community, child marriage was brought under the Muslim Personal Law, implying that no minimum limit and allowed parental or guardian consent is required in the case of Muslim marriages.

Gradually, the introduction of the Child Marriage Act 2006 gave the issue its due status of harmful practice which should be eliminated, and therefore moved the legal mechanism from restraint to prohibition mode. The subsequent rulings included one by the Gujarat High Court in 2015 that held that the Child Marriage Act is a Special Act and it will override the provisions of the Muslim Personal Law, Hindu Marriage Act or any personal law. The ruling by the Supreme Court of India that criminalises sex with a child bride further strengthened the implications of the act.

India is party to several international and regional mandates, and commitments that have a bearing on children’s rights and entitlements with respect to survival, development, protection, equity of gender and identity, notably the international covenants and conventions and other commitments promoting equal rights of all boys and girls, particularly the Universal Declaration of Human Rights, the UN Convention on the Rights of the Child, CEDAW, the Beijing Platform for Action, the 2002 ‘World fit for Children’ UN commitments, SENDAI Framework of Disaster Risk Reduction, and to the SAIEVAC–Kathmandu Call to Action and other regional agreements and plans, all of which are relevant for the overall development and protection of the children of India.

The World Population Data (2017) shows that India’s adolescent birth rate per 1,000 women aged 15 to 19, is around 28 which is lesser than the South Asian average of 35 percent. The sharp decline in the adolescent fertility rate from 66 in 2000 to the current rate can also be contributed to the sharp decline in child marriages that could eventually be contributed to the increasing rate in girls’ education, proactive government investments in adolescent girls, and strong public messaging around the illegality of child marriage and the harm it causes. All this has contributed to the shift in numbers. The decline in the overall child marriage rate in India has also resulted in the overall decline of the Child Marriage rate in South Asia from almost 50 to 30 percent.

The data reveals that 27 percent girls, or nearly 1.5 million girls get married before they turn 18 in India, and around seven percent even before attaining the age of 15. Despite the sharp decline, India is still home to one of the largest numbers of underage brides. After the successful initiatives by GoI, now there is a need to reach the last mile and often the most difficult set-ups with tailormade initiatives to address the notable differences in the rate of child marriage in different parts of India. The efforts including special focus on high prevalence district such as Rajasthan, Bihar, West Bengal and promotion of state specific efforts such as the Strategy and Action Plan for the Prevention of Child Marriage by Government of Rajasthan (2017). There is also a need for effective means of monitoring of schemes that address inter-related issues such as the Dhan Laxmi scheme and the Apni beti apna dhan programme, Kishori Shakti Yojana adolescents’ empowerment programmes.

Overall, to ensure the prohibition of child and early marriages, it is essential to address the anomalies between the existing scheme, make the systems more child-friendly, better defined with clauses towards annulment, and provisions to also focus on the needs of child brides or those who moved out of the system through annulment. To facilitate these changes the following areas of action are recommended:

Meet Anusha, the girl who escaped child marriage to play rugby for India's U-19 team