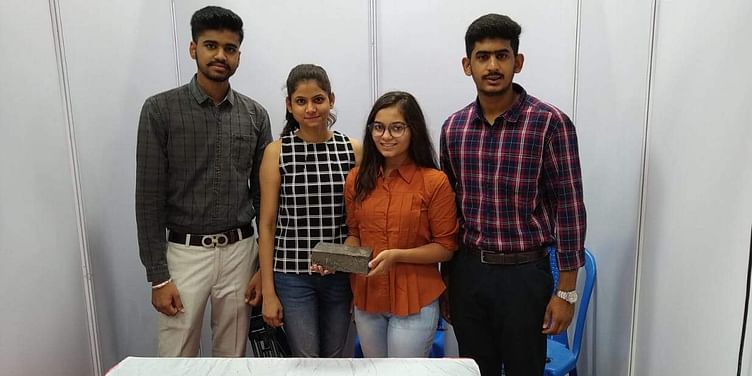 Civil engineering students from Techno India NJR Institute of Technology in Udaipur have invented a new technology for producing bricks from industrial and domestic waste. Each brick costs only Rs 3.

India is ranked as the second-largest producer of bricks in the world and produces an estimated 200 billion bricks a year. It keeps mammoth government and private infrastructure projects under development. Having said that, the production of bricks consumes a great amount of high-quality soil and emits pollutants in the air, which is an environmental hazard.

An alternative and green way to produce these bricks is the solution.

Leading the way is a group of students from Udaipur, Rajasthan who are producing bricks from domestic and industrial waste.

The idea came up when the group looked at their college ground, which was covered with plastic bottles.

“Being civil engineering students, we thought of using it for something useful.”

It took almost a year to carry out their research with the guidance of their professors. The team then came up with a prototype, which consisted of 30-40 percent of plastic waste, 40-50 percent of demolition waste, and 20 percent of marble and thermal waste.

Witnessing how the city municipality was finding it hard to dispose of marble slurry waste, the team decided to consider slurry as one of the ingredients in the brick’s composition.

“We have come up with an environment-friendly technology that will significantly reduce air pollution and manage waste effectively. There are no residues left, no carbon emission and no by-products formed.”

The group has named their innovation, Wricks. To give some technical insight, these bricks when compared to conventional bricks have good compression strength and are non-porous. A brick absorbs only one-two percent of water whereas a conventional brick will absorb 20 percent.

For high-rise buildings, Wricks would be the best option for engineers instead of conventional bricks.

Talking about how the invention of Wricks is aimed towards social welfare, Kunjpreet said,

“As you can observe, our day-to-day activities produce a huge amount of waste and no one knows how to reduce and reuse it properly. We also rely on red clay bricks that cause air pollution and soil erosion. If we sell 10 lakh 'Wricks', it will recycle 2,50,000 kg of waste material in all categories.”