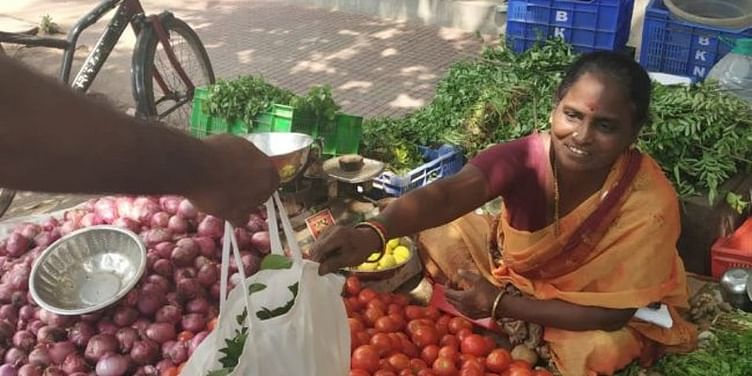 The corporation, with its 'Say No To Plastic' campaign, is carrying out anti-plastic inspections to crack down on plastic consumption, and levying a penalty of Rs 5,000 for using a plastic carry bag.

We all know that using plastic is causing a lot of harm to our environment. Without being recycled, most single-use plastic bags enter our landfills, taking hundreds of years to decompose. They also enter our water bodies, and animals eat them and often choke and die.

While many State governments have banned single-use plastic across the country, not many have succeeded in implementing the ban.

To cut down on the city’s plastic consumption, Noida Authority has decided to encourage the use of cotton bags among its citizens.

For this, the corporation kickstarted a campaign on July 4, and has been constantly promoting the use of cloth bags against that of plastic bags, which adds up to the existing pile of waste generated by the city. Speaking to NDTV on the same, Alok Tandon, CEO, Noida Authority, said,

“The drive initially saw the distribution of more than 500 cloth bags in Harola market in Sector 4, and within a few days, the entire stretch of Noida will be covered. With this, we want to enforce the plastic ban that came in the State in the year 2018, effectively. We will be educating people on why they need to give up their toxic relationship with plastic bags and adopt the greener alternatives.”

The Authority is also carrying out anti-plastic inspections to crack down on plastic consumption, and is also distributing cotton bags to all citizens, including local fruit and vegetable vendors, for free.

According to The New Indian Express, plastic constitutes up to 10 percent of the entire waste the city generates, which adds up to around 40-50 tonnes of plastic per day.

To make 'Say No To Plastic' campaign a success, the city authority has roped in a few NGOs as well. With their help, the authority aims to create awareness about the negative impact of single-use plastic on the environment, and how beneficial it is to switch to sustainable alternatives.

Despite the plastic ban that came into effect in the city a year ago, people have still been using plastic bags. Hence, to further strengthen the campaign, the authority is planning to levy a penalty of Rs 5,000 for using plastic carry bags below 40 micron thickness.

While a few citizens resisted the action, there were many who hailed the initiative.

“If something like this is happening, it is no doubt a good move. But we must understand that it is easier for shopkeepers and well-off customers to use paper or cloth bags for shopping. Street-side vendors use plastic because it is cheaper and easily available. Authorities should come up with solutions where greener alternatives are as cheaper as a plastic bag,” reports NDTV.

At this Goa’s all-purpose zero-waste store, one can buy anything but plastic and non-organic pr...