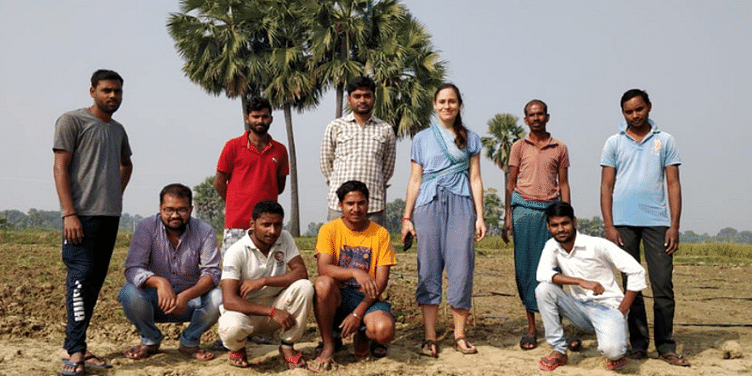 Bihar-based NGO Khetee has reached out to over 2,000 farmers through its workshops on agroforestry and helped them improve crop yield and productivity.

A staggering 44 percent of the Indian workforce is engaged in agriculture and allied activities. Despite the heavy dependence on this sector, many farmers in the country are trapped in a cycle of debt and are struggling to earn their livelihood.

According to a report published by policy think tank Niti Aayog in 2011-12, more than one-fifth of rural households with farming as their primary occupation were living below the poverty line. Some of the root causes for this are excessive stress on soil and water, limited exposure to modern practices, and low crop yield driven by climate change.

Realising that a collective effort is required to resolve the issues faced by the farming sector, Kumar Neeraj and Dharamjeet Kumar founded Khetee in 2017. The Bihar-based non-governmental organisation (NGO) focuses on helping farmers adopt agroforestry models to improve their output.

Agroforestry, a form of multi-cropping where trees, shrubs are grown among crops, is not only known to enhance soil quality and conserve energy, but also boosts agricultural productivity. Though the concept was formally outlined back in the early 20th century by economist and geographer J Russell Smith, not many farmers are acquainted with it.

To raise more awareness on agro-forestry, Khetee organises free workshops and training sessions for farmers on various techniques like permaculture, alley cropping (arrangement of a row of trees with crops in between), wind breaks (plantation of linear shrubs to enhance crop production), and upland buffers (placement of trees adjacent to a water for conservation purposes). It does not stop here. The NGO also works with farmers to implement agroforestry models according to their need.

“In the last two years, Khetee has reached out to over 2,000 farmers in and around the Durdih village, in Lakhisarai, Bihar. The agricultural set up in India is deteriorating due to lack of earnings, erratic rains, small and fragmented land holdings and over-dependency on chemicals. Our goal is to turn this around by spreading the word about sustainable and modern farming practices like agroforestry,” Kumar Neeraj, Co-founder, Khetee tells YourStory.

When 26-year-old Kumar Neeraj was studying for his degree in law at the Karnataka State Law University, Dharwad, he often visited his hometown, Durdih. He noticed that many of the farmers in the area were struggling with volatile agricultural output, poor irrigation systems, and weakened soil.

“Several farmers in and around my village were not able to earn well and their productivity was mainly dependent on the monsoons. I really wanted to do something to fix this. The thought kept lingering in my mind. Meanwhile, I got into Kanthari Institute of Social Entrepreneurship in Thiruvananthapuram for a one-year leadership course in social change. I took up the opportunity to do a lot of field work, volunteer at farms, and learn about different agricultural practices. It was during this time that I got acquainted with agroforestry and its advantages,” recollects Kumar.

With the help of his mentors Sabriye Tenberken and Roland Frutig at Kanthari, Kumar began delving deep into agroforestry techniques like natural farming, parmaculture and organic manure application. Once he was convinced about its feasibility and functionality, he established Khetee as an NGO in 2017 with an aim to make agriculture sustainable and profitable in Bihar.

Initially bootstrapped, today, the organisation has a small team of four employees and a regular volunteer base of seven individuals working towards empowering farmers through agroforestry.

Building the path towards sustainable farming

As soon as Khetee was established, the co-founders focused all their energy on developing a successful agroforestry working model. With the help of financial assistance from Srishti Foundation, they got together six farmers from Durdih village in Bihar and set up a model on a piece of land in Puducherry.

“Since all the six farmers were only comfortable with monoculture (cultivation of a single crop), they refused to implement the agroforestry model on their plots of land. After much effort, one of the farmers, Raju Mandal, was ready to take it up,” says Kumar.

The piece of land on which Raju decided to implement the model was quite spoiled due to excessive use of chemicals in the past. Hence, he started off by treating it with jiwamrita, an organic fertiliser made from cow dung and urine. After a few days, Raju installed a rain hose irrigation system to ensure optimum utilisation of water with the help of Khetee.

“I grew several varieties of crops and plants including yam, turmeric, potato, chilli, papaya, pumpkin, maize and guava. Since the agroforestry model suggested by Khetee did not involve tilling, nor the use of any chemicals, it increased the fertility of the soil on my land and I was able to garner a bountiful harvest,” says Raju.

The word of Raju's success story made its way through the village of Durdih and gradually many more farmers began implementing agroforestry techniques. At the same time, Khetee intensified its effort towards conducting training and awareness sessions in the form of workshops with the aim of aiding all the farmers in the village to achieve a great yield.

Impacting the lives of thousands

Khetee’s agroforestry model has given a new ray of hope for several farmers across Durdih. The combination of agriculture and forestry has worked wonders and created diverse, profitable and sustainable land-use systems.

“Earlier, I used to mainly depend on rains for a good produce. But now, it feels good to be in control. Since agroforestry involves planting trees amidst crops, water retention is better. However, it takes at least a year for the results to show up. After planting mango and banana trees on my farm, not only do I get to save water and other resources, but also, add a layer of protection from animals destroying the crops, thanks to Khetee,” he says.

“Apart from the training sessions Khetee is organising, the team plans to start a fellowship programme next year where individuals can learn to convert conventional agricultural lands into agroforestry models. This will enable many more people from different backgrounds to learn the perks of agroforestry,” quips Kumar.