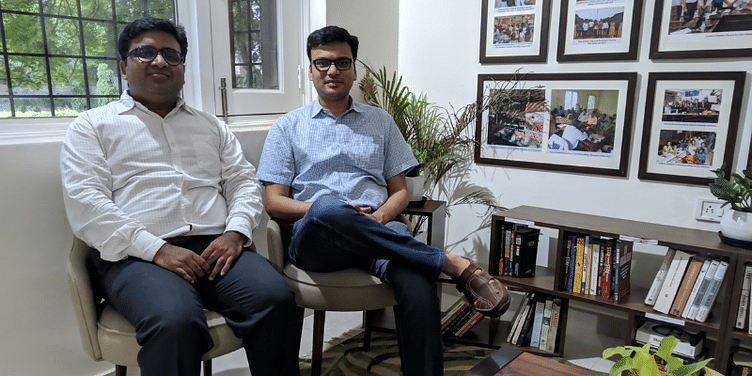 Founded by Gaurav Goel and Ankur Bansal, Delhi-based governance consultancy firm Samagra is helping the Government of Odisha provide a fillip to agricultural productivity and farmers’ income in the State.

We all know agriculture is the lifeline of the Indian economy, with 44 percent of the population deriving their primary source of income from it.

Located along the eastern coastline, Odisha contributes a significant share to the agricultural sector in the country. According to the Activity Report of the Department of Agriculture and Farmers’ Empowerment, about 62 percent of its total workforce was engaged in the cultivation of 40 percent of its geographical area as of 2017-18.

Besides, Odisha also found a place in the government’s list of top 10 agro-climatic zones of the country after taking into consideration a number of factors like climate, rainfall, soil, and topography. In order to leverage this, the State government launched many support systems and welfare schemes – right from loan waivers and budgetary support to technological intervention.

However, agricultural growth and farmer income began to reduce drastically from 2010 onward due to increased pest attacks, loss of crop, and lack of data-driven decisions.

It was only in the end of 2017 that the sector saw some light at the end of the tunnel when the Department of Agriculture partnered with two organisations - The Bill and Melinda Gates Foundation, a renowned philanthropic firm, and Samagra, a Delhi-based governance consulting firm. They started the Analytics for Decision Making and Agricultural Police Transformation (ADAPT) initiative with an aim to improve the welfare of farmers and bring a change in the sector through data-based decision making.

“Through our work as part of the ADAPT engagement are helping around 45 lakh farmers increase their agricultural productivity across Odisha by streamlining the supply chain of raw material, providing customised pest advisory services and delivering information about markets, and modern technologies,” says Gaurav Goel, Founder and CEO, Samagra.

One of the major gaps identified in the space of agriculture policy making and implementation in Odisha was the lack of access to relevant data across the State. In order to resolve this, Samagra is developing a comprehensive Decision Support System (DSS). Under this system, all the data points that were previously available only on disjoint databases are being brought together on one single platform.

The DSS, consisting of data regarding seed quality, cropping patterns and climatic conditions, is being made readily accessible to the government.

“Timely data can be very valuable. The DSS dashboard is being built to provide all historic references needed for administrative functionaries to plan, execute, and oversee government schemes. That is not all. Tracking progress and obtaining details about a particular scheme, season, soil variety or crop has been made possible. Even farmers used certain data sets to analyse seasonal variations, soil health, and input materials,” explains Ankur Bansal, Co-founder, Samagra.

We all know that presence of pests, weeds, and pathogens can lead to low agricultural productivity. Farmers in Odisha also saw a decline in productivity when the crops were infested with pests, weeds, and pathogens. A total of 8,092 villages spanning 1.6 lakh hectares of land were under crop loss. This resulted in a sharp decline in farmers’ income and also placed them in a cycle of debt.

During this period, Samagra began to work with the government and formed a Customised Advisory for Pest Control. Since Odisha is divided into 314 administrative blocks, each having varied weather conditions, there was a need to tailor advisory services accordingly. Samagra first obtained and analysed the weather forecast of all the blocks. Then, it conceptualised a system to create personalised recommendations for pest control for each of the blocks. WhatsApp being one of the most widely used platforms among the farmer community, the firm decided to deliver the advisory through the messaging service. Additionally, the content was sent via SMS and IVRS.

Discussion of farmers’ issues is crucial when it comes to resolving conflicts. Farmer Information and Advisory Committee (FIAC) meetings have proven to be effective. However, the meetings had become defunct in most of the blocks across the State.

“We started off by looking into data with respect to regularity of meetings, matters discussed, and participation rates. What was needed is a more organised approach to things. We then established an agenda for each of the meetings depending on the agriculture season – whether it was the time to sow, apply fertilisers or harvest. This way, not only did the problems faced by farmers get fixed, but it also provided cues for policy making in future,” says Ankur.

The most recent programme launched in Odisha is the Krushak Assistance for Livelihood and Income Augmentation (KALIA) scheme. It was introduced by the government with the help of Samagra as an alternative to loan waivers after it was found that the latter provided only temporary relief to farmers. The idea was to design a package that can cater to mainly small and marginal farmers by providing assistance in the areas of financial, livelihood, insurance and cultivation. Samagra also created a series of algorithms in order to identify these beneficiaries. A total sum of Rs 25,000 per farmer’s family over five seasons has been allotted under KALIA.

The agricultural sector saw a significant transformation after the launch of renewed schemes in 2017. A major turnaround was observed in the livelihood of farmers due to reduced pest attacks and increased productivity of crops.

“We observed 90 percent reduction in pest attacks in our review post the implementation of the Customised Pest Advisory service. The number of villages where pest infestation was destroying crops came down to 1,567. Regular and timely FIAC meetings resulted in farmers being able to overcome challenges through collaboration and discussion. Since DSS ensured the provision of timely and accurate data throughout, policy making and periodical reviewing become a cakewalk,” Ankur says.

The impact of the KALIA scheme is yet to be accessed, but the future does look bright.

“Samagra’s intervention helped us design and implement effective schemes to revamp the agricultural sector in the State. They developed some of the best tools to analyse data, because of which we were able to take corrective actions in different areas. Their intervention played a huge role in monitoring the performance and impact of schemes. The state machinery here is not well-equipped to incorporate technology in its systems. Hence, Samagra’s efforts became all the more important for us to scale up our operations.”

Samagra is a governance consultancy firm that works with the political and bureaucratic leadership of different State governments across India to bring about effective governance.

“We only like to get into situations where there is a strong pull from the state leadership. Once there is alignment on the macro objective, we undertake a thorough diagnosis and jointly develop a comprehensive transformation roadmap for the state. As we co-work with the leadership to catalyse the implementation of this roadmap through the state machinery, constant improvisations are required along the way,” Gaurav tells YourStory.

To implement reforms, Samagra assigns a team to work out of the respective Chief Minister’s Office (CMO) or with the Principal Secretary’s Office for an average time frame of two years. The team also assists the state to execute things on ground – right from developing data tools, structuring incentives, setting up review systems to putting in place all the performance indicators. Once the policy or scheme is successfully implemented and monitored for a reasonable amount of time, Samagra pulls out of the project. The government pays the firm for its services by arranging for a private source of funding.

Note to NaMo: innovations and startups will lead revival of India’s agricultural industry

How Samagra set foot into governance

Samagra was established by Gaurav Goel in 2012. Gaurav Goel, who was working with McKinsey, quit his job in to start Samagra.

“As soon as I resigned, I travelled around India for six months to understand how government departments function on ground – right from the district, tehsil, block to the mandal level. After understanding how the wheels of governance move at the ground level, I decided to start Samagra. I began by working with Members of Parliament (MPs) on various aspects of constituency development. But, later, I realised that we could create a bigger impact by working with various State governments,” Gaurav says.

Today, the organisation consists of 45 employees and has already worked with many State governments like Haryana, Himachal Pradesh, and Andhra Pradesh to design and execute programmes in the areas of education and agriculture. The enterprise is aiming to impact at least 20 percent of the citizens of India through its work in the next few years.