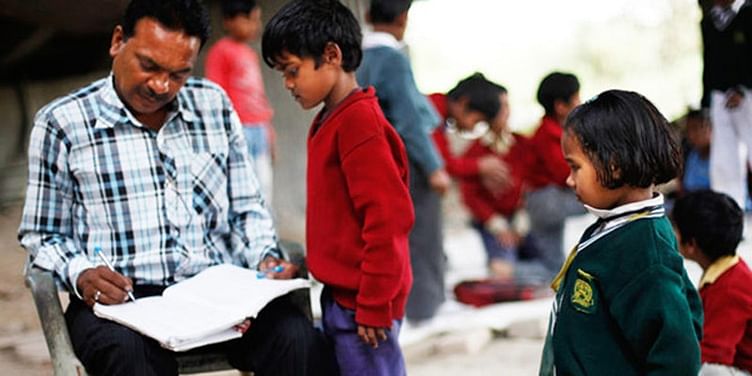 'The Free School Under The Bridge’ runs in two shifts for both boys and girls. It has seven teachers who volunteer to teach the students aged between four and fourteen in their free time

A lot children in India still do not have access to education. Despite various initiatives to promote and encourage children to join school, many find it difficult to pursue an education due to various factors.

But the efforts continue unabated. Rajesh Kumar Sharma is committed to the cause of children’s education and is ensuring that children get the basic education they need to move forward in life.

For the past 13 years, Rajesh has been teaching 300 underprivileged children under the metro bridge near the Yamuna riverbank in Delhi. Named ‘The Free School Under the Bridge', the school runs in two shifts, one from 9-11 am for 120 boys, and the second, from 2-4:30 pm for 180 girls. The school also has seven teachers who volunteer to teach the students aged between four to fourteen years, in their free time.

How these IIT-Kharagpur alumni are transforming lives of Assamese tribal children through a mod...

Unlike other schools, this open school with no structure at all beneath the bridge, has only five blackboards, which is nothing but a black coat of painting on the wall. To help teachers, it has basic stationery like chalk, dusters, pens, and pencils. The students bring their notebooks and sit on the ground that is covered with carpets.

The school has separate toilet facilities for both girls and boys, in addition to which students are also taught about basic hygiene and cleanliness.

Speaking to the New Indian Express about the support he received, Rajesh said,

“Initially, some NGOs contacted me and tried to be associated with the makeshift school, but I never allowed them as they all looked suspicious. None of them were serious about children's education and their future. All they were interested in was making money by showing something and claiming something else. I did not approve of their way of functioning which had many loopholes and room for discrepancies.”

Most of the students are children of ragpickers, rickshaw pullers, and beggars who cannot afford basic education for their children.

According to India Today, some shopkeepers also donate drinking water, which is most welcome during the summer season.

The motive to start school was to address an issue, which Rajesh himself faced during his younger days. Due to the poor financial condition of his family, he couldn’t complete his BSc degree and knows how important education is for children.

Rajesh, who is now the sole breadwinner of his family of five, runs a small grocery shop in the same locality to support them. He now has the support of teachers like Laxmi Chandra, Shyam Mahto, Rekha, Sunita, Manisha, Chetan Sharma, and Sarvesh, who help him run the school.

When Hindustan Times asked him about people’s reaction to the school, Rajesh said,

“Some people visit the school occasionally and distribute biscuit packets, fruits, water bottles, and packaged food. Some youngsters celebrate their birthdays with the children, cut cakes, and have food together by sitting beneath the bridge. Such occasions make them feel they are also part of the society no matter where they live or what background they belong to.”

Rajesh also maintains an attendance record to keep a track of his students, and if someone doesn’t turn up for long, he contacts the parents to know the reason.

Six-year-old Sunita, a student of the school, said, “I want to achieve big in my life and that is why I come here every afternoon. Sometimes, the school is closed due to bad weather like heavy rain or thunderstorms, but my passion for studies never gets weakened,” reports Hindustan Times.