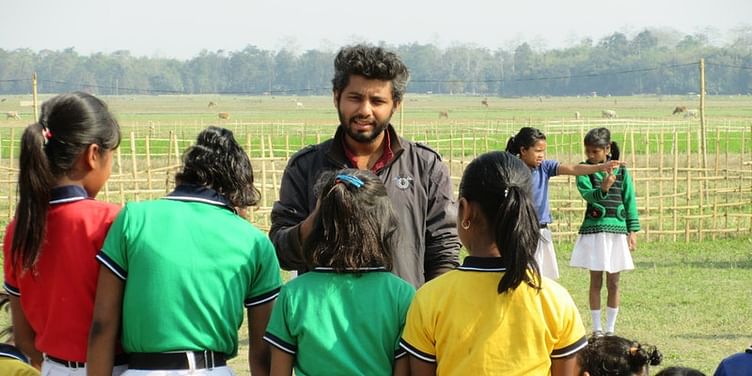 Appun Doley, a 12-year-old Class 8 student at a local government school on Majuli Island, Assam, didn’t know how to read or write English or her native language Assamese. Lacking proper education facilities and curriculum, Apun had a tough time coping with studies.

Her mother, a single parent, decided to send her to the Hummingbird School in early 2017. Apun enrolled to understand basic subjects like Assamese, English, and mathematics. Today, two years later, Apun has been promoted and not only does she speak Assamese, Hindi, and English fluently, she is also the student council president. She dreams of becoming the principal of her school one day.

Apun might have been the first student at the Hummingbird School which started in January 2017, but today there are 240 students that have followed her path to holistic education thanks to IITian Bipin Dhane and others who persevered in their dream of educating the tribal children in the area. The school today serves 19 villages, has 15 dedicated teachers, and 11 non-teaching staff.

The story of IITians who made a difference

Bipin Dhane (30), an IIT-Kharagpur alumnus, has since then empowered 240 children. He founded the school in early 2017, and as principal, he was joined six months later (in July 2017) by his batchmate Vatan Saini (30) as vice-principal,Dharamjeet Kumar (27) who leads community outreach, and Aswathy Preetha Jayakumar (27) who is in charge of curriculum and pedagogy. All are IITians except Aswathy who is from the University of Peace, Costa Rica and Dharamjeet who is from Azim Premji University

“It (the school) wasn’t my (initial) motive. It was something that the villagers needed at that point of time as the community dreamt their children would study at a good school,” Bipin says.

Building a school in a tribal area was a huge challenge and getting the basic facilities to help children grow and learn was an additional task. With the help 19 villagers who donated three acres of land, Bipin was able to construct the school.

The villagers also donated wood, bamboo, and even helped build the school over three-and-a-half months. Bipin adds, “The school isn’t complete yet. We are trying to expand it with new facilities every year; it’s a continuous process.”

Despite having the support of the villagers, there was a larger issue to battle - convincing parents to allow their daughters to study at the school. In time, Bipin was able to convince the parents, and today, the school has around 60 percent girl students.

“We have three types of students, those who study free, others who pay a nominal fee of Rs 250 per month, and the third are sponsored students who gets Rs 1,200 per month through various foundations and organisations across India,” he adds.

Bipin is constanly looking for funds to ensure the school is functional and teachers are paid.

This teacher is leading a silent revolution to transform primary school education in Maharashtr...

According to the annual report, out of 240 students, 60 hostelites and 40 day scholars are being given free education. The residential option for students includes a hostel that houses a majority of girls.

While the school doesn’t follow any board (students are taught from NCERT textbooks), plans are to soon comply with syllabus like the CBSE.

Transforming the lives of tribal students

The students are taught mathematics, science, Assamese, Hindi and English, and other life skills. “The school day is from 8.30 am to 3.00 pm. If students desire, we offer a handloom facility to learn weaving. From 2.00 pm to 3.00 pm there are music classes to train them in singing and vocal skills,” Bipin says.

The Hummingbird School has created an impact in the area but facing the ravage of yearly floods (that submerge the school partially) is tough. During this period, the school goes on a break till the floods are over.

Majuli Island has a population of 1,70,000, with around 900 schools and is situated in the River Brahmaputra. It was given district status in 2016 and is listed as the world’s largest river island by the Guinness Book of World Records.

“One school won’t solve the problem of all the Majuli Island people. More needs to be done to create overall impact. For this, we are turning our school into a model school,” Bipin says.

Bipin and his team are now partnering with other schools to recreate the best practices from their model Hummingbird School. The team has also registered with an NGO for activities beyond the school to generate income - the Ayang Trust, which was registered in November 2017. The team was also selected for Wipro seeding fellowship, EduMentum, and NCore.

Currently, Bipin says, “We are partnering with six government and four private community schools to improve the quality of education under the Whole School Transformation Programme.”

Working with students, teachers, school leadership, and the community, Hummingbird School shares its best practices with partner schools, and the team is working ensuring that the systems they create in the programme are sustained even after they exit.

The school is also working with 15 other government schools through a mobile library-cum-STEM lab programme to provide children with a world of books and foster a scientific temperament. They also started the Manthan Fellowship in July this year to instill interest in education and build skills to engage local youth of Assam as change-makers.