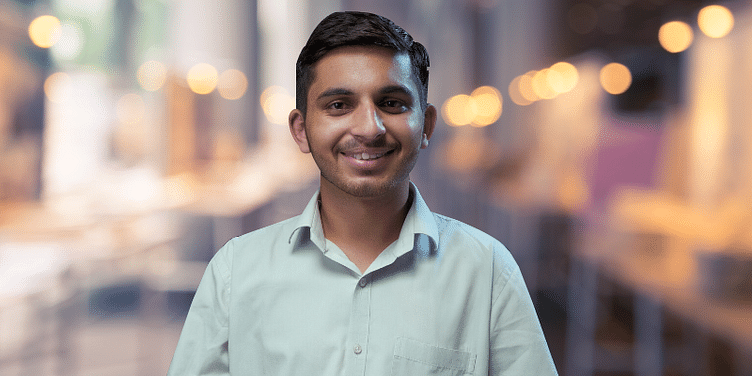 This is the story of a young innovator and scientist who returned to his village to give back to society. After Class 10, Akash Singh shifted to Gurgaon for further studies. After participating in several science and innovation festivals, competitions, and challenges, he worked on projects such as a self-power generating walking stick, a smart irrigation sprinkler, and a wind harnessing machine. His work received accolades from the Ministry of Environment and Climate Change and the Ministry of Micro, Small and Medium Enterprises (MSME).

These experiences led Akash to launch his startup Energinee Innovations, which aims to help temples recycle waste and enable prisoners to get a livelihood.

Since Akash belonged to a village near Jewar in Uttar Pradesh, he had little opportunity for scientific innovations. At a certain point, he realised that many other parts of rural India were also deprived of such opportunities. He decided to return to his community to share the knowledge he had acquired, and inspire other youngsters to hone their skills and showcase their ideas.

His journey started by organising a science and technology fest for school students along with The Douji Temple Committee and the then chairman of Jewar.

During childhood, Akash habitually used to visit temples. He had also interacted with inmates of the GB Nagar District Jail. Acutely aware of the lack of waste management systems at temples and the paucity of livelihood opportunities in prisons, his innovative mind sought a solution.

Invited to conduct a digital literacy workshop for inmates at GB Nagar District Jail at Uttar Pradesh, he found out that a majority would lose their livelihood once they were free due to the stigma of being in prison. He then came up with the idea to transform temple waste into upcycled products and engaged the prisoners in the process.

The 19-year-old was elected an Ashoka Young Changemaker in recognition of his entrepreneurial spirit and his ability to empathise. Through the youth-focused programme run by Ashoka Innovators for the Public, he is now a part of the world’s largest network of social entrepreneurs and changemakers.

“Since I was in Class 10, I wanted to connect with like-minded people who wanted to change the world, and have a positive impact. I was glad when I found my purpose - to not let any waste generated by temples in India reach rivers and pollute the water by upcycling it into something useful,” Akash says.

Energinee Innovations was founded on just this idea in 2018 when Akash was 18, with six other members. The startup helps the incarcerated by providing them jobs, more specifically, the task of transforming temple waste into eco-friendly and upcycled products such as statues, sculptures, and handicrafts.

Today, the team comprises 22 full-time members, all under the age of 25, and has received incubation support at the Atal Incubation Centre in BIMTECH, Greater Noida.

Improving the livelihoods of inmates

Temples across India generate a considerable amount of waste from burning incense sticks and breaking coconuts. This generates mounds of ash and coconut husk, and contaminates local water supply.

Akash and his team collect waste from over 150 temples in Delhi and the National Capital Region (NCR). The waste is redirected to prisoners at GB Nagar District Jail. Energinee Innovations trains and pays the prisoners to upcycle ash and coconut husk into sculptures.

“During the course of my interaction with the inmates, I found that approximately 70 percent were undertrials. These individuals were called ‘criminals’ even though they were awaiting judgement. They did not get any job opportunities after leaving prison. If they work and develop skills while in prison, the chances of getting employed later are better. This was the idea behind involving them," Akash explains.

The organisation has provided jobs to 32 individuals in prison so far, thereby ensuring financial stability. Eager to offer rehabilitation and reformation programmes, 25 of these individuals were even granted permanent bail. Energinee Innovations has helped seven prisoners who were released procure jobs with different non-governmental organisations.

“Before we started our programme, prisoners would spend time within the four walls of a cell. Many were on the verge of losing their mental stability. They became more active after we started employing them. They began to step out, go to the garden, interact with other prisoners. Some enjoyed the work so much that they began working an extra two hours every day,” Akash says.

The venture measures impact by computing the amount of ash collected from the burning of incense sticks per month, the salary provided to inmates each quarter, and number of inmates provided bail every year.

Akash sees the potential in religious and cultural leaders of various communities taking this example as an opportunity to create a culture of innovation and change. He wishes to scale his work with the temple management committee in Jewar and replicate it with various others across the country. He is also expanding his work to the women’s cell to help create sustainable packaging material from jute.