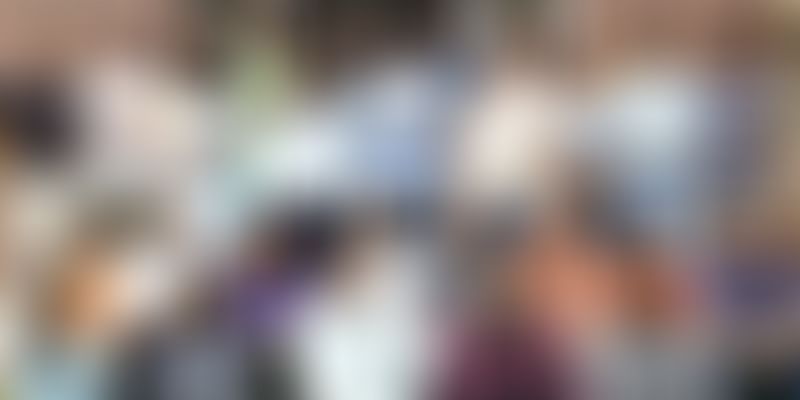 Binny Bansal, who has invested in Udhyam Learning Foundation, believes it ‘teaches students how to fish.’

When Mekin Maheshwari thought about starting up, his mind was focussed on one question only - How were young minds and mindsets being shaped? The ex-Flipkart employee, who has held several CXO level roles in the company, always searched for one crucial element as a leader - an entrepreneurial spirit and drive.

With Udhyam Foundation, he has come full circle with its two modules that focus on inculcating entrepreneurship tenets and mentoring for school students. Today, the programme is active in 1,024 schools in Delhi, where it focuses on problem-solving instead of the more universal rote learning formula India is known for.

“Entrepreneurship and drive are what make everyone take ownership and responsibility, and that comes from training and having a different mindset,” says Mekin.

When he dug deeper, he realised there was a problem in the basic Indian pedagogy. The current education system didn’t make students own a problem or build solutions. He realised that there was a need to create entrepreneurs equipped with the right mindset in India.

The seed idea of Udhyam Foundation started in late 2016. The early pitches and programme commenced in March 2017. The organisation builds curriculum for young students to learn and develop a specific mindset which makes them job creators, and not just job seekers.

The ideation took time and effort. Mekin worked with different organisations and realised that the proportion of students graduating versus the number of jobs in the market did not match.

In November 2018, a report by the Indian Labour Organisation (ILO) revealed that over 18.9 million students were unemployed, and the ones that graduated did not have the right skills to be employable.

Thus, Mekin embarked on a journey to create more job creators than job seekers. “To make us more entrepreneurial, we need to build a programme and system that encourages problem-solving as a thought process in students within the school curriculum,” says Mekin.

Indians are known for an education system that enables rote learning. Mekin changed this educational approach, as he believes, “The reason entrepreneurship works for just a few is because they have not developed the right mindset. If we have to grow as a nation, we need more entrepreneurs,” he says.

He felt that while the human potential to grow is intrinsic and universal, when a child enrols in school, sadly, this potential isn’t realised.

Udhyam Shiksha is a programme developed with NCERT and SER boards - Entrepreneurial Mindset Curriculum (EMC). The curriculum focusses on students engaging in different activity-based learning to help them develop an entrepreneurial mindset.

“The programme has been developed with SCERT for Delhi,” says Mekin. The team began a pilot with 24 government schools in Delhi in April 2019, and currently works with over 1,024 schools. Once the curriculum is set by the NCERT, the teachers are trained in the programme.

How does EMC work?

The course is conducted for students from Grade 9 to 12, and it is the first period of the day. The idea is simple - no reading or writing assignments. Instead, students are given on-the-ground problems and tasks to solve.

The course has over 11 units that involve - decision making, critical thinking, self-awareness, handling failure, and identifying opportunities. These include discussions, activities, story sessions, all of which have been included to help develop and cultivate each of these characteristics in students.

“The idea isn’t about giving them steps or guidelines but seeing if they can come up with ideas and solutions. The premise is to guide them into thinking in a particular way to reach a solution,” says Mekin.

They also have discussions on products, try to understand a student’s perspective and how products can reach the end consumer. “Again, there aren’t any right or wrong answers. The more you question students, the more they are forced to think differently and come up with connections,” adds Mekin.

The use of the curriculum

For the 1,024 schools, the course is free-of-cost. But, Udhyam charges Rs 500 to Rs 2,500 depending on what the school can pay, for private schools in Karnataka.

About the EMC programme, Manish Sisodia, Deputy Chief Minister, Delhi, reportedly said, “Udhyam has been a key partner in the development of EMC. They were the experts who brought in clarity in entrepreneurship mindset development from their past work. Udhyam’s willingness to be hands-on, listen to student voices and experiences, and care about the details helps make the entrepreneurship mindset curriculum one of high-quality. Their belief in this student project made me think of and push for the budget allocation of Rs 1,000 for students.”

However, Mekin and his team had to scour through tomes of research to finally curate the programme. They worked with educators and volunteers to understand what works best, they convinced parents and teachers about the need for such a programme – challenges they have answered head-on.

With the Delhi government adding the programme in the government school module, Udhyam is gaining traction.

“From drivers to tea stall owners to even your house help, today, micro-entrepreneurship is big in India. With Vyapaar, the focus is on these entrepreneurs, to help them fill market gaps and grow their business,” explains Mekin.

The team aims to create sustainable income upliftment of over 50,000 micro-entrepreneurs or Vyapaaris by 2021. The programme trains these entrepreneurs on marketing methods, which the team adds are currently being used by over 20 percent of the Vyapaaris.

Here too, Udhayam focusses on training with activity-based learning modules, that focus on a mindset shift.

Working on the mindset

Udhayam has raised an undisclosed amount of funding led by Binny Bansal, Co-founder, Flipkart. Speaking on the investment Binny says,

“Entrepreneurship solves a very important problem for the country. By building entrepreneurial mindsets, we are setting people up to succeed. I have seen Mekin do this phenomenally well in Flipkart and I am happy to see him scale this thinking to the entire country. Essentially, Udhyam is ‘teaching people how to fish’ and I am excited about the way talent in the organisation is problem-solving for it.”

Today, the focus on skilling is fast growing. A 2018 report by India Skills says around 48 percent of engineers in the country are unemployed, while Pearson Research reveals that 95 percent of Indian engineers are not equipped for development and coding jobs.

Startups like Codevidhya, and Pesto are striving to change the scenario but Udhyam’s focus on building entrepreneurs is paramount.

“I believe that the dream of providing affordable quality education to millions of students in India will be made possible soon by our entrepreneurs. It is definitely one of the key areas of investment for me, given the positive impact it can have on our country and other parts of the world as well,” Binny concludes.

From rescuing stray animals to creating a Maths Lab, the top Social Stories of the week