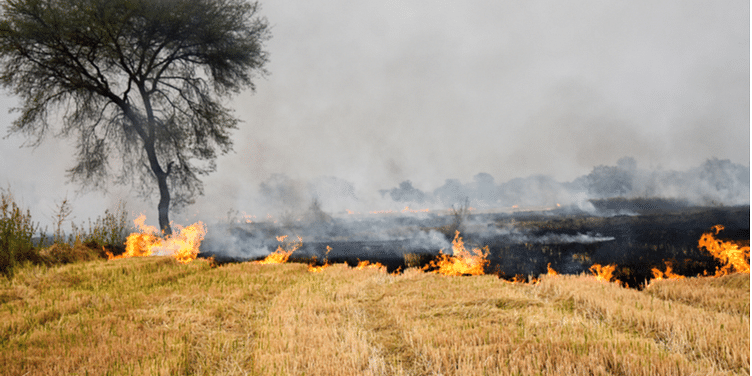 Burning stubble is irrevocably affecting the air North India breathes. Now, the National Centre for Combustion R&D has an answer that is not only economically viable but also helps one breathe easy.

Far away in the idyllic environs of the IIT Madras campus are researchers hard at work at the National Centre for Combustion R&D (NCCRD). Away from the severe pollution, they are breathing cleaner air in Chennai, and also ideating on a process to burn stubble that can be useful in making crude oil and char. The premier entity for combustion research is grappling with solutions to address the grave problem of stubble burning that chokes northern India come October, year after year.

The Supreme Court has ruled that certain northern states should be held accountable, and stop stubble burning. Yet, beyond legal diktats, and news that satellite data shows a dip in stubble burning, it is imperative to look at the economic reasons that force farmers to burn stubble, and how one can envisage commercially viable alternatives. NCCRD might have the answer.

The situation is grim

Presently, straw piles up post-harvest, leaving behind vast amounts of stubble. The straw is sold for utilisation purposes such as biomass boilers which generate power. The stubble itself takes over three weeks to clear up, yet it can be burnt in just three days, leaving behind a charred mass which includes ash that enters the soil, and remains till the next crop is sown.

While the recently developed mechanised stubble removal hastens and eases, it probably requires governmental bootstrapping/subsidies and a rental model, with enough units available for quick deployment within a short period. While this may be possible, by itself it cannot solve the large problem. Power generation from straw in boilers is not economically competitive compared to coal-based thermal power and solar prevalent in other parts of the country.

If the stubble is disposed in a similar manner, additional work is required in removing the soil stuck to the stubble because boilers would be intolerant to such inert matter entering furnaces, and this could aggravate the already slagging and fouling by the ash present in the straw. Biomass gasification is a similar approach, but it is just as expensive today, if not more, and is fraught with similar problems such as direct combustion in boilers.

Besides, transportation of huge quantities of straw to installed boiler/gasifier sites that are relatively large scale also adds to the cost and effort. This in turn is compounded if the stubble were to be handled similarly.

At NCCRD, researchers are trying out a different approach. It is based on the process of hydrothermal liquefaction or HTL. The process is simple - It involves a pressure vessel capable of withstanding high pressure and temperature. The feedstock — in this case, straw and stubble — is mixed with water (and suitable quantities of solvents like methanol or glycerol, plus a catalyst like potassium hydroxide, etc), and the slurry is heated up to temperatures of around 350 degrees celsius which generates steam at pressures of around 180 degree in atmosphere.

In such conditions, close to the critical state of water, the feedstock dissolves and over time (half an hour or an hour), it is converted into crude oil. HTL has been attempted around the world for biomass, and in particular for algae and is targeted for its high yield.

The yield of crude oil depends upon all these operating conditions being met. Most importantly, the level of solvent used that has a bearing on the cost of the crude produced. The remainder of the original feedstock mass gets converted into gas and char. Lesser the yield of crude, as dependent on the cost afforded for the solvent to remain competitive with petroleum crude, the greater is the yield of char, which is just as valuable. Laboratory trials have been done with not only paddy straw, but also rice husk, sugarcane bagasse and more interestingly, unsegregated municipal solid waste.

The crude has a calorific value of around 35 megajoules per kilogram, which is quite good, and the char is typically comparable to the sub-bituminous coal variety with fairly low ash content, making the process net energy positive. Basically, the entire process mimics what Mother Nature does to organic waste matter underground over millions of years in forming coal, petroleum, and natural gas, but in a hugely accelerated fashion!

Initially, small portions of Xcrude could be blended with the petroleum crude used in a refinery, and progressively greater proportions could be used, thus decreasing the oil import burden to the exchequer. At NCCRD, another innovation called the “swirl mesh” lean direct injection burner has been developed and plugged into a micro gas turbine engine made by another startup Aerostrovilos for small-scale power generation at the level of 100 kW.

This burner is fuel agnostic, and can take any fuel, liquid or gas, without distinction between petrol, diesel, kerosene, furnace oil, CNG/LNG, LPG, biogas, syngas, hydrogen, flare gas, etc. This engine is also being pursued for onboard power generation in EVs as a range extender, and can be used with any of the above fuels as economics demand. When this process becomes seamless, the need for going to a refinery with the Xcrude itself would be obviated, thus reducing the cost of transportation significantly.

Quite interestingly, any sulphur contained in the feedstock doesn’t get into the crude, as this might contaminate the downstream petroleum products that can adversely impact the engines using them through the emission of oxides of sulphur into the environment, but this stays with the char.

Farmers can choose to plough back appropriate quantities of the char from this process back into the soil for the latter’s abatement, just as they leave the char after the stubble burning in the soil at present. Any remaining char could be used for different purposes since a market exists for this commodity. The HTL process would tolerate the soil stuck to the stubble, as that would be part of the inerts in the char, which can go back to the soil itself. So, the stubble can be directly used in the HTL reactor with no additional efforts.

The gas evolving from this process has not yet been analysed thoroughly at this lab, but it predominantly consists of carbon dioxide, with small quantities of combustibles. So, this could potentially be useful. The Aerostrovilos micro gas turbine can handle very low calorific value gaseous fuels too, thus this gas can be directly used there. In the recent past, compressed biogas is being bottled by removing carbon dioxide, making it equivalent to CNG.

A similar process could not only enrich the gas from the HTL as well, but also isolate the carbon dioxide for its utilisation in making methanol as another fuel, in combination with hydrogen obtained from splitting of water. Novel water splitting methods using a nano-aluminum cycle are being pursued at NCCRD for this purpose, and also to desalinate water or extract pure water from human urine!

At present, scale-up studies are being undertaken on the HTL process at the lab. Over the next year, a 1,000 litre capacity plant that is capable of handling about half a ton per day in batch mode is being planned. Similar scale continuous mode reactors are also being planned to facilitate further scale-up. We anticipate that the batch mode 1,000 litre plant itself is a good starting point to be installed in every village (and in towns and cities too to utilise MSW), as a distributed crude generation unit.

Once safety precautions to protect the user from the high temperature and pressure are in place, the operation itself does not require much skill, thus this can generate local employment. Numbers worked out for this scale of operation indicate a payback period of a year with an investment of approximately Rs 1 crore per unit, a reasonable ask.

Imagine Punjab, Haryana, and Uttar Pradesh, and indeed, all parts of India generating all kinds of agri and municipal solid waste to become the next Persian Gulf - generating all the crude we need from across the country without burning any stubble? That would be a deep breath of fresh air, indeed.

These 5 NGOs are working towards uplifting rural women across India