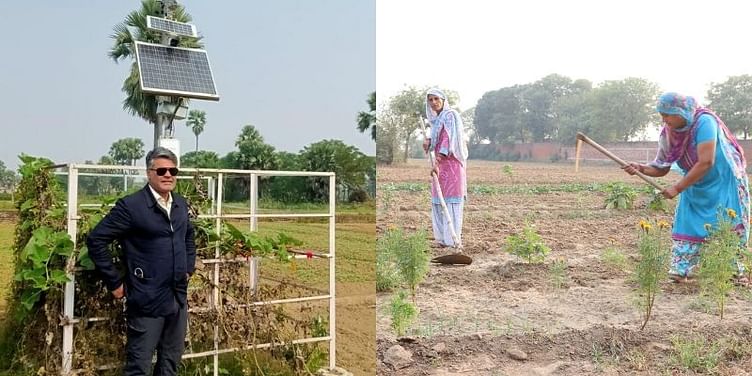 Spacetech startup Skymet has helped more than 20 million farmers across India with its data-based weather predictions, customised for different crops.

“There are some who question the relevance of space activities in a developing nation. To us, there is no ambiguity of purpose. We do not have the fantasy of competing with the economically advanced nations in the exploration of the Moon or the planets or manned spaceflight. But we are convinced that if we are to play a meaningful role nationally, and in the community of nations, we must be second to none in the application of advanced technologies to the real problems of man and society.”

While we have made a mark when it comes to space activities, competing with global leaders, Vikram Sarabhai's vision is not forgotten. ISRO and several spacetech entrepreneurs are using space-based applications for the betterment of society and the nation. Take Noida-based Skymet as an example.

Over the years, unpredictable and irregular weather conditions have caused unprecedented loss of capital and produce. This, in turn, has caused inflation in food prices and even farmer suicides. Accurate weather predictions can go a long way in mitigating this crisis.

To solve this very issue, Skymet has installed over 7,000 AWS (Automated Weather Stations) to generate real-time weather and crop monitoring data to extrapolate weather parameters in the near term.

Founded by Jatin Singh in 2003, Skymet is now present across 20 Indian states, mostly in the western and southern parts of the country. The startup uses satellite data in sectors like agri-insurance.

The spacetech startup has helped more than 20 million farmers across India to date. Besides, it has also installed 300 field-based air quality monitors across 55 cities to track PM 2.5 and PM 10.

Bringing all stakeholders together

Skymet’s USP lies in its ‘community of practice’ where it organises farmers’ meets where discussions are held on the adoption of best practices to be more productive and effective.

Jatin says, “In the community of practice, various stakeholders in the agricultural sector like district agriculture officials, agricultural research institutions, banks, farmer organisations, and NGOs are brought together.”

The startup also deals with risk-management in agriculture, a topic often ignored – agri-insurance. Skymet facilitates insurance through the government of India’s flagship programme – the Pradhan Mantri Fasal Bima Yojana (PMFBY). This helps a farmer to cope with climate-induced shocks.

In 2009, Skymet’s weather forecasting services were included as a part of a corporate product launched to provide technology and data analytics solutions to farmers in India.

Earlier in 2008, the spactech startup has also designed an app to forecast the weather for the basic phone application designed with the rural Indian’s requirements in mind.

Understanding the nature of satellite data

“The primary data sources can be categorised into two broad categories – national space agencies of different countries and commercial satellites.”

Data and images captured and analytical products prepared from the former are generally free or cost very less compared to commercial satellites.

“If a crop type map is to be prepared, we procure raw satellite images from sources which are then studied by our satellite data interpretation experts. Along with their inputs and extended field surveys, we come out with area-wise acreage estimates of key crops like soybean, paddy, cotton, groundnut, etc., well before they reach markets, thus helping the stakeholders to plan their related crops well in advance.”

“We have more than a decade of satellite data in our archive, which is analysed through big data analytics, tuned machine learning (ML) tools and artificial intelligence (AI) for improved estimates and forecasts.”

Jatin did his master’s in International Relations and Affairs from Boston University and worked with a television producer. But after learning about the state of weather forecasting in India, he was quite intrigued.

Besides, his interest in weather goes way back as his father was a long-time vendor to the India Meteorological Department (IMD).

Already familiar with how IMD handles weather data, Jatin’s idea behind Skymet was very simple – provide weather forecasts with a modicum of higher efficiency than the IMD did.

Overcoming challenges and the way ahead

One of the constant issues faced by the startup is competition form public organisations that have high budgets.

Fortunately, Skymet has been able to carry out its research and development functionalities within a limited budget. The startup has raised three rounds of funding and has partnered with many state governments, and University Corporation for Atmospheric Research (UCAR), United States Agency for International Development (USAID), the World Bank, several NGOs and universities.

Jatin adds, “The hardware is the core strength of any meteorology-based player. Skymet has overcome this by manufacturing and installing its own sensors.”

The startup has a team of more than 300 individuals. It has won awards including the India Business Leader Awards, Global Index Insurance Facility (Managed by the World Bank Group), Agri-Business Summit and Agri Awards 2019, Code Studio 2019 – India Technology Awards (Best Implementation of Technology by/for an Agriculture Sector Enterprise), and India Agri-Business Award (Awarded by the Indian Chamber of Food and Agriculture).

Claiming that the market is growing, Jatin says,

“As climate change is playing havoc with nature, data and analytics is the only solution for this. This market is only going to boom – every sector is now depending on getting accurate climate solutions.”

In the future, Skymet looks forward to providing better analytics and data to not only help farmers but also other entities like the government to curb issues like pollution.

Skymet can also provide customised solutions based on Internet of Things (IoT) which would cost depending upon the combination of datasets requested by clients.

These divers in Vizag are on a mission to clean the sea and have already cleared 5,000 kg of trash