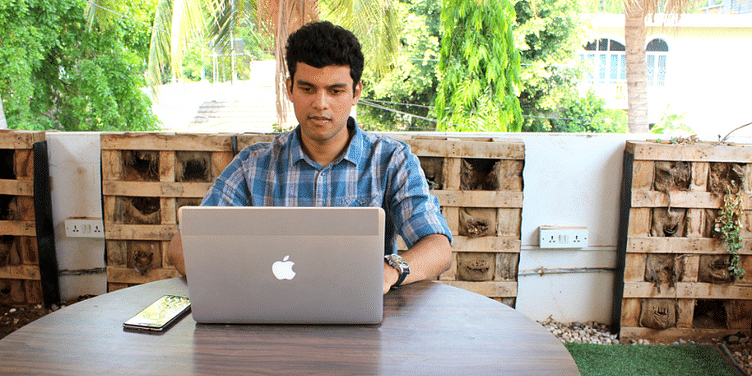 Founded by Rahul Adhikari, International Changemaker Olympiad provides a platform for students to tackle real-world social problems and work towards the welfare of the community.

When 13-year-olds Devanshi, Saanvi, Tannushree, Aditi and Absam saw a few visually-challenged girls near their school, they wondered if they could do something to help them.

To find out more, they went to the nearby school for the blind, interacted with the students, and learnt that they wanted to read storybooks in their spare time, but were unable to.

After coming back from the school, the young minds brainstormed and found a creative solution. Why not record the storybooks in the form of audio clips for visually-impaired children? They soon tested their idea, recorded a couple of stories, and went back to the school. The children loved the stories and soon this small idea turned into an initiative called Once Upon a Time. In just three months, they recorded more than 10 storybooks and helped the children enjoy the world of stories. Today, they are all set to expand this initiative.

This is a great example of young people trying to bring a positive change in the society. This is also just one out of a thousand initiatives that was set in motion in more than 20 cities in India by 25-year-old Rahul Adhikari and his organisation International Changemaker Olympiad (ICO), that has made it possible for students to lead and create an impact on various realms of the community.

Rahul recalls his schooling and how it influenced him as a child.

“The education system in our country is centred around marks, certificates and individual performance, and this dominates our view of success. We are constantly told by our teachers and parents to get better grades than others, get a better college than others, and get a higher paying job than others. This constant competitive battle engulfs us in a “me-focused” mindset as we grow up, rather than a “we-focused” one, and we keep thinking about our own welfare,” Rahul says.

Consequently, children leave schools with good grades and may get decent jobs, but lack sensitivity towards the world around them. This results in a largely apathetic and ignorant society where hardly anyone cares or takes action to contribute positively to the community.

Troubled by this, Rahul wanted to create opportunities for children to develop empathy, compassion, and action-oriented skill sets. He quit his high-paying job at Simplilearn, an ed-tech startup, and founded the International Changemaker Olympiad (ICO) to provide an opportunity for young students across schools to enjoy the challenges of the real world and exercise their power to create waves of transformation.

Empowering children all the way

ICO gives children in schools a platform to launch their own initiatives to tackle social and environmental problems. In ICO, students participate in teams, identify a problem in their home, school, or community, and develop a solution that can be implemented and scaled in four to five months.

For instance, a team of 12-year-olds saved 81,000 litres of water after selling water-saving devices (aerators) to over 120 people and helping them install the same in their taps.

Another group of students saved 800 kilogrammes of food by collecting extra food from their hostel mess and donating to an orphanage regularly. The objective of ICO is to give a real-world problem-solving experience to students and sensitising them during the early phases of their lives.

Rahul believes that deep learning happens only when one has the autonomy to make their own decisions and the same has been ingrained in the ICO experience. While working on their initiatives, all decisions are taken by students, right from choosing the problem they want to tackle to forming their own teams to deciding how they want to solve it. Each team is provided with a trained mentor whom they can turn to for guidance while implementing their initiative.

Creating a long-term impact on children

ICO has empowered over 20,000 children from 20 cities across the country till date and has facilitated the launch of thousands of initiatives. Due to its innovative model where mentors interact with children remotely via video/audio calling or messaging, any child immaterial of their location, can participate in ICO and launch a long-term entrepreneurial initiative to solve social problems.

Keerthi Mahadevan, a 15-year old student from Bengaluru, had started an initiative called “Code Red” to spread awareness about menstrual hygiene in government schools in ICO 2018.

One year post her ICO experience, she independently started interning with an NGO that works towards creating awareness about cerebral palsy. Keerthi says,

“The ICO experience opened my eyes towards the impact sector. I did not know anything about social change, but after I came across ICO and launched my own initiative, I just fell in love with it and realised my own potential in contributing to it. That’s why I have started working with another NGO now as I want to keep creating positive change throughout my life.”

This is a common feeling shared by most ICO participants. In a detailed anonymous survey, 91 percent of students, after their ICO experience, said that they felt empowered to initiate action.

Anupama, a support teacher from eVidyaloka at UHS Chengarbasa, a government school in Jharkhand whose students have participated in ICO, says,

“Seven initiatives have been started by 28 children from our school solving various problems in their village, like creating awareness about basic first aid including CPR, stopping open defecation and using toilets, conducting yoga classes at school children’s well-being, etc. This in turn has raised the quality of government schools so much so that more children from the nearby villages have started pouring in for admission.”

Rahul’s efforts in creating this innovative platform for children has not gone unnoticed. ICO recently won the “Oscars” of Education at the Reimagine Education Conference in London, an award that celebrates and rewards global innovations in education. ICO has also been selected for the UnLtd India incubation program that is designed to support high-potential social entrepreneurs and their organisations.

Rahul was aware that his organisation would not be capable of providing support to all the children, and so, in order to scale the impact, he decided to partner with other organisations in the sector to promote and implement ICO within their network. ICO has already collaborated with enterprises like Teach for India, Ashoka, ISLI, Smart Village Movement and EvidyaLoka. In fact, more than 50 percent of the schools participating in ICO have been coming from such network organisations.

“Our vision is to empower every child in the world to grow up as an empathetic and action-oriented individual, and create a society where all stakeholders in the education system like parents, schools, NGOs, Government are equipped with the knowledge and tools to lead children towards the same direction,” Rahul says.

To achieve this, ICO is also working to make open-source Changemaker Education ToolKits for each of these stakeholders with a view to enable them to implement and replicate programmes for children on their own.