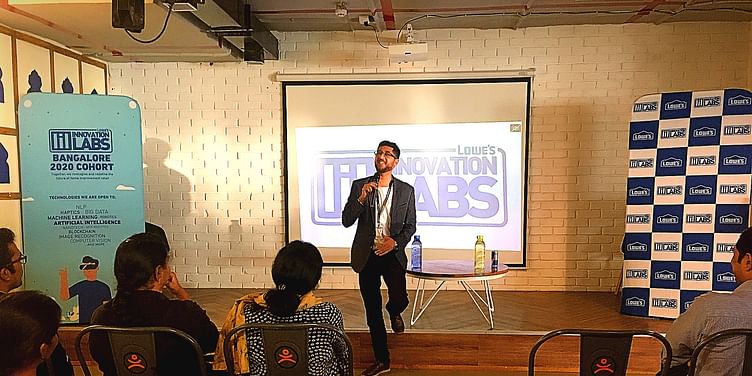 The innovation hub of global retail chain Lowe’s Companies is reimagining the operating model of a typical startup accelerator, and creating a clear and tangible win-win situation for all stakeholders.

When Lowe’s Innovation Labs (LIL) set up operations in Bengaluru in February 2016, the goal was to work closely with startups in India and help them transition from a product-market fit stage to a prominent go-to-market stage.

The Future is here at Lowe’s: The global retailer could take Indian startups to space

In addition to being a knowledge-sharing platform, it was also a way for the retailer to accelerate and deliver experiences their customers and associates expect while developing tomorrow’s capabilities.

YourStory recently caught up with Abhay Tandon, Director and Head of Lowe's Innovation Labs India. He spoke to us about how he has been reimagining the operating model of a typical startup accelerator on the premise of innovation by creating a clear and tangible win-win situation for all stakeholders involved.

He says, "I often come across this question on what exactly I mean by ‘acceleration for stage-agnostic startups’. By definition, I mean you don’t have to be an early-stage startup. It’s how you accelerate the growth of a startup through only innovation."

According to Abhay, once you define that goal, it no longer matters whether an accelerator works with a large startup, with multiple rounds of funding, or a two-member team that has strong core capabilities in technology.

Speaking about how LIL was different from other private accelerators, Abhay says that while the latter focus on growth and acceleration of early-stage startups, when it comes to corporate innovation and subsequent acceleration, LIL looks at the entire cycle from the perspective of co-creation and collaboration.

“The goal is to bring the right kind of innovation through these startups so that Lowe’s can serve its customers and associates better while creating the future of home improvement. However, corporate innovation in a market like India comes with its own share of challenges,” he says.

To illustrate his point, he talks about how Proofs of Concept (PoCs) play a major role in the innovation ecosystem.

"More often than not, an innovation team’s involvement is limited to executing PoCs, post which, the startups are left to interface with business stakeholders, product development and integration, by themselves. Very often, startups do not manage to land a larger contract after the successful completion of a PoC."

The innovation strategy at Lowe's is to move a step ahead, get business alignment upfront, and help startups figure out a product roadmap and building process, to ultimately build a successful product. Abhay says he is trying to create a mutually beneficial setup in India for every stakeholder involved.

When LIL entered the Indian market four years ago, there was no clear concept of a paid PoC system in the corporate innovation ecosystem in India. Additionally, the buzz around the accelerator was also in its nascent stage.

“Today, models have evolved significantly, and things are coming to order. However, there still are a few inefficiencies that could be eliminated,” Abhay says .

"There was a time when corporates would invest a small amount of money for a small share of the equity. But, they have now realised that it is not the only model. There is a need to build a strong relationship towards achieving a clear RoI for all stakeholders," Abhay says . He adds that LIL India has taken a well-thought-out approach that cuts through incremental and disruptive innovation.

During a recently concluded tour across the country, Abhay and his team visited five cities, starting with Mumbai, and subsequently covering Hyderabad, Delhi-NCR, Chennai, and Bengaluru. Over three days spent in each city, more than 300 applications were collected across all sectors. Abhay says LIL’s priority is to focus on deep-tech startups.

He explains, “The categories can be broadly different, but the main focus is to help contribute to retail tech. Under this umbrella, the focus can be towards retail tech startups that bring in efficiencies across legal tech, HR tech, fintech, marketing tech, etc., and emerging tech. LIL also looks at futuristic or emerging tech, including nanotechnology, haptics, robotics, and drones.”

Abhay believes that all these categories contribute to retail tech, where the strongest growing category is home improvement, where Lowe’s operates. Speaking of how Lowe’s helps these startups understand unit economics and market codes, he says it is a combination of both go-to-market strategy and product-market fit, and that both go hand in hand.

He says, "Product-market fit is something that evolves as the startup continues to penetrate the market and technology applications. So, collaboration is key to identify multiple partners and co-develop strong and innovative solutions. People often talk about personalisation for customers, but nobody talks about customising for partners."

According to him,  partnerships can prove to be extremely effective with the right impetus. “Certain parameters go to the core of how evaluation is done. However, the founder should also be willing to be receptive to these ideas,” Abhay says.

85-year-old tribal woman clears literacy exam in Kerala, proves you are never too old to learn

This 22-year-old entrepreneur has set up a multi-crore IT firm by using Google, caters to 15 countries