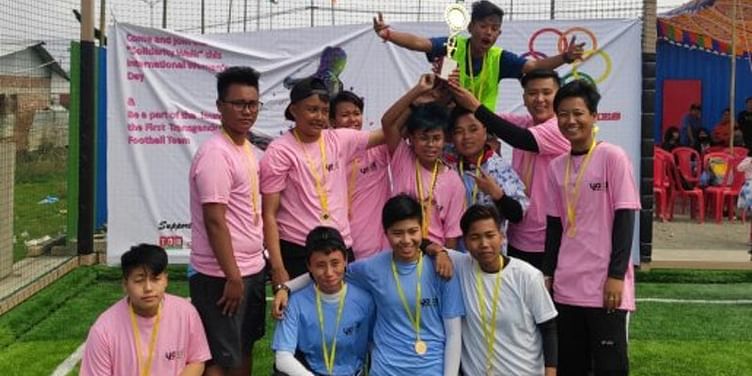 Imphal-based NGO Ya-All has put together a team that not only plays football but also battles prejudice and stigma.

An all-transgender football team from Manipur was launched at the Queer Games event in Imphal, during the colourful festive season of Yaoshang on March 8.

The first-of-its-kind team in India was put together by Ya-All (Yawol), an Imphal-based NGO.  Founded on May 17, 2017, Ya-All is a youth-led network of LGBTQ people and allies.

Since its inception, the organisation aims to create a safer environment for the queer youth of Manipur, while battling stigmatisation and discrimination. By setting up safe spaces for the queer youth that cannot migrate, Ya-All is also catering to the mental health and well-being of many people.

“They were so happy after the match that it gave us encouragement to have similar matches in the future too,” Sadam Hanjabam, Founder of the NGO told Deccan Herald, after witnessing the team play a seven-a-side match in the city.

Chaki, the 24-year-old vice-captain and a native of Imphal West district, was never allowed to play a football match due to being a transgender person.

“We wish to be a part of the state, national, and international level football tournaments under the transgender category. We hope other players come out so that we can compete, improve ourselves, and create strong transgender teams,” Chaki told The Hindu.

The team members are mostly students of physical education, and pursue football as a hobby. The NGO wants to build a stronger transgender football team, but there is difficulty in obtaining the necessary resources.

Chaki states that the difficulty a trans-person faces when it comes to pursuing a sporting passion is redundant and prejudiced. This rejection and isolation from the sporting community goes against the true essence of sportsmanship.

“Our purpose is to help them enjoy their identity and provide a platform to prove that they can do things together. This will help change our society’s mindsets towards the third gender,” Hanjabam told Deccan Herald. Hanjbam is a PhD fellow at the Tata Institute of Social Sciences, Mumbai.