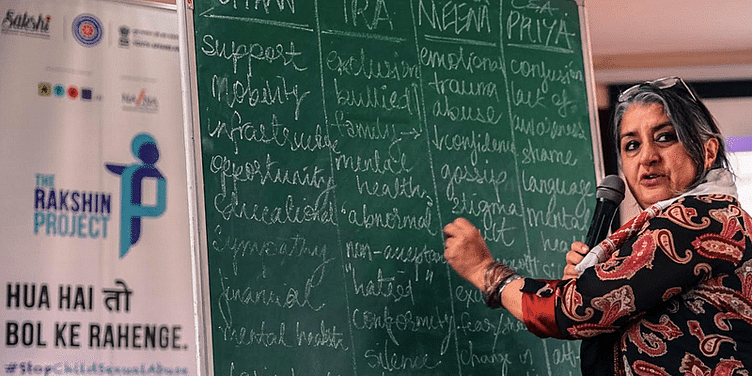 #MakeHomeASafeSpace is a free digital campaign that provides people with aid, information, and tools to address child sexual abuse.

Childhood plays a very important role in all our lives. Circumstances, events, and experiences that manifest in most people’s early and teenage years shape them into the people that they become eventually. And, abuse of any kind — verbal, physical, mental, or sexual — leaves behind deep wounds which can lead to traumatic mental health concerns.

In a country like India, one out of two children experiences some form of sexual abuse before the age of 18, mostly by a family member, or someone close to them, indicating the strong need for awareness.

Further, among citizens, it becomes imperative to understand why it is important to be accountable, as a collective, for such violations of people’s privacy, dignity, and integrity.

What’s being done about this?

While many organisations – small or large – have been actively involved in fighting this evil in our society, Sakshi, a Delhi-based organisation, has been able to formulate stringent sexual harassment laws in the country.

Registered as a non-governmental organisation in 1992, Sakshi has paved the way for those working against sexual harassment and child sexual abuse in India. Naina Kapur, the Co-founder and former Director of Sakshi, was an active force behind The Vishaka Guidelines 1997, which had been crucial in the formation of the Prevention of Sexual Harassment (POSH) Act in 2013.

As an organisation, having acquired years of experience in behavioural change communication, Sakshi has started a digital campaign for the general public.

In the wake of the novel coronavirus pandemic, Sakshi has launched a digital (video) campaign #MakeHomeASafeSpace, communicating the importance of an accountable adult community — which is alert, informed, and vigilant — to secure their homes against potential abuse of children.

“I could have picked sexual harassment, sexual assault, or marital rape to work on, but I chose child sexual abuse because that’s where it starts. These traumatic violations are repressed and suppressed, leading to mental health issues, as adults that none of us wants to take responsibility for.”

Why a digital campaign?

The lockdown during the pandemic across the world has caused an immense surge in the rise of gender-based violence, and child sexual abuse. As a relief response to this, the NGO has adapted its on-ground capacity building programme with ‘The Rakshin Project’, initiating free online sessions that are open to all on how to prevent, prohibit, and redress gender-based violence and child sexual abuse.

"The project equips a generation of young adults with information, know-how, and the language to speak up and prevent child sexual abuse. And if they have experienced it themselves, it helps them in accepting, acknowledging, and moving towards healing and resolution,” adds Smita.

According to ChildLine India, a helpline service provided by the Ministry of Women and Child Development, Government of India, within 11 days of lockdown, over three lakh abuse cases and 92,000 SOS calls have been reported. The demand for child pornography has also increased during the lockdown.

“The idea of reaching out to youth is really simple. Each student we are reaching and educating to be a preventer has a family. Each of these students is tasked with a simple action – Each Teach Two – one older and one younger family member,” she says.

These online sessions and webinars – which are attended by both adults and children – take place once a week and offer viewers with knowledge, information, and tools to recognise, prevent, prohibit, report, and redress gender-based violence and child sexual abuse in families and communities, thereby empowering people to be Rakshins (protectors).

During this lockdown, when individuals are required to stay at home, it becomes important to make home a safe place for children.

Topics regarding child sexual abuse, the law that pertains to it such as Prevention Of Child from Sexual Offences (POSCO) Act 2012, consent, personal boundaries, reporting and resolution mechanisms, how to facilitate environments, create safe spaces, and an attitude of empathy and care towards victims and survivors, are largely discussed.

Catering to people between 18 and 22 years, Sakshi’s webinars are designed in a manner where both adults and teenagers can strike a conversation, as well as have roles to play when working towards preventing child sexual abuse. Over 3,500 people have registered for Sakshi’s online sessions so far.

Shedding more light on how prevalent sexual abuse, slut-shaming, and cyber harassment are among teenagers in India, is the devastating existence of an Instagram group called ‘Bois Locker Room.’

The closed group, which was recently disclosed publicly, has teenage boys sharing private pictures of girls – some who are even minors – without their knowledge or consent. The endgame of this was passing vile and lewd comments and issuing threats, many of which encroached the dignity of the victims.

Registering for this workshop would allow one to explore their rights, know how to call for safety, and learn how to spot signs of abuse or predatory behaviour.

According to Smita, if families acquire a comfort around the language to prevent child sexual abuse, and can have a conversation on what to watch out for, and how to call out the behaviour without succumbing to the barriers of denial, silence, shame, and stigma — half the battle is won.