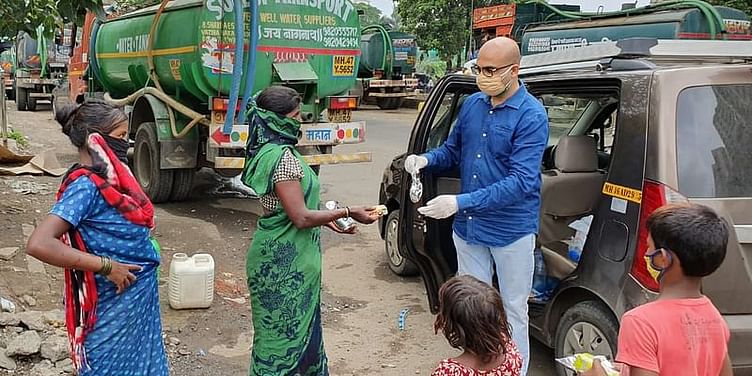 With a well-coordinated team of volunteers, KhaanaChahiye.com has distributed more than 37 lakh meals to the hungry during the lockdown, along with providing dry rations and arranging transportation facilities.

If the coronavirus pandemic has made us realise something it is that food can never be considered a luxury, especially to those who live hand-to-mouth. Millions of migrant workers and daily wagers were left stranded in cities, unemployed, and without a source of food when the nationwide lockdown was imposed on March 25.

To help them and feed the poor, KhaanaChahiye.com was started as a social initiative by Litmus Test Project and Project Mumbai. Being a completely citizen-led initiative, the team plotted a ‘hunger map’ and linked it to restaurant kitchens in Mumbai, making it easy for the teams to target the right places.

"KhaanaChaahiye has been a movement which symbolises Mumbai — people coming together selflessly and helping out those in need," says Shishir Joshi, Co-founder of Project Mumbai.

“We first created what we call a ‘hunger map’ of Mumbai and linked the necessities to the nearby restaurants,” says Pathik Muni. “Thanks to some of our members who were a part of the Restaurants’ Association of India, we could activate some of the dormant kitchens.”

Once the places with most requirements were mapped, the team would research the NGO activity in the area. If an NGO is already working to provide meals, they would ensure that there is no overlap of the work, and would target other areas in the vicinity.

Understanding that they needed more than dry rations, the team initially cooked meals and distributed them to the stranded migrants. They also ensured that the food is hygienic and nutritious with a calorie count high enough to be sufficient for a day. The meals consisted of daal-rice, aloo-sabzi, and rotis.

The team targeted areas like the Western and Eastern Express Highways, SV Road, Link Road, and LBS Road – running parallel to Mumbai – along with pockets in Dharavi, Mahalakshmi, and Lower Parel among many others.

Towards the end of the lockdown, the team distributed dry rations, apart from arranging their transport at the exits of the city – Thane, Dahisar, Panvel, and Vashi.

As per the demands of the times, the team pivoted further into the RationChahiye initiative with state government, Ghar Bhejo initiative with Sonu Sood to send people home, and food for passengers travelling though Shramik trains and buses. All put together, the team had been distributing over 90,000 meals per day.

"The operations at the stations were really tough as sometimes we had to cater to 45 to 50 trains in a day from one station alone, and thanks to the dedicated and committed volunteers of KhaanaChaahiye, we could achieve this seamlessly," says Neeti Goyal.

With the help of the many sponsors, they distributed theplas, bananas, dry snacks like Parle-G, water bottles and other essential items that had a shelf life of more than seven days.

The initiative gained popularity in no time and had more than 200 volunteers at the peak time. Through their crowdfunding on Efforts for Good, they raised more than Rs 10 lakh in the first four days.

“Though initially, we all started pooling in from our own resources, we got tremendous support from Wipro, Paytm, Parle G, Star TV, Essar, and many corporates, in addition to raising over Rs 95 lakh from the crowdfunding platforms and about Rs 5 crore from donations,” says Anik Gadia, the in-charge of finances and accounts. "Despite the previous lows, our finances are running smoothly as of today."

Their efforts even drew the attention of celebrities like Sonu Sood, Dia Mirza, and Abhishek Bachchan. Singer Palash Sen even conducted an online fundraiser show for KhaanaChahiye.com, and donated a good amount to the NGO.

While many NGOs are distributing meals and rations, KhaanaChahiye.com garnered its volunteers through social media and on the internet due to then ongoing lockdown.

"Khaanachahiye's amplification has been driven by micro campaigns by citizens," says Swaraj Shetty, the in-charge of digital outreach. "We have been able to reach 8 million on social media organically because of the community partnerships we have stitched together."

The team sourced their volunteers from all walks of life – doctors, chefs, musicians, actors, digital marketing professionals, fund managers, IIM. Graduates to Corporate Honchos, CXOs from corporates like the Tata Group, Birla Group and so on.

“We were able to use their skills sets in various roles be it Kitchen Quality, Supply Chain Management, Digital Marketing, Fund Raising to Volunteer Management, Accounting Finance and backend roles,” says Maanoj Shah, the in-charge of volunteer sourcing.

One of the volunteers even made a rap song for the initiative.

“We explained the ‘Dos and Don’ts to our volunteers to ensure maximum safety including the safety of their family members,” says K K Mookhey. “Hair masks, face masks, and gloves were of primary use, and social distancing was highly encouraged.

During the peak, the initiative had more than 135 volunteers contributing towards different tasks, and worked together as a team, spending almost 20 hours a day in voluntary work.

“It's been a privilege to be part of such an impactful movement,” says Kartick K N, one of the volunteers. “This has been a humbling experience that has enabled me to see my own privilege and understand that giving back by helping those in need is the best way to acknowledge it.”

“With the lockdown and hunger staring on the face of my fellow Mumbaikars, I could not have stayed at home busy with hobbies and webinars. This is where I found myself lost in,” said Rakesh Singh, Founder of Bharat Utthan Sangh.

Though the initiative was started within a short period and on an urgent basis, it saw great success due to meticulous planning. Despite that, the team does not plan on becoming dormant, but aims to make KhaanaChahiye a permanent project.

Talking about the road ahead, Ruben Mascarenhas says, "We are also setting up a hunger map of Mumbai, in collaboration with the BMC and the Dr Babasaheb Ambedkar Centre for Social Justice, a joint initiative of Mumbai University and LSE. The hunger map will serve as a repository of various data sets and an important tool in setting up an ecosystem in solving the problem of hunger using all stakeholders."

5 startups by ‘green entrepreneurs’ whose products are environmentally sustainable