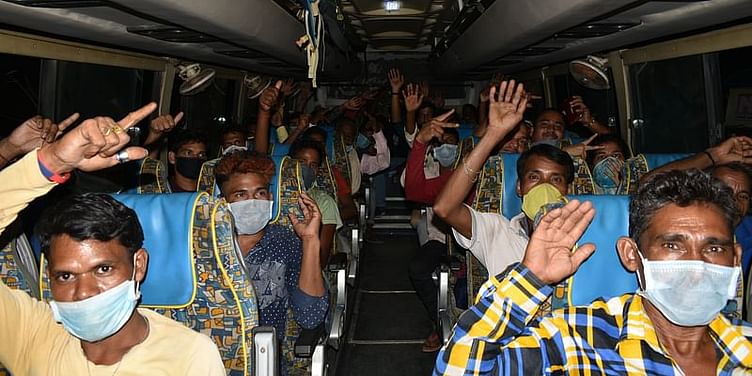 Stories of migrant workers negotiating forces of nature to walk back home after the lockdown was declared late March, created shock waves throughout the country. Poor planning, a hasty lockdown, and lack of any contingency systems resulted in more deaths of daily wagers in those first few weeks than the coronavirus did.

While interventions from the government’s side got bungled in red tape, Indian citizens quickly mobilised emergency provisions, started distributing cooked meals, and looked for better ways to get the swathes of informal-sector workers home.

Among them were Sandeep Madarametla, Founder of cloud-kitchen company Foodstreet.in, and his angel investors, Y V Rajasekhar and Naga Prasad Tummala, who joined forces to start the #StopTheWalk campaign.

The campaign, run by the investors through the ‘People Combine Foundation’, was spearheaded by Sandeep, and included a few of his friends from IIT Madras. The group took charge of organising campaign essentials, finding volunteers, and arranging rescue transportation.

As the name suggests, the campaign aimed to stop migrant workers from walking back home by providing them with rescue and rehabilitation facilities such as food, temporary accommodations, and finally, transportation back home.

The team worked tirelessly to locate where a majority of the workers were, and where they were going so as to optimise vehicle routes. They put up hoardings in Vijayawada, Hyderabad, Vishakhapatnam, and Chennai – places where most workers had congregated – to spread awareness about their campaign, and began collecting data from those who showed up at allotted locations.

Seeing their efforts, the government decided to lend a hand and opened up marriage halls and other large spaces to provide temporary accommodation, and also helped the #StopTheWalk team obtain vehicle e-passes.

The entire operation started with a small group of people, but soon grew to over 40 volunteers.

“We were surprised to know of the many like-minded people like us who were feeling helpless towards migrant workers' problems. They all came forward and joined hands with us by spreading the word, donating, volunteering, etc.,” says Sandeep.

“People who donated told us that if their contribution helps send even one family back home, it would give them a deep sense of satisfaction.”

The teams also assembled the workers, arranged for transportation, and provided food packets and face-masks to ensure their safe return home.

“We arranged these buses according to the destination, and would initiate a bus journey once we could find enough members travelling to the same destination to occupy the seats,” says Rohit Darissa, a key campaign member.

The operation saw the involvement of other NGOs too as they had a better idea of the situation in each locality, and a more accurate estimate of how many people were still on the road.

The #StopTheWalk team tapped all sorts of sources to get funding for their operations – from celebrities, to CSR cells.

“The support for the campaign was humongous,” says Sandeep. “All our supporters were fuelling our growth as a campaign with every day that passed.”

The efforts were initially seeded with an amount of Rs 5 lakh by the investors. However, in one month, the team raised more than Rs 62 lakh through crowdfunding.

More than 900 people contributed to the campaign, along with five anonymous contributors who donated more than Rs 1 lakh each.

“We got contributions from the United States, United Kingdom, and the United Arab Emirates as well,” Sandeep says.

Pandemic Heroes: Meet the 16-year-olds who are helping children keep fit amid COVID-19

At the end of it, the team arranged around 28 buses, three minibuses, and several other vehicles such as lorries and vans for workers to about nine different states.

“The workers were so happy with our efforts that they asked one of our volunteers to contest in elections, and said that they would make him win,” says Sandeep.

The entire campaign was inspired by the story of a teenage boy who, along with a bull, had been pulling a cart with his ailing mother on it.

The entire operation ended on June 14 after most migrants reached home. The campaign plans to use the remaining funds to provide education to the underprivileged.

“We are very pleased that we got as many volunteers as we did. They are the main reason why the campaign was successful," says Sandeep. “We are also glad that we could reach out to so many people, and that all of them decided to do something about the situation at hand.”