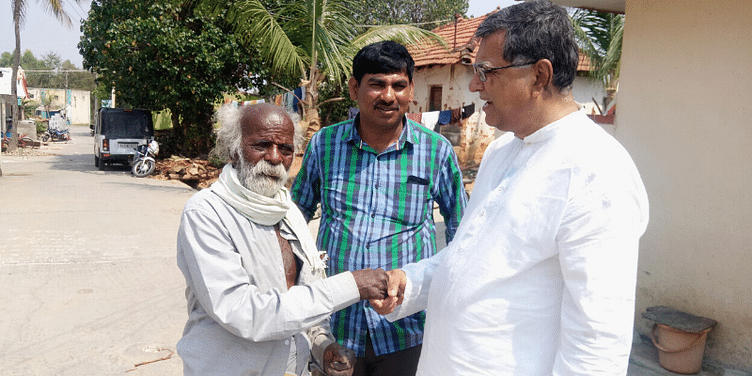 Bonded labour is a reality even today. To eradicate this exploitative practice, Dr Kiran Kamal Prasad established Jeevika Free in 1988. So far, the NGO has freed over 30,000 people from the clutches of oppression.

Located 35 kilometres from Mysuru, Vaddara Palya is a small, quaint village that is home to just more than a thousand people. Among them is 50-year-old Gopal.

Father of two children, he was barely able to make ends meet. Extreme poverty had forced him into bonded labour at a very young age. Not only was he made to work for more than 12 hours a day, but he was also subjected to social and economic abuse.

“My dad pinned me into enslavement decades ago. The condition of our family was very bad then. We could not afford even basic necessities like food and clothing. We used to pick up some edible leaves, roll them up, and eat it to satiate the hunger,” Gopal says.

Right from taking care of cattle, cleaning the house to collecting and cutting wood, Gopal used to run all kinds of errands. Just as he had started to lose all hope, he came across a few members of the Bengaluru-based NGO, Jeevika Free.

“Back in 2001, I spotted a few individuals conducting a survey. When I tried to find out more, I figured that they were there to help bonded labourers. Once I gave them some basic details through an application, they got me released and ensured my rehabilitation through a scheme sponsored by the government. For the last few years, I have been breathing the air of freedom by running a petty shop of my own,” recalls Gopal.

Founded by Dr Kiran Kamal Prasad in 1988, Jeevika Free is focused on identifying, freeing, and rehabilitating bonded labourers and other forms of institutional slaves. So far, the organisation has freed over 30,000 people from the clutches of oppression.

“Though bonded labour was officially abolished in India in the 1970s, it continues to exist even now. Since most of these workers are either Dalits and Moolnivasis, they struggle from caste-based injustice, besides being trapped in a vicious cycle of poverty. I wanted to provide respite to them. Jeevika Free was born out of the mere will to fight bonded labour through education, advocacy and community organisation,” Kiran Kamal Prasad, Founder and Coordinator, Jeevika Free tells SocialStory.

Born and brought up in the Udupi district of Karnataka, Kiran Prasad studied Social Anthropology at Karnataka University and then went on to pursue his PhD from Kannada University in Hampi.

During the course of his study between 1983 and 1987, Kiran visited multiple rural areas in and around Anekal. It was there that he witnessed the inequitable treatment meted out to certain sections, especially Dalits.

“Many restrictions were placed on Dalits in the villages I visited. They were not allowed to move around in public places, nor given access to water or firewood. Eventually, I realised that the prejudice was not only based on caste but also, on occupation,” recalls Kiran.

Kiran wanted to understand the dynamics. On further inquiry, he found out that the roots of it stemmed from bonded labour, where the services of people were pledged to lenders until the repayment of their debt or borrowing. He found limited access to justice, education, and employment to be some of the factors that made it tough for the workers to break away from the cycle.

He wanted to help people escape the exploitative system of debt bondage. Hence, for almost two years, he took time out to travel from one village to another to understand the scale of the problem.

“I went to more than 300 villages and spoke to hundreds of labourers. I conducted some simple surveys based on my interactions with them. And, at the end of it, I had identified 700 odd workers who were being exploited in the name of debt bondage. That was when I took a firm stance to sow the seeds for Jeevika Free,” notes Kiran.

After the Bonded Labour System (Abolition) Act came into force in 1976, several steps were taken by the government to rescue and rehabilitate people entrapped in the system. Another landmark move came in 2013 when the Criminal Law (Amendment) Act introduced sections 370 and 370A into the Indian Penal Code (IPC), which criminalised anyone involved in the recruitment, transfer, transport, or harbouring of a person for the purpose forced labour, prostitution or organ removal. The punishment for the above acts includes imprisonment of up to 10 years.

To begin with, Kiran extended his effort to identify bonded labourers. He knew that getting workers to open up about their toil and the ill-practices attached to it was not going to be a cakewalk. Therefore, this time, he took the assistance of a few locals from various villages in Karnataka.

“I trained a bunch of individuals from Dalit and Moolnivasi communities as well as people from the families of bonded labourers themselves, based on my previous interactions with them. They paid visits to over 176 tehsils to gather more information about bonded labourers in the fields of agriculture and other unorganised sectors. By 1995, we had identified a staggering 18,000 bonded labourers and this number only increased over the years,” says Kiran.

The team of Jeevika Free then took up the responsibility to organise awareness sessions, plays, and cultural events for these labourers to enable them to exercise their legal rights and also access the benefits promised under them. Besides this, officials at the district, sub-district, and taluk level were also sensitised to aid the affected.

After making the workers cognizant of the injustice meted out to them, the NGO sets up camps for them to fill out applications for their rescue, rehabilitation, and entitlement. This, in turn, is routed through the government to secure benefits for all of them – right from procurement of ration cards, provision of medical support, to financial assistance in the form of rehabilitation fees.

“Between 2010 to 2018, the organisation has helped with the release 3,167 bonded labourers, out of whom 2,655 have even received rehabilitation packages. And, around 15,000 of them are expected to be released in the next few years We have covered a slew of districts like Kolar, Tumkur, Chikkaballapur, Ramnagar, Mandya, Yadgir, etc,” adds Kiran.

Jeevika Free’s endeavour is supported by Freedom For All, an international organisation working to abolish slavery in different countries. It is also collaborating with institutes like the National Law University in Delhi (NLUD), the National Law School of India University (NLSIU) in Bengaluru to study and document the practices of modern slavery as well as the legal provisions associated with it.

“We are going to continue working towards conducting more surveys across all informal sectors. In addition to that, efforts are being put in to bring about changes in government policies both at the state and national levels for the reportage and rescue of workers. The goal is to dismantle and destroy bonded labour not just in Karnataka, but across India,” Kiran says.