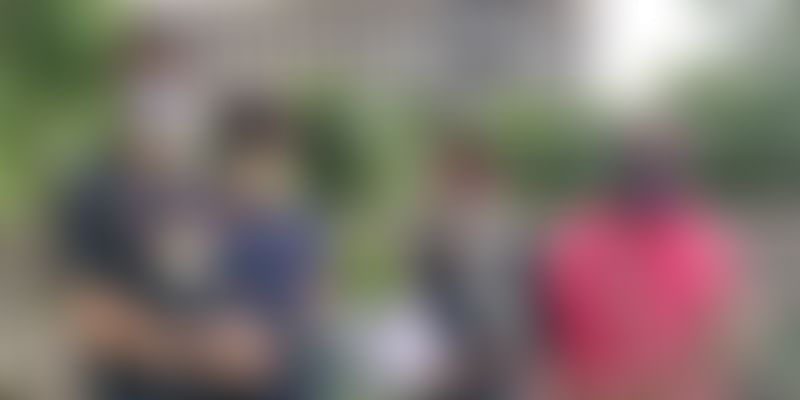 During the COVID-19 pandemic, Support our Students initiative has been involved in distributing laptops and tablets to the underprivileged students to help with their online education.

The COVID-19 pandemic caused immense collateral damage to society. When the government first declared a nationwide lockdown in March, it was the schoolchildren who suffered the most.

While some children resorted to their laptops and desktops to attend online classes offered by their schools or various edtech startups, many Indian households could not even afford a smartphone to help their children.

In hopes of helping such students, Asha Kapur, Gitanjali Gupta, and her son Dev, Sarah Kurien, and Tanya Bali, started Support our Students — an initiative that provides old, refurbished laptops, desktops, and tablets to underprivileged children.

“What we aim to do is connect needy students who need technology for their education, and connect them to people who want to help them,” Asha Kapur tells SocialStory.

The volunteers at the Bengaluru-based organisation collect old laptops and desktops from people who want to help. They then refurbish them and provide them to the underprivileged students, who usually wait for their parents to return home to use their smartphones for their classes.

Initially, the organisation was distributing masks among people. However, after witnessing the importance of technology in the times of pandemic and its urgent need in education, the founders decided to pivot towards helping students with online learning.

“I saw that my grandson constantly needs to use the laptop for his online classes. At the same time, a young tailor that we knew, had a son in Class 12, who was struggling to cope with his online classes in a village in north Karnataka. That’s when we realised the importance of technology in this time to all students, despite their backgrounds,” Asha says.

One of the members and an educational counsellor, Sarah, knew of children who needed help to keep up with their education. Meanwhile, the team also identified nearby low-income families that had faced the brunt of the pandemic.

“A nearby house help, who worked in about eight homes, was a single parent who was educating her daughter by herself. With the lockdown, she faced trouble in attending the online classes,” Asha shares.

The plight of these underprivileged children and families pushed the team to help them with the technological requirements. It provided refurbished laptops and desktops to the children who needed them the most.

“Bengaluru being an IT city, is a great place to find old and not-in-use laptops. So, to start, we called our friends and families and asked them if they had any. While they did have old laptops, they weren’t in a position to refurbish it. So, we pitched in to aid that step,” Asha says.

The team made a list of 10 students, to begin with, who were severely impacted by the lockdown. They didn’t target just the brightest students, but those who were upset about the situation.

Upon hearing about the initiative, a gentleman got in touch with his friends and schoolmates, who were ready to sponsor the tablets.

With five tablets from the said gentleman and five from the team’s own pockets, the first 10 tablets were given on the third day after the initiative was launched. In fact, the product dealers did not take a commission on these devices after understanding who was benefitting from the sales.

This Mumbai couple waived off their school fees, used personal savings to feed poor amidst pandemic

“Now, we are requesting the sponsor of the Lenovo tablets to directly transfer the products to the distributor’s account for total clarity. We then Dunzo the laptop from the distributor. In the case of old laptops and computers, they are directly sending them to my place,” says Gitanjali.

Support our Students initiative distributes 7” Lenovo tablet with a 3G sim option. It costs about Rs 5,750, thanks to the discount provided by the dealers.

“Recently, through a social worker at St. John’s Hospital, we identified student patients whose parents can barely afford the treatment, and are getting subsidised treatment at the hospital. Through the social worker, we’ve been giving laptops to help these children as well,” says Asha.

Narrating another story, Gitanjali says that she had received a call from a friend whose company was getting shut, and nine desktops were up for donation. Simultaneously, a doctor called to inform that one of his patient Girish Kumar, who is visually challenged, has two daughters studying in Class 10, and required a system. The connection was almost instant, and they could help them take the desktop home.

“Many people have said that they couldn’t have thought of this idea, and thanked us for giving them an opportunity to reach out during such hard times,” Asha adds.

The initiative has done well, and the students who benefitted from it stand testimonial to it. One of the first few girls to get a laptop, Prerana, bagged the 10th position in Karnataka in her PUC board exam.

Many students also wrote Thank You cards, sharing how grateful they were to receive laptops. According to the team, this was one of the most gratifying experience for them.

Moving forward, the team is looking to gather laptops for 40 odd students who are in dire need of it. “We plan to help more students as and when we identify the needs,” Asha concludes.