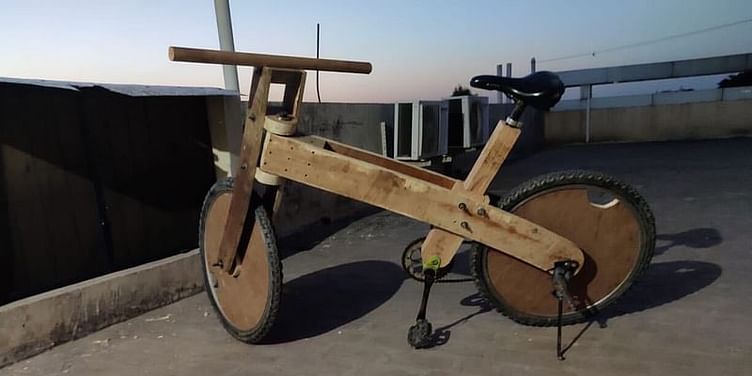 To overcome the lockdown blues, Punjab-based carpenter Dhani Ram Saggu is making wooden cycles. He is now getting orders from Canada and South Africa.

Punjab resident Dhani Ram Saggu was one among many who were rendered jobless during the nationwide lockdown. Hailing from Zirkapur, Dhani Ram decided to put his creativity and talent to make an eco-friendly innovation. The 40-year-old carpenter took some plywoods and turned them into a bicycle.

“With construction put to a full halt, and with no means of livelihood, I wanted to keep myself occupied, learn new skills, and build something different. But, my creativity was constrained to the raw materials available at home – plywood, tools, and old cycles,” Dhani Ram told The Better India.

Having spent a significant time around handymen, Dhani Ram didn’t find it hard to understand the mechanics of the bicycle and how its parts work.

“I spend a lot of time around cycle shops. Though I have never made a cycle before, I have seen my friends take apart an entire cycle and put it back together using the same parts or with some modifications,” he said.

After sketching out a feasible design model, the carpenter took some plywoods to create the body of the bicycle, along with the handlebar and rims. He used the chain, pedals, wheels, seat, and the side stand of an old cycle and attached it to the wooden body. It took him about a month to finish the initial prototype.

Following this, during his second attempt, he used a special wood called Canadian wood for the body. The wood is known to be light, inexpensive, and strong. The new cycle further had regular tyres, a mudguard, a re-designed handlebar, and a basket in front.

“The cycle weighs between 20 and 22kgs, but I am working on making it lighter. I now use disc brakes rather than the rim brakes and am working towards putting in gears as well. I am also designing a cycle for children,” he told the Hindustan Times.

These wooden cycles are sold for Rs 15,000 apiece under the brand Noora Interiors, which Dhani Ram also uses to sell his woodwork for home. These cycles can cover up to 25 kilometres a day, but most people are more excited about their uniqueness.

Dhani Ram has been getting plenty of orders from South Africa, Canada, Jalandhar, and Delhi. It has sold eight cycles between July 27 and August 30, and five more are in the works.

Meet the world's first blind trader; a man with no sight, but a lot of vision

What needs to be done to improve India's public education system?