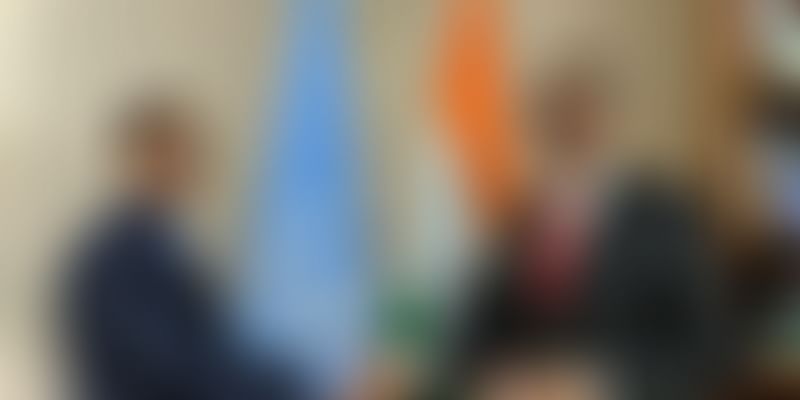 The World Food Programme thanked Pranav Khaitan and recognised his leadership in pioneering the development of artificial intelligence to revolutionise humanitarian operations.

According to the World Food Programme (WFP), one out of nine people still do not receive adequate food to eat. This is why food and related assistance are at the heart of breaking the poverty cycle.

WFP aims to bring down world hunger, achieve food security, and improve nutrition by 2030. In fact, it assisted 97 million people across the world in this respect in 2019.

So, ‘for its efforts to combat hunger, for its contribution to bettering conditions for peace in conflict-affected areas and for acting as a driving force in efforts to prevent the use of hunger as a weapon of war and conflict’, WFP was awarded the Nobel Peace Prize in 2020.

Hearing the news, the town of Rourkela, India rejoiced because it was home to Pranav Khaitan. The Engineering Lead at Google USA and IT Rourkela alumnus from Odisha played a prominent role as WFP’s Advisory Council Member and Artificial Intelligence technology leader.

In fact, immediately after winning the Nobel Peace Prize, the World Food Programme thanked Pranav and recognised his leadership in pioneering the development of artificial intelligence to revolutionise humanitarian operations.

The partnership between Google and WFP started about two years ago when Pranav partnered with them to address “How can AI help reduce global hunger?”. He then led his team to build AI technologies to assess the disaster damage within the crucial 24 to 72 hours, and to make the delivery of the aid timely and efficient, which otherwise takes weeks or months.

SocialStory caught up with Pranav Khaitan to understand the technology behind the Nobel Prize victory and how it can truly achieve the UN’s ‘Zero Hunger’ goal.

SocialStory (SS): When did you realise you were inclined towards the social space?

Pranav Khaitan (PK): I started off as a software engineer early in my career and am now a Senior Engineering Lead at Google, working on Artificial Intelligence. I have been working in this space for about six to seven years

I started observing that the economic disparity was growing wider despite the development of new technology, and I wanted to help bridge that gap.

SS: What was your role in WFP’s project?

PK: About three years ago, I realised that there is a lot of potential for technology to help several sections of our society who need it. And it was time for me to put this technology to good use.

I reached out to the United Nations World Food Programme, which is helping lift so many people out of hunger. They were more than excited to partner with us. That led to us establishing a partnership between Google and the World Food Programme to figure out how we could use artificial intelligence to help eradicate world hunger.

SS: How does technology help identify the crises?

PK: Natural disasters, such as earthquakes, hurricanes, and floods affect large areas and millions of people, but responding to such disasters and supplying food to them has been a massive logistical challenge.

To help ensure timely delivery of aid to the affected people, we developed an AI-based technology that could assess disaster damage within 24 to 72 hours, compared to the more than two weeks that manual analyses used to take earlier.

This technology would help crisis responders, including governments, NGOs, and UN organisations, get fast access to comprehensive and accurate assessments in the aftermath of disasters so that they can efficiently allocate limited resources. Providing food and other aid in a timely manner would help save many lives in the disaster-affected regions.

SS: How do you assess the aid required for each country?

PK: Whenever a country is affected by any disasters, we need to get in touch with the global decision-makers, humanitarian leaders, and country leaders to decide where and how much aid is to be sent.

In the beginning, there is little-to-no information available to them. So, this technology helps them access these regions and gives information about what aid is needed in each region. In other words, it assesses the need and communicates that need to the leaders.

SS: What are some of the other projects you have been a part of?

PK: Around the same time, we had partnered with the World Bank, another UN organisation that is helping people out of poverty. This project called ‘Famine Action Mechanism’ (FAM) was aimed at using AI/ML to predict famines and trigger the rapid release of financing to prevent them.

When famines hit a region, the help comes in due course of time. By the time they receive the aid, a lot of damage would’ve already been caused. So, we wanted to assess when a particular region would be hit by famine, and preferably much before time. Even if we can now cast it as opposed to forecasting, it can still make a difference.

SS: Can you share some of the challenges that you faced during this project?

PK: One major challenge is that AI is a relatively new field and the humanitarian aid is one of the areas that hasn’t benefitted from AI as such. So, bringing the two together was quite difficult, as computer science engineers do not understand humanitarian aid well and vice versa.

Getting the best of both worlds requires a lot of educating and forming new practices. This is crucial since the evaluation measures require a lot more accuracy, ensuring that we can meet the requirements and comply with the necessitated standards.

SS: What are your plans for the road ahead?

PK: At large, we are still at the tip of the iceberg. We plan to scale the programme to more disasters across the world. While we have implemented it in on earthquakes and other conflict scenarios, but it can be extended to floods, cyclones, and other disasters.

When can I get the COVID-19 vaccine