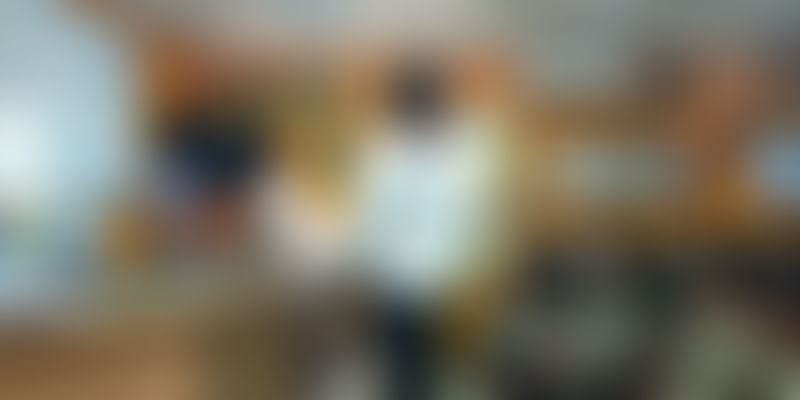 In 25 years of his educational career, Yakub S Koyyur has been learning as much as teaching. He developed a unique Maths Lab in a government school in Dakshina Kannada district, and now dreams of transforming the education system to make it more wholesome.

The very sound of mathematics can make students run a mile. No wonder then that many edtech firms are trying hard to find ingenious ways to impart a love for numbers. While children in urban areas have the benefit of various digital platforms, what about those in government schools in hinterland India, where internet is sparse, and exposure so little?

Enter motivated teachers like Yakub S Koyyur, whose idea and development of the Maths Lab, set up in a humble government school at Nada, Belthangady taluk, in Dakshina Kannada district, Karnataka, has won accolades from near and far.

“I had big dreams and aspirations of doing something different to help my students, and inspire others to do the same. I spent many days and weeks pondering about what I could possibly do,” Yakub says.

Born in Koyyur village in Dakshin Kannada district of Karnataka, Yakub was the only one who could pursue high school among all his siblings - comprising his two sisters and five brothers.

After completing his BSc from SDM College in the district, Yakub decided to teach children at the local Government High School for about two years. This sparked his love for teaching, and it led him to complete his Bachelor’s in Education from Mangalore University with a second rank!

“I was sure I wanted to be a teacher. I truly believe the position they hold is very important in a child’s life. In fact, some of my teachers are the biggest inspiration for this. Moreover, with me being unable to pursue anything else, I learnt this was what my destiny had in store for me,” Yakub shares with SocialStory.

Yakub began his official teaching career in 1996 at the Government High School in Nada village of the same district. To date, he has taught over 4000 students, developing specialised content for below-average students and even training new teachers. The specialised content can now be accessed on his personal blog.

Why Farida Rizwan believes every child deserves an inclusive education

So how did Yakub think of setting up a Maths Lab? He shares that in 2012, he realised he wanted to do something different and unique, and make a difference to the current education system.

One night, he dreamt of a room in the school with a board hanging outside that read, 'Maths Lab'. As he walked in, he saw the walls were full of interesting and inspirational quotes. Colourful numbers were painted across the walls, creating an all-in-all dreamy experience for this Mathematics teacher.

The very next day, he shared his thoughts with his colleagues and students. While they all appreciated the thought, they weren’t ready to pitch in.

“I took to Facebook and WhatsApp and created groups where I connected with my former students and shared the idea with them. I also mentioned the major financial constraints since it was a government school,” says Yakub.

Within a day, Yakub saw that support was pouring in. A total of Rs 3.5 lakh was collected to begin with, with old students transferring various amounts from all over. With moral support from his family and monetary support from his loyal old students and other well-wishers, Yakub was able to build the Maths Lab in an unused room in the school. He named it ‘Maths World’.

The lab has a 52-inch SmartTV screen, which showcases Yakub’s YouTube channel ‘Maths Magic.’ The channel has videos on over 400 math-related topics. A smartboard has been created by a company called EyeRIS, which helps students learn and practice maths easily.

“The students take their math period in the lab. They can either explore it themselves or take help from a teacher. They can touch and feel the math models and get an understanding of the concepts, which is clearly better than the traditional ‘chalk and board’ method,” Yakub says.

“In fact, students even skip their PE period to visit the lab because of their curiosity and interest,” laughs Yakub.

The Programming Foundation is on a mission to make technology inclusive

Not an easy feat

Yakub shares that building the lab had its fair share of challenges. As the concept for the Maths Lab was new to him and everybody around him, they had no reference point while building it.

However, visits from eminent personalities like Shalini Rajneesh, Principal Secretary of the Primary and Secondary Education Department, Government of Karnataka, helped in getting more attention to the project.

“For all my efforts, the society recognised me in this way. So, I am the best example to say ‘what goes around, comes around’,” says Yakub.

Yakub is looking to develop his school in Nada in a wholesome way. He wants to make it greener and more educational in the coming years. The school has a one-acre plot right next to it, where they are growing herbal plants as well as vegetables. Due to the pandemic though, the garden had not been receiving full attention. They are now trying to revive it.

Yakub also wants to make the school premises greener. His other plans include building a state-of-the-art library on campus, and creating labs for other subjects to pique children’s interest. Learning from Yakub, one of his colleagues constructed a smart class for his students with an investment of Rs 5 lakh.

“But what is most important to me is to mould my students in such a way that they learn to give back to the society. That will make a big difference,” Yakub signs off.

What is intersectionality and why you need to know about it