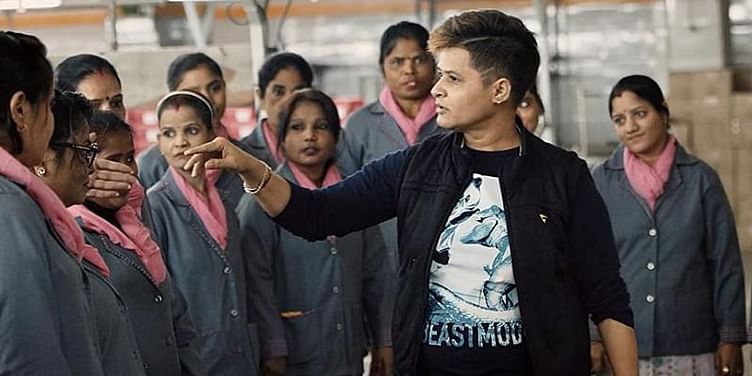 Motivational speaker and international karate champion Aparna Rajawat and entrepreneur Mansi Chandra are on a mission to empower women and ensure their safety with the Pink Belt.

Aparna Rajawat’s earliest memories of growing up in a conservative Rajput family in Agra were how differently she and her three sisters were treated as compared to their two brothers. The same attitude was also reflected in school. She recalls an incident in primary school where the boys would not allow the girls to get on the rides.

“I was determined to get on the rides. I was physically strong as I had learned to defend myself against my brothers, who were bullies. When the other girls saw me standing up to the boys, they also tried to come on to the rides,” Aparna says.

However, when the boys physically pushed the girls away, Aparna was the only one who had to come to everyone’s defence. That was the first time she realised how important it was for girls to be able to defend themselves and not have to depend on someone else.

That single thought inspired her to learn karate and she went on to win medals at the national and international level. However, an injury in a road accident ended her career in competitive sports.

Aparna, who holds a master’s degree in English literature and business management, then moved to London, where she worked as a tour manager.

She says watching the way women moved around confidently in society was an eye-opener and a far cry from what she had seen growing up. In December 2012, the rape of Delhi student Jyoti Singh – the Nirbhaya case– was a huge wake-up call for Aparna.

“I started following the case, and in my research realised how many women and young girls are violated in our country each day. A survey by the Thomson Reuters Foundation in 2014 found that India was the most dangerous country to be a woman. The number of rapes, gangrapes, and acid attacks were staggering. And these numbers represented the 20 percent that were reported. Over 80 percent were not even reported. I decided I needed to do something,” she says.

She returned to India in 2016 to start the Pink Belt Mission.

Explaining why she chose this name, Aparna says, “Traditionally, pink is a colour associated with girls and women. For me, the karate belt has always been a symbol of power. Pink Belt therefore symbolises powerful women.”

She says most women in India are repeatedly told that they are weak and less worthy than men. “If you were to give these women a loaded gun, they would still be hesitant to use it.

"I spoke to many women in India and outside and realised there are five dimensions in which a woman should be empowered – legal, mental, physical, emotional, and digital. How can women be safe if they don’t even know their legal rights?”

Aparna adds that with girls as young as 11 years being given mobile phones, staying safe online is crucial. Today, Aparna has worked with 1.5 lakh girls across 12 states, trained over 2,000 people to conduct self-defence sessions for students, and participated in thousands of workshops.

She has also curated a special programme to sensitise boys and young men about the importance of respecting women as equals and is open to working with educational institutes to execute this programme.

On February 19, 2020, Aparna returned to her hometown, Agra, to organise the world’s biggest self-defence session. Over 7,501 girls accurately performed a martial arts routine (12,000 had gathered for the event) at Eklavya Stadium under Aparna’s guidance for 35 minutes, which earned them a place in the Guinness Book of World Records. She has also been featured in a Hollywood documentary about her life and work.

Safety for all women

But Aparna’s vision is greater than certificates and symbolic achievements.

And that is how she and business partner Mansi Chandra designed a device that would help women and girls, and save them from acid attacks and assault.

Mansi recalls her first meeting with Aparna, saying that she was reluctant to engage with her and assumed that she was only interested in funding for her mission. After attending a few of Aparna’s sessions at girls’ colleges, she was in awe of the response the former was getting from students and decided that she wanted to work with her.

The Pink Belt is a GPS-enabled device that alerts the police about a girl’s location. “Very often the girl does not have time to reach her phone. And even if she does use the phone, it can take the service provider 10 minutes to find her location. This is instant,” Mansi says. The device also automatically sends a signal if it’s forcibly removed from the wrist.

“The wrist is the easiest place to reach when you are in danger. It makes all the difference to a girl being saved from being raped or her eyesight being saved in case of an acid attack, with timely help,” she adds.

While the belt has been designed, Aparna and Mansi are keen to generate interest in the belt and create enough of a demand so that the right people will take notice and make it a reality. There are also plans to expand its use for anyone in an emergency situation, especially old people who are living alone.

“We need people to sign our #Iwantmypinkbelt petition. We have a fool-proof concept that we have worked hard with a company to develop. Once we get that kind of interest, we can raise funds to develop the belt. We want to be able to distribute these free in villages and rural areas where they are needed. We are blessed as a generation to be able to have such access to technology and we need to use that for good,” Mansi says.

When asked what making Pink Belt a reality means to her, Aparna gets emotional.

“I have visited villages where I have seen girls as young as six years old victimised by their own family members. I feel so helpless. If I can save one or two girls’ lives, then I feel my life would be worth it,” she says.

“We have spent nine months developing this device so that we have a powerful voice and save many girls. And it’s not just me...it’s we who have to do this.”

You can sign the #Iwantmypinkbelt petition here. The petition is not just for women or people in India to sign, but open to anyone who believes that safety is the right of every individual.

Watch the trailer for the documentary on Aparna here

Back to Skills – These startups lend a helping hand, skill youth for employment