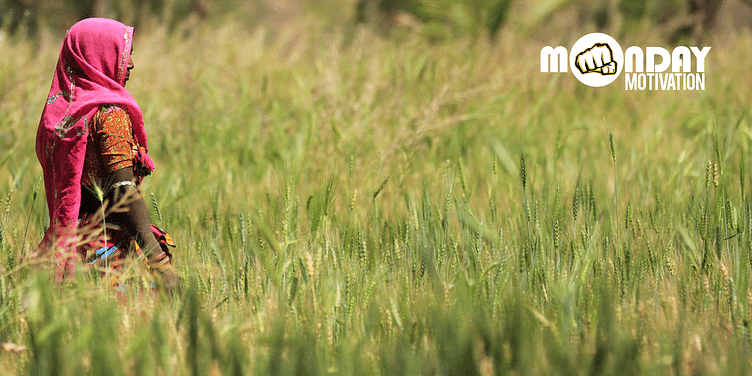 From struggling to feed her family of eight, Laxmiben Dabhi now has a successful harvest through the year and is training other farmers in her district with new agricultural techniques.

The village of Kharakdi in Gujarat’s Bhavnagar district is like many others in India. According to the 2011 census, there were 330 households in the village and the majority of residents are smallholdings farmers who depend on their harvest and on agricultural labour to make ends meet. Among them is Laxmiben Dabhi, who comes from a family of farmers.

Now in her early 50s, she lives in a joint family of eight that owns five bighas (three acres) of land. Despite owning land, the produce was seasonal and there was not enough money to feed her family. “I decided to look for jobs outside farming. I worked as a casual labourer and as a diamond polisher for six months at a stretch, just so we would have enough,” Laxmiben says.

For the remaining year, she would work in the fields.  But her heart was in agriculture and she wanted a way to cultivate the land through the year. “I decided to take vegetable farming more seriously and create an independent livelihood. I started simple with green chillies, eggplant, bottle gourd, ladies’ finger etc. But, since we are only an hour away from the coastline, the incessant rains would often impact our crop,” she says.

In April 2018, Laxmiben heard that a meeting was being organised in her village where people were being counselled on how to improve their livelihood. The meeting was being held by Utthan, an NGO that works in areas across women empowerment, poverty, and livelihood and sustainable practices.

“I was especially keen to attend their session on using innovative methods and new techniques that would increase my agricultural output. I decided to immediately volunteer as a demo partner.” She volunteered as a demo partner and implemented the demo in 0.25 “bigha” of her land. The implementation was a success and Laxmiben began to use her learnings from the training while farming.

“In August 2019, I decided to attend another related training (also organised by Utthan), that focussed on bottle-gourd cultivation through double-layered vegetation. Using this technique I was able to grow different vegetables in a tiered structure in my field at the same time. Because of this protective layer, none of my crops were damaged during the monsoon in August,” she says, saying that the bottle gourds remained safe as they were on a higher level.

Her harvest exceeded 70 kg and she was harvesting bottle gourds every three days. “At the market rate of Rs 10-12/Kg, I made Rs 15,000 in just two months, which was ahead of other farmers who did not use this method,” she says.

“My bottle gourd crop was planted in the soil earlier and the creepers would be damaged by the flowing water when it rained. The year I started using the double-layer technique, we had unseasonal rains in October 2019. A lot of farmers faced devastating losses. But, my crop was safe,” she says. Laxmiben was also able to return a Rs 6,000 loan that Utthan gave her to set up her farming practice in a single season.

Today, her entire family is able to live off the earnings from the land. Laxmiben is also working with other farmers in the area to train them and help improve their livelihoods.