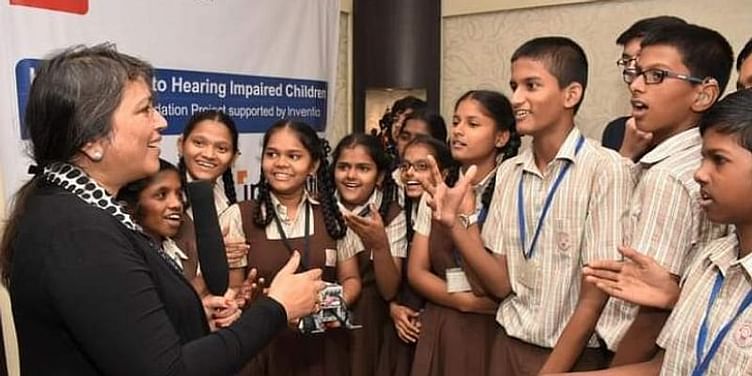 Mumbai-based Josh Foundation is providing hearing aids and cochlear implants for children with hearing impairment at an early stage of their life.

According to the World Health Organisation, about 6.3 percent of India’s population, i.e., about 63 million people suffer from hearing impairment. But audiologist and speech therapist Devangi Dalal believes this number can come down if we create more awareness.

In her 30+ years of experience, Devangi shares that she has never come across a single child whose hearing loss cannot be treated. She says that they may have at least 5-10 percent hearing, based on which they can be supported with hearing aids.

To cure hearing impairment in children and bring in inclusion at a large scale, Devangi Dalal and Dr Jayant Gandhi, an ENT surgeon, started Josh Foundation in 2014. The Mumbai-based organisation supports and assists children who have hearing problems.

“Children with an impairment can hear like normal people if we give them hearing aids or cochlear implant within six months or a year,” Devangi tells SocialStory.

“If we detect it at an earlier stage through neonatal screening, and if you give a hearing aid or cochlear implants based on their requirement, they can learn the spoken language like normal people and can be directly integrated into the normal schools,” she adds.

So far, the foundation has distributed about 1,300+ hearing aids. During the pandemic, Devangi helped about 100 children with hearing aids since October 2020.

Activities of the foundation

The hearing aids that will benefit these children in the long term can cost about Rs 60,000. But underprivileged children cannot afford this. So, the Josh Foundation procures funds from corporate and philanthropic donors and provides hearing aids as per the requirement of the child. The projects so far have been done in 12 associated special schools, where all the children have received hearing aids.

“An organisation came forward and said that it had a hearing aid that costs about Rs 2,000. But just to save on costs, I don’t want to give little hope to these children with something that doesn’t last very long, especially when we are trying to normalise their hearing at a young age,” says Devangi.

The hearing aids procured by Josh come with two years warranty, and if used systematically, can work for up to seven years. During these years, the child can start speaking and the hearing loss will almost be non-existent. Only hearing aids of good quality can help achieve almost near-normal hearing, she says.

The foundation also conducts special events for these children like a talent competition, where children from special and regular schools come together on the same forum. This encourages them and makes them feel more inclusive in the long run.

It has also introduced a sports education programme in four to five special schools, after which more children started coming to the school.

“With sports, they were getting a lot of confidence, they were becoming more energetic, their food intake increased, and they started enjoying going to school,” says Devangi, adding that it paused during the pandemic.

From diagnostics to rehabilitation -- at every step of the way, Josh Foundation is helping children with hearing impairment, she says.

There are about 12 special schools associated with Josh. While Devangi and Jayant do the fitting, testing, and creation of the moulds, the other members - the parents, teachers, and principals – are taught how to take care of the hearing aid.

Depending upon the amount of hearing and the requirement, the team orders the hearing aid and raises funds for the same. Once it is delivered, Devangi and the team make proper moulds for the children and set the hearing accordingly.

“Once we fit the hearing aid, the child can hear almost 80-85 percent. Then we train the teachers and caregivers on how to talk to the child, because any child who is born normal also takes about one year to have normal speech. We then track the progress every three to six months,” says Devangi.

Back when they began, the duo procured the best technology hearing aids at a discounted rate. Devangi shares that many people who used the hearing aid are now engineers, sports managers, interior designers, and chattered accountants.

“Working with specially-abled children, I'm getting inspired every day. I want to create more awareness and help more children…you know, in the society, wherever there is a need, show them the right path,” she says.

Bumps on the road

The biggest challenge was getting the funding because people were often sceptical about the costs. However, after working with a few children and establishing the results, they were able to give them all the reasons to provide these hearing aids to the children.

The second challenge was that only special schools and the teachers had to deal with gestural language or sign language. So, they did not know how to communicate with these children after wearing the hearing aids.

“After six months, they felt the task was much easier, and they now enjoy teaching them,” Devangi shares.

Speaking about the road ahead, Devangi says she wants to create awareness at the national level to start the paediatric protocols to make neonatal screening in the country compulsory and give the best technology to all the children with hearing impairment.

This mechanic is making agricultural equipment out of motorcycles

These youth-led startups are transforming India, one innovation at a time