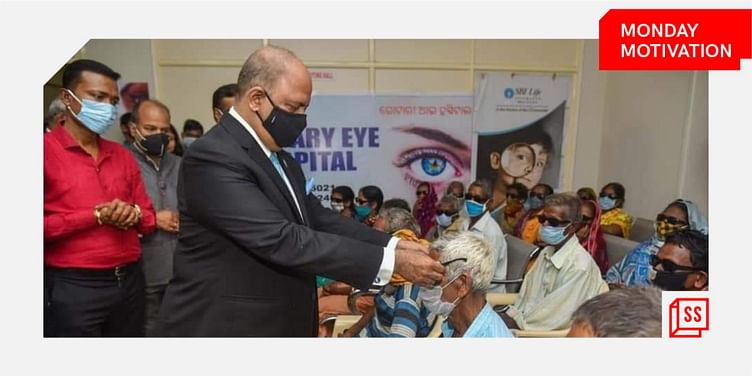 A Rotary member since 1984, Shekhar Mehta has pioneered various initiatives to help different communities across India and outside.

Born in Jaipur and raised in Kolkata, Shekhar Mehta comes from a family of chartered accountants, with 32 members having pursued CA – including himself. However, his career took a different path when he joined Rotary in 1984.

“Rotary kindled the spark within me to look beyond myself and embrace humanity. My inspiration comes from Rotary’s motto, “service above self”. Service became a way of life for me, and I, like many others, adopted the guiding philosophy that service is the rent I pay for the space I occupy on this earth, and I want to be a good tenant of this earth,” Shekhar tells SocialStory.

[Monday Motivation] This corporate professional has dedicated his life for selfless deeds, volunteering with over 60 social groups

Participating in service projects through Rotary changed Shekhar as a person and made him empathise more with the needs of others. Soon after joining the club, he started working on various projects that benefited rural communities locally.

“One can make a greater impact only by practising ‘service above self’. We, as a community, can uphold our humanitarian duties only when we serve to change the lives of those around us. Make others capable regardless of status, cast or creed,” explains Shekhar.

His contribution towards health work began with the Rotary Club, Mahanagar in Kolkata. There, among other things, he helped pioneer a programme called Saving Little Hearts that, over the years, has provided more than 2,500 free heart surgeries for children from India, Pakistan, Bangladesh, Nepal, and Africa. Before the programme went international, it started locally to perform just six surgeries within our community.

In addition to this, under his leadership, Rotary, together with the Research Society for the Study of Diabetes in India, hosted a nationwide blood glucose testing camp on 29 September (World Heart Day). The camp was spread across more than 10,000 sites in India, with more than 2,000 Rotary and Rotaract clubs participating in the effort. More than one million blood-sugar tests were conducted in a day, an accomplishment recognised by the Asia Book of Records.

Apart from his goals in India, Shekhar is making overseas trips to developing countries like Nigeria and Uganda to inspect a slew of projects sponsored by RI for the education of girl children from low-income households. He also signed a collaboration agreement with the government of Uganda for RI’s India chapter to construct an eye hospital, and provide free-of-charge heart surgeries for 100 Ugandan children in India.

Under his leadership, various environment-friendly initiatives are being implemented by Rotary clubs the world over, including the installation of solar panels, recycling, and encouraging tree plantation in communities.

In 2004, the Indian Ocean Tsunami devastated the Andaman and Nicobar Islands – destroying thousands of homes and leaving many areas without electricity and running water. When Shekhar visited Little Andaman Island, the builder in him immediately wanted to build homes for the homeless islanders. He decided to construct 500 homes on Little Andaman.

“Some of the poor conditions I saw in those communities strengthened my commitment to service. I truly understood the plight of my brethren. Some of the most life-changing experiences have been where I was able to assist a family with heart surgery for their child with a congenital heart disorder, or when I was actively involved in the on-ground rehabilitation efforts for those displaced in Andaman and Nicobar Islands after the 2004 Tsunami,” he says.

At the United Nations Climate Change Conference in Glasgow in November, Rotary International President, Shekhar Mehta, declared that mangrove restoration will become one of the key threads of Rotary’s environmental focus. The Rotary President pinpointed needs in India, Pakistan, Bangladesh, Sri Lanka, the Maldives, Seychelles, Kenya, and Tanzania for Rotary programmes of mangrove planting and education.

Humanity First: How this non-profit is helping 30,000 families cope in the pandemic

According to Shekhar, the main focus of Rotary under his tenure would be on empowering girl children globally by providing them access to education and resources.

“Girls and women worldwide face inequities in areas including health and education and experience significant violence and disproportionate poverty. We want to encourage clubs and districts to prioritise projects that improve the health, well-being, education, and economic security of girls in their communities and around the world,” he adds.

As part of the efforts, Shekhar conceptualised a nationwide literacy programme – TEACH – reaching out to more than 50,000 schools and 15 million children with the help of central and state governments.

This year, he laid a strong emphasis on projects that empower girls through access to education and the path to employment. In rural areas, the major challenges to achieving this are lack of water and sanitation infrastructure. To facilitate girl education, RI has helmed projects in India, focusing on providing girls and women with affordable, reusable sanitary pads. This, in turn, will generate employment from the production and distribution of the pads, and will reduce the pollution caused by the disposal of 12.3 billion sanitary napkins in the country annually, many of which end up in India’s landfills. Other projects have used vocational service to advance the empowerment of women.

The Rotary Club of Poona, India, conducted workshops to teach martial arts to young women for self-defence against the threat of abuse or human trafficking.