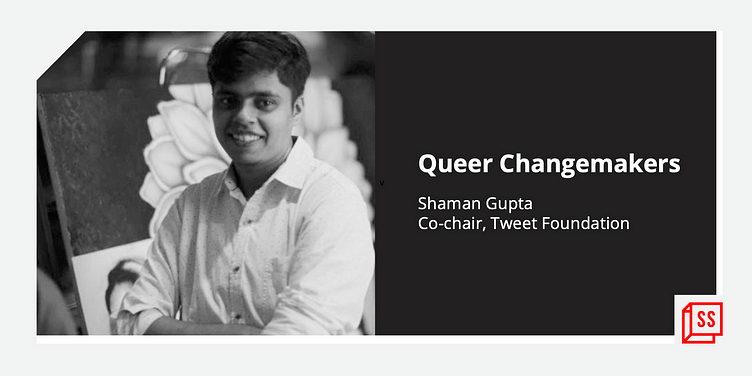 Co-founded by seven trans activists in 2017, Tweet Foundation has worked over the last five years with the transgender community in India.

Transmen face extreme gender-based violence and have been 'invisibilised' in society, and unfortunately also within the broader community of gender and sexual minorities. The issue for economically deprived trans folk is further compounded due to the lack of comprehensive policy frameworks that protect trans persons and help the community access basic healthcare, legal rights, education, and gainful employment.

Transgender Welfare Equity and Empowerment Trust (TWEET) is one of the leading organisations in the country that is addressing these issues by bringing together activists and social workers who identify as transwomen, transmen, and trans non-binary persons. The team now runs the Garima Greh shelter home for transgender folks in Mumbai and works with international organisations like the UNDP Being LGBT in Asia and the International Trans Fund to enable more changemakers in this space.

An NITK-Surathkal trained engineer, Shaman was a product manager at UpGrad and a social impact professional at Avanti Fellows before shifting full-time to co-lead Tweet Foundation. He is a recipient of the global Echoing Green Fellowship for social entrepreneurs and is a Dalai Lama Fellow at the University of Virginia.

Talking about his teenage and early adulthood, Shaman says “I almost lived a CIS-person lifestyle. I did well in studies, and had a kind of defence mechanism to deal with other things. I went to a top college and got placed in software development. All the while there was an internal struggle, and I didn’t have the vocabulary to say I am a transman.”

“I would appear as a guy but when I would tell my name, my dead name [name given at birth], then people would understand that this person is female assigned at birth.” he says, while talking about the significance of language, name, and identity.

From coming out to becoming a changemaker for trans rights

The coming out journey for every LGBTQ+ person is different, and for many, it is a dreadful moment since it can mean being ostracised and facing crippling social stigma. Shaman recounts that “The first person I ever came out to, even before my family, was my CEO at Avanti Fellows. I was working with Tibetan schools at the time and those students didn’t know if Hindi names were male or female.

He was visiting once in one of those schools and on the way, I was very nervous because he knew me as a ‘She’ and the class knows me as a ‘He’. On the way to the school, I told him these kids think of me as a guy and they called me ‘He’, can you just be careful around them as I prefer it that way? And his reaction was simply to ask “Why didn't you tell me or the team before? We would have just changed your name or preferred pronoun in the company, and we would start referring to you that way.” That for me was a critical moment in terms of just my own personal acceptance.”

Due to the lack of visibility for transmen, there was also an information scarcity. This is one of the issues Shaman started problem-solving for at first. He mentions that in 2016, two years after the historic National Legal Services Authority of India (NALSA) judgement, “I realised that there is zero information about doctors. Where to go? How to change your name? And this was the age of Internet.”

Having joined Facebook groups for FMT (Female to Male) individuals, he started a WhatsApp group with about 50 transmen from Delhi and a few other places and through the group started collecting information using Google forms etc., and then published the information on their own website and through platforms like Quora.

The team then launched a helpline number to offer necessary information and crisis support. So far, this helpline has supported over 1,500 young trans persons across India.

Diversity within the trans community

Through this group of transmen, Shaman was introduced to The Humsafar Trust, a pioneering organisation based in Mumbai that has worked for almost three decades on LGBTQ+ rights and inclusion. Humsafar has mobilised the community for collective bargaining power at many critical points in the history of the LGBTQ+ rights movement in India. It was at one such meeting of Trans people from across India for discussing the 2016 Trans Bill that Shaman saw firsthand the diverse opinions and ideologies among trans rights activists in India.

Despite all their differences what stood out, Shaman says, was the deep-felt agreement among all trans rights activists was that they did not want the next generation to face the same struggles that they did.

One of the challenges Shaman faced in the early days, and to some extent still does, is the lack of recognition for issues faced by transmen within the LGBTQ+ community. “In 2016 nobody considered transmen amongst the transgender umbrella. Transwomen activists would ask questions like - why do you want reservation and protection? Once you have transitioned you can walk on the street, nobody will tease you. Why are you coming into our spaces and taking up our space? But there were a few leaders like Abhina Aher who were very loud supporters for transmens’ rights.”

Shaman adds that “Both transwomen and transmen have a very different early life. Not to generalise, but for transwomen, if they express their femininity, the family will throw them out and they face violence in society. For transmen, the family doesn’t let them go out of the house and forces them to get married the way the family wants, so there is control and violence within the house.”

Shaman realised early on that the only way to bring visibility to issues faced by transmen and that to address them, there needs to be an intersectional approach and all trans voices need to converge and be amplified.

This is why he emphasises empathy and culture building within the organisation. Tweet Foundation organized what is likely India’s first All India Trans Men/ Masculine Persons Summit earlier this year to highlight the issues of the community and drive an advocacy agenda.

“If we can’t build consensus among the seven co-founders, who include transmen, transwomen and non-binary people, then how are we going to build consensus in the larger community?” He also expressed gratitude for his co-founders who espouse a giving attitude, open-mindedness, and transparency in their approach to problem-solving and community building.

From observing ground realities, Shaman mentions that the science and information on transmens’ health is still lacking. For instance, we have a higher blood count in general, and experience cramps and other issues which are not being researched about. To bridge this gap, Tweet Foundation is currently leading India’s first health research study in collaboration with Principal Researchers from Drexel and Harvard University among other research institutions. The study will be used as an advocacy tool to further the support initiatives for transmen in India.

After several pilot programmes, Tweet Foundation has now built an innovative model for upskilling young trans people that accommodates the needs of the community. The team used to train trans people and place them in say a large e-commerce company, but they would drop out within a few months because they have so many other personal and family struggles to handle, gender affirmation surgery procedures, and mental health challenges. Shaman says the key is to build a safe space and demonstrate to young trans people that “You belong here. You are valued here. Take your time and grow at your own pace.”

Through their short-stay home in Delhi and the Garima Greh year-long shelter home in Mumbai, Tweet Foundation offer a nourishing environment for people to first find their feet. And when they have figured out where their passion lies, then Tweet connects them to the right educational programmes and professional networks.

They are currently running the Super 15 campaign to showcase young trans folk who are open to join full-time jobs and internships in a variety of fields like legal practice, CAD designer, website development, and communications among other things.

The team also runs the Trans Yuva Fellowship that empowers young trans folk to become changemakers in their respective cities and states. Through Tweet Foundation’s training and support from the peer learning community, these young people work with government bodies, educational institutes, corporates, media, and other stakeholders to create a more inclusive society.