From being teased for being a transgender to opening her own beauty salon: Deepa’s inspiring story 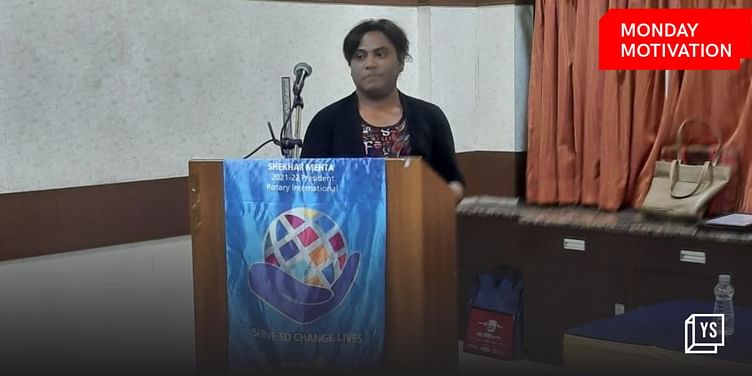 Deepa Bhaskar Gangurde, a transgender who belongs to a low income family from Nashik, had to struggle to win familial and societal acceptance. However, completing a beauty course and opening a salon instilled her with confidence for whatever life threw at her.

From Dilip to Deepa Bhaskar Gangurde , it has been a long, arduous journey.

Dilip, 30 was continuously and constantly teased, castigated, and ridiculed for behaving and dressing “like a girl”. But the transgender has come a long way since then.

From embracing her gender identity to embarking on a three-month beauty care course and becoming a micro-entrepreneur, Deepa has found a new direction – and way of life.

Coming from a village near Nashik in Maharashtra, Deepa’s family was into selling wood.

“My mother was the breadwinner of our house and used to send me to work as well from an early age. My brother and I were involved in selling wood as there was nothing else to do at home,” Deepa says.

As she grew up, Deepa got interested in dance and started to do stage shows. She also became extremely keen on work that involved beauticians and parlours.

However, she says that she always had problems in school as people were always confused about her identity.

"Friends and teachers used to tease me about the way I talked, the way I danced. They teased me on making feminine moves during dance performances despite being a boy. I started getting scared to go into crowds and talk in schools and neighbourhoods."

Many in her family were no different.

Deepa's elder brother never liked or supported her feminine identity. He used to beat her up for “acting like a girl and going out with girls”. Their mother, on the other hand, was supportive.

It was only after she started working in a beauty salon that her brother stopped bothering her. Later, she got support from the Skill India Mission under the Ministry of Skill Development and Entrepreneurship.

And things changed for the better.

Celebrating Srija, a transgender woman who found love and happiness

Deepa has been associated with a LGBTQIA+ community in her area for the past 10 years. The community helped her meet an official from the Skill India Mission who encouraged her to enrol in one of their courses.

Deepa only knew the basics of makeup and simple parlour work such as threading etc. In 2020, she did a three-month course where she learnt more "professional beautician things". The course was part of Skill India’s outreach programme under Jan Shikshan Sansthan (JSS).

Deepa says the Jan Shikshan Sansthan programme helped her know more about the skills and future prospects in the beauty space. It helped her skill up, “find a way in life, and fight against gender inequality”.

She did the course with an intention to start his own beauty parlour one day.

“I learned to do hair spa, bridal makeup. Later I also opened my own beauty salon near my home in Nashik, named Divya Parlour. We started doing very well,” she says.

Today, Deepa is assisted by two other girls in the salon. She also does dancing in stage programmes at times.

“Starting my own business gave me strength. It made me realise the power of my voice along with giving me recognition in the transgender and LGBTQIA+ community,” she says.

At present, Deepa is also a trainer and provides training to many aspiring beauticians. She now wishes to start a professional beauty salon and “join the movie and television industry to do makeup for actors and actresses”.