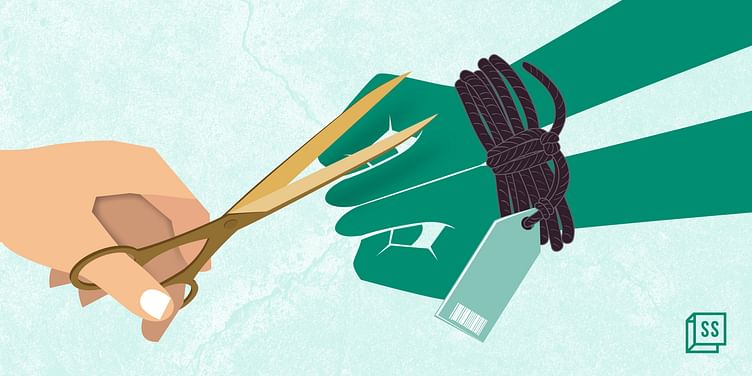 Nasima Gain was trafficked when she was 13 years old and rescued 10 months later. In 2016, she started the Utthan Collective along with other survivors to work for the rehabilitation of trafficking victims. She is also a survivor leader at ILFAT, the first national forum for survivors.

In 2010, when she was just 13 years old, Nasima Gain was trafficked along with a classmate from school in Maslandapur in West Bengal’s North 24 Parganas district and transported in a car to Bihar. She distinctly remembers it was on the day of Saraswati puja.

It’s traumatic for Nasima to recount the circumstances of her trafficking. Rumit Gambhir, a digital strategist who assists ILFAT (Indian Leadership Forum Against Trafficking) of which Nasima is a survivor leader, pitches in.

He informs me that the trafficker, a somewhat-known acquaintance, with relatives in the same village, sold the girls to an orchestra troupe (where they had to go dance and perform in places) in Siwan district.

I sense it’s too painful for Nasima, now 26, and an activist in her own right to recollect those memories. She, however, remembers a childhood of happy memories.

Ten months after she was trafficked, Nasima was rescued, though she doesn’t go into the details of how it happened.

“Once I was back home, though my parents were very supportive, I faced stigma from the community. When I rejoined my school, I was ostracised by my classmates and teachers. I had to shift to another school,” she says.

It’s evident that Nasima is only keen to speak about the work she’s doing along with others to stop the scourge of human trafficking, especially of women and children at its source, and her life as a micro-entrepreneur.

In 2016, while attending training workshops with 56 other survivors, Nasima realised there were several problems that plagued them, including herself. These workshops, organised by Sanjog, an NGO, apart from imparting life skills also offered counselling for those suffering from depression.

“As a group of women, we discovered there were many issues that needed immediate attention, and for rehabilitation to be successful, it has to be community-based,” Nasima says.

Out of 56 women from eight blocks of the district, 12 came forward to form the Utthan Collective to work towards community-based rehabilitation of trafficking survivors.

Nasima explains, “We visit survivors at least 5-6 times in a month, have conversations, and share our own experiences. If they want to file a case, we help them through different processes–contacting the police or hiring a lawyer. If they need treatment, we take them to the hospital. We also facilitate housing in some cases and ensure ration reaches the needy.”

ILFAT, India’s first national forum for survivors of trafficking, she explains, was started with the aim of interacting and rallying with women from other states, and get their voices heard at a larger level.

Nasima agrees that rehabilitation does not stop at the survivor’s reintegration with family.

“We visited two shelter homes in Mumbai and one in West Bengal. Girls were being provided vocational training in sewing or as a beautician. After they come home, they not only face stigma but don’t have the means or the infrastructure to build their lives again from scratch. Who’s going to provide them with a sewing machine or facilities to open a small salon? They don’t have the requisite documents with them,” she elaborates.

Working in eight blocks, the Utthan Collective has managed to secure housing for 20 women and started women’s self-help groups (SHGs) with 11-12 members each that receive training through various government programmes. Along with these, Utthan organises awareness sessions in villages, schools, and colleges to stop trafficking at its source.

Their efforts have paid off. She shares two incidents to reiterate this.

In a village where the team had been organising awareness sessions, a 12-year-old girl was often approached by a 24-year-old man who would offer chocolates. Villagers who had been made aware by community efforts noticed this and kept a close eye on his whereabouts. When he tried to approach the girl one day, the people from the village surrounded him. He managed to flee and never returned.

In another instance, a young boy in Maslandpur who was promised a job as a cook in Mumbai reached the city to check. It turned out it was actually a bar and he noticed a lot of red flags that were spoken about in awareness sessions. He escaped before entrapment, and informed the villagers on his return.

Nasima is now married, and says she’s grateful for the support of her family at every step.

She is also an entrepreneur, does some farming, and runs a shop selling garments and cosmetics with other women of her self-help groups. The second venture has not taken off as planned, as the members stay in different blocks, but she hopes that it will find success soon.

(The story has been updated to correct a typo in the name, and a change in Rumit Gambhir's designation)

Vegan but a fan of chocolate? Head to Auroville to taste organic, single-origin vegan chocolates