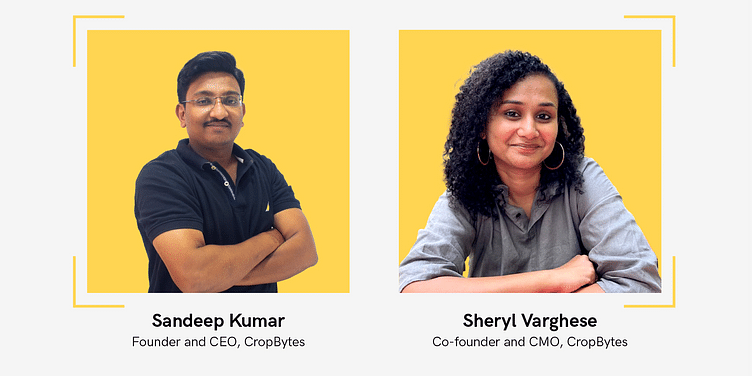 CropBytes is an Ethereum-based farm-simulation game that allows players to own farms, fungible tokens of virtual food, farm animals, produce etc, as well as some NFTs, and also participate in the in-game economy to earn tokens.

Since 2013, Sandeep Kumar has spent a lot of time playing Farmville.

While playing the agricultural simulation game, he would wonder what it would be like if virtual land, farms, crops, etc., had real-world monetary values attached to them.

In 2017, he noticed CryptoKitties–the Ethereum-based crypto game–was being adopted at a rapid pace. This led him to believe that blockchain and crypto technology would drive value creation through virtual currency in gaming.

At the time, ‘Play-to-Earn’ (P2E) and other Web3 gaming buzzwords did not exist. In fact, there were only a handful of crypto games, despite the crypto market going through a bull run.

In 2018, Sandeep took advantage of this whitespace and launched ﻿CropBytes﻿.

CropBytes is an Ethereum-based farm-simulation game that allows players to own farms, fungible tokens of virtual food, farm animals, produce etc., as well as some NFTs (Non-Fungible Tokens). The game also lets players participate in the in-game economy to earn tokens.

“Most crypto gaming companies that started in those years have shut down because they were largely NFT-based. When the market went into a bear cycle in 2019, it became difficult to build liquidity for NFT economies since NFTs are one-of-a-kind and are not exchangeable easily in the bear market,” Sandeep Kumar, Founder and CEO, CropBytes, says in a conversation with The Decrypting Story.

He adds, “Although we also began with NFTs, we quickly moved to creating FTs (fungible tokens) from in-game assets. Now, only 20 percent of our assets are NFTs. In terms of gameplay, we used Web2 principles to maximise fun.”

Co-founder and CMO Sheryl Varghese explains, “In those days, Web3 games—right from CryptoKitties to Tron Dogs—did not have much of a gameplay element. CropBytes was one of the earliest games to introduce solid gameplay and fun elements in Web3 gaming, combined with the potential to earn.”

These factors have kept CropByte’s momentum strong. The platform reportedly has over half a million users and over 400,000 organic downloads across Android and iOS. It claims around 47,000 monthly active users (MAUs) and 17,000 daily active users (DAUs).

CropBytes earns revenue by taking a one percent commission on transactions on the platform, and also from flash sales of in-game assets such as wells, lakes, land, farm animals, etc.

In November 2021, CropBytes raised $2.67 million in a pre-sale seed round for its CBX token, and is also backed by crypto industry entrepreneurs including Sandeep Nailwal, Co-founder of Polygon; Siddharth Menon, Co-founder and Chief Operating Officer (COO) of WazirX and Founder of TegroFi; Nischal Shetty, Co-founder and CEO of WazirX; as well as VC firms such as Draper Dragon, Exnetwork Capital, and Master Ventures.

The team has attempted to replicate the volatile and transitional nature of real-world economies in the CropBytes virtual world.

Users can trade their in-game assets with anyone else on CropBytes’ open market, and their prices are not fixed by the game developer.

Unlike in traditional/Web2 gaming, players control and decide the price of assets they wish to buy or sell.

However, there are algorithms in place to curb inflation and deflation in instances where prices of some in-game assets see large spikes or crashes and may cause players to lose their buying and purchasing powers.

On the platform, each asset has an intrinsic function in the overall CropBytes metaverse and serves different roles, as per the project’s whitepaper.

“For example, trees and croplands produce crops and fruit which require water, which is supplied by wells and lakes. Once harvested, crops and fruits are ground to make food. Mill owners earn revenue from players that grind their crops at their mills,” it reads.

“Similarly, wind turbines and solar panels generate electricity which is used to run these mills and incubators. Animals produce milk, eggs, wool, and other products that can be converted to CBX. CBX as a currency can then be used to buy more assets or other game items.”

The game also thrives on player collaboration, as most players are unlikely to own a wide range of in-game assets.

The CropBytes game typically comprises four types of players, namely: farmers, who run self-sustainable farms and grow their own CBX portfolio; traders, who buy and sell within the game and derive profits; owners, who own huge farms and equipment, and hire farm workers to carry out farming activities; and farm workers, who work on farms to earns wages paid by farm owners.

The future of P2E

Over the last two years, the virtual blockchain gaming segment (and the P2E segment) has been picking up steam. As per an Industry Research report, the global P2E market is projected to reach $3.6 billion by 2028, from $755 million in 2021, at a CAGR (Compound Annual Growth Rate) of 21.3 percent.

Along with CropBytes, the likes of Decentraland, The Sandbox, Axie Infinity, Gala Games, Illuvium, Alien Worlds, etc are leading the segment in innovation (as well as in terms of their market cap).

However, with the onset of the bear market, it remains to be seen if smaller, NFT-based games will once again meet the same fate they did in 2018.

The CropBytes team, confident in its FT-based model, remains bullish about the future. It is now aiming to capitalise on the growing P2E market by introducing mechanisms for in-game asset mining, in-game bounties, tokenisation of assets, multi-chain integration, as well as fishing multiplayer gaming.

(This copy was updated to add context and clarity.)

Hustle is overrated: Fostering work-life balance in tech at PhonePe