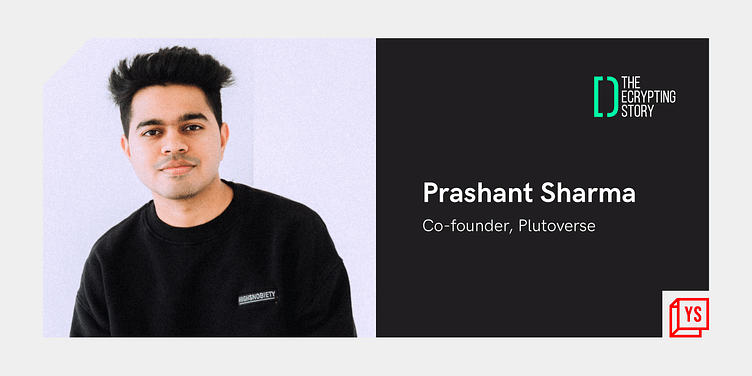 The popularity of the metaverse has put the spotlight on the newly emerging "avatar economy". Many studies suggest that the augmented world of avatars could function as an essential tool for self-expression.

Prashant Sharma and Arjun Dhurve believed that avatars could remove constraints imposed on individuals by wider societal biases. In 2021 the duo co-founded ﻿Plutoverse﻿, a virtual reality world where people seek entertainment and even live their daily lives in their virtual avatar forms.

“While working at my previous startup, NOFILTR, I learnt a lot about consumer psychology on the internet. Most of us are quite self-conscious on the internet about how we look, talk, and express our thoughts. Everything is seen by 100-200 people who get a clear look into our personality. This makes many people anxious. They are constantly seeking approval from the rest of the world and so we wanted to build a platform where individuals could express without being judged,” Prashant tells The Decrypting Story.

Avatar technology startup Plutoverse is focused on creating a metaverse of homegrown virtual avatars and aims to tell stories inspired by and tailor-made for millennials and Gen Z.

Growing up, Prashant would draw inspiration from the fictional world, superheroes, and animated characters.

“To me, superheroes aren't invincible; I look at them as characters who do not give in to societal pressures and I could relate to this aspect,” Prashant says.

In 2021, amid the pandemic, Arjun and Prashant were brainstorming a way to help users access fictional worlds and fictional characters so that they could express themselves fearlessly without any insecurities.

The idea of avatars emerged during the lockdown and the co-founders decided to build Plutoverse after six months of discussions.

“I texted Arjun about this new idea and he came over for a couple of days. The lockdown was imposed, and he ended up staying at my place for six months. That is how the Plutoverse came to be; over the course of six months, we discussed the concept of self-expression through virtual avatars,” he says.

Prashant adds that they observed “how thousands of smart individuals lacked confidence”, and “we are always told what to do”.

“We understood that every individual is unique and cannot be boxed into one common category. So we coined the term 'misfits' to describe a group of people who want to live their lives on their own terms and express themselves as they are."

Inside the world of Plutoverse

The startup is building an AAA virtual open world on Polygon chain where users can socialise, play, build, and earn.

“We are building a platform where users can come on board and use virtual avatars to express themselves without the fear of being judged. Users do not have to worry about their social media presence, as their social media links are not linked in the Plutoverse," Prashant says.

The startup aims to help people to find their own communities outside physical boundaries. It enables users to build virtual identities in a shared universe where users not just coexist but interact with several people.

“We can actually be there via our avatars, roam, talk, and see things. We can go there alone or with friends. Users can do whatever they wish to, whatever they imagine in the Plutoverse,” he says.

The firm intends to help users to monetise by doing what they really like, building a life that they aim to live.

“We’re adopting a social gaming approach. Users get to meet like-minded individuals with similar interests, whether it's music, sports, or ideologies,” Prashant says.

The platform is accessible to both free and paid users and there are several games for every user to earn extra money.

“With various gaming experiences, users can earn various tokens based on their time spent on the platform. We have our own native tokens, which will be offered to the user as a reward.”

The co-founder says Plutoverse wants to convert real-time conversations into virtual experiences and that “everything will be done in avatar mode”.

Interest in the metaverse has surged since 2021 as cryptocurrency and NFTs gained popularity.

According to market research, the global metaverse market is estimated to reach $1,000 billion by 2030, with a CAGR of 43.3 percent.

One of the most important aspects of avatar-mediated communication is the presence of several users in shared virtual spaces. Users will have greater opportunities to interact with creators or become creators themselves.

Prashant explains that an avatar's personality does not have to fall within the range of the actual and ideal selves of humans. So, the avatar's personality could be something other than the user's own personality, allowing them to experiment with characteristics that would be difficult or socially unacceptable in the real world.

“At Plutoverse we have partnered with influencers; these influencers will exist in avatar version on the platform and can look as crazy as possible,” he says.

Research suggests that avatars have the potential to create entirely new type of economies.

Companies such as HourOne, Magic Leap, and NextMeet are working on this emerging technology.

On the competition, Prashant says: “I do not see this as a conversation of who is winning metaverse because metaverse should be built by 100 such companies, not individuals.”

Plutoverse’s immediate goal is to launch the platform in private beta in the next few weeks. “In the next three to four months, we are hosting pre-sale of avatars that will introduce potential users to the world we are building,” Prashant says.

The platform will initially be launched on Windows and iOS, and later on Android, VR, and other platforms.

By the end of 2022, the startup plans to go live in public mode.

“The ethos of Web3 resonates with our ethos. Users get increased control of the platform and that will help them express openly. Web2 companies are controlled by majority of builders, not users,” he says.