[Exclusive] Polygon is not an Indian startup; we have no HQ: Co-founder Sandeep Nailwal after $450M fundraise 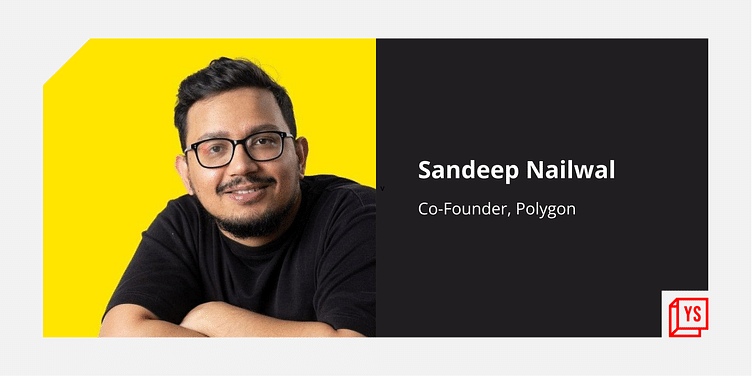 In an exclusive interaction, Polygon Co-founder Sandeep Nailwal highlights the intricacies of Polygon's $450M fundraise, which worked differently from the equity/debt model followed by Web2 startups.

Earlier this week, Ethereum scaling platform ﻿Polygon﻿ (previously Matic Network) made major headlines when it raised $450 million in its first-ever major VC financing round, led by Sequoia Capital India at a market cap of $14.4 billion.

Unlike traditional equity/debt rounds followed by Web2 entities, the funds will be raised through a private sale of Polygon's native MATIC token.

It plans to use the capital to consolidate its lead in the race to scale Ethereum, obviating the need for alternative blockchains and paving the way for mass adoption of Web3 applications.

In an exclusive interaction with The Decrypting Story, Polygon Co-founder Sandeep Nailwal highlights some of the intricacies of this Web3 fundraise.

"Firstly, we are not an Indian entity. Although we co-founders originated from India, Polygon is a decentralised network with no headquarters. As such, the fundraise did not happen through India, or any central location. We only do developer evangelism in India, and don't sell directly to India in any way," Sandeep clarifies, adding Polygon is a community-owned network registered as a BVI (British Virgin Islands) entity.

Addressing the nature of the token sale, Sandeep dispelled fears that the investors could dump their new MATIC tokens on the market and cause a price crash.

Like regular users, the entities and individuals investing in the round can use MATIC tokens to stake them on the network and become validators, which enables them to earn transaction fees from the network. They can also participate in governance votes related to Polygon, and also own a piece of the network and community.

"In Web2, investors get into angel, seed, Series A, B, C rounds, and then the startup goes for its Initial Public Offering (IPO). Only at this late stage does the community get involved. Until then, users don't own anything. For us in Web3, the community joined in first and became a part of the network for a long time, and the VCs came in later," Sandeep adds.

In fact, the startup's investors can also interact with its community, and invest and build alongside other Web3 startups building on Polygon.

Large investors pouring capital into blockchain startups have recently opened up the debate around who really owns Web3. Sandeep admits the VCs are the real owners of Web3 when it comes to several other startups that first raise institutional funding before building a robust community.

But in the case of Polygon, this is not true, he says.

"There are many Web2 and Web3 projects raising hundreds of millions of dollars from VCs right from the start. They do this to attract big VC names, and then focus on community. So the VCs end up owning a significant portion of the blockchain network. At Polygon, we did not have any such luxury. We started with community first, and toiled for four years to build a robust network owned by community. Only now are VCs coming in and trying to become part of the community," he says.

Building the AWS of Web3

When asked about the trend of a few wallets owning a large share of cryptocurrencies such as Bitcoin, Sandeep said early adopters of these tokens should not be demonised. He believes that as early ambassadors and promoters of a cryptocurrency, there are a few players who have built up high ownership.

He sees a few people building up similar positions in the MATIC market, but since these blockchain networks and free-market and community-owned, there isn't anything Polygon can do.

"I know folks who took part in our early Binance IEO and have been holding MATIC since then. The value of their original investments have gone up by around 1500x, but at the end of the day, they are all part of our community," he explains.

With its expanding suite of Web3 scaling offerings, Polygon has also started positioning itself as the AWS (Amazon Web Services) of Web3.

While other startups like Alchemy and Coinbase's cloud suite are also attempting to position themselves as the AWS of Web3, Sandeep notes a fundamental difference between them and Polygon.

In the last two years, Polygon has emerged as the playground for decentralised metaverse-building activities. The firm's solutions have become the go-to protocols and frameworks for building and connecting Ethereum-compatible blockchain networks.

Polygon has attracted some of the biggest projects in Web3 — from DeFi protocols such as lending platform Aave to luxury brands company Dolce & Gabbana, and NFT marketplaces including OpenSea and Mark Cuban’s Lazy.com.

Virtual world projects such as Decentraland and Animoca Brands’ The Sandbox are also laying the groundwork for the metaverse on the network.

Polygon's growing suite of products and scaling solutions have seen widespread adoption, with over 7,000 decentralised applications hosted on them.