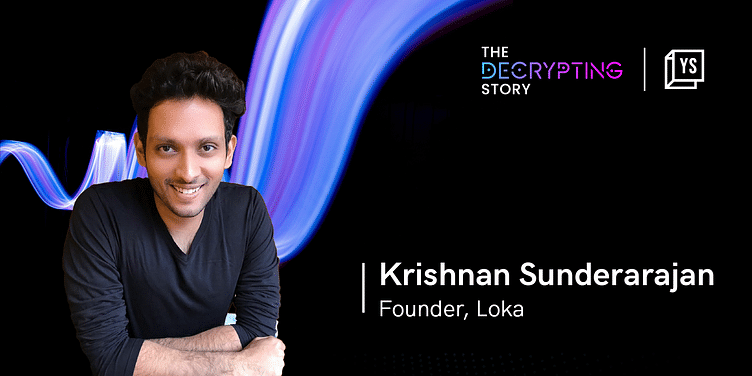 A second-time entrepreneur, Krishnan knows what it takes to build a startup from scratch. His observation of existing trends online led him to build an all-inclusive metaverse. This is his story.

During the pandemic, the odds of having a chance encounter was scarce. Socially distanced meetups and other online options became par with the course of time. Naturally, the pandemic also pushed metaverse to the forefront – people found love, friendships and other important relationships within these universes.

It was one eventful February evening, when 27-year-old Udyan Matta met 25-year-old Gaurika Aggarwal while exploring the virtual streets of Connaught Place in Delhi, on the Loka metaverse. Soon, their avatars started interacting and the pair toured the virtual locations of Central Park, Odeon theatre, and eventually discovered a love for each other along the way.

“The pandemic changed not only the way we live but also altered how we love,” Founder of Loka Krishnan Sunderarajan tells The Decrypting Story.

A survey by Pew Research found that 54% of experts on the subject matter believed that by 2040 the metaverse will be a well-functioning aspect of daily life for a half billion people.

Its popularity is evident. Metaverse platforms like Decentraland, The Sandbox, Roblox, Axie Infinity rose to prominence in recent times, making headlines with the sector set to attract $5 trillion by 2040, according to McKinsey.

The scene is no different in India, with the likes of ﻿Trace Network Labs﻿ and ﻿﻿Plutoverse﻿ garnering the attention of thousands of users everyday. Krishnan, who had been observing the industry all along, noted that the major challenge was not having social interaction. He wanted to give users a chance to experience real life online and thus, ﻿Loka﻿ came to being.

The inspiration was a simple game from his childhood – Grand Theft Auto (GTA) Punjab, a fast-paced action-adventure game set in the hinterlands of Punjab, an unofficial version of a similar title entitled GTA San Andreas, “So this was a game where if you stole a sardarji and their taxis, they would chase you and abuse you in Punjabi or Hindi. And when I heard that from these taxi drivers, I was like, oh my god, this is love at first sight,” he notes. Pretty soon, Krishnan found himself playing games like Call of Duty Himachal Pradesh, Hitman Mumbai and Uncharted Tamil Nadu.

“Over the course of time I realised that when you play games with an Indian context it starts becoming more than a game,” he says. This is when he knew he would make a title of his own peppered with Indian eccentricities.

Having some experience founding a food startup Foodebaba, Krishnan knew what it takes to start all over again. “I had valuable experience of working in a startup founding a company talking to investors. And I said now I'm going to follow my passion,” he says.

That risk seems to have paid off. Loka has nearly two lakh users and is expanding on its existing B2B business of hosting events on its metaverse. It recently partnered with electronics maker ﻿boAt Lifestyle﻿ to host a K-pop concert on its metaverse.

Currently, Loka has a team of 12 employees, who work on tech, brand deals and community partnerships.

Into the Loka metaverse

In the simplest form, Loka can be considered as a metaverse multiplayer game where users can interact with game replicas of Indian cities and visit its iconic destinations. Like for instance, Connaught Place in Delhi or MG road of Bengaluru. Once they have the app downloaded, users need to set up an avatar, customise it to their liking and enter the metaverse.

“There are a lot of people who have Instagram groups to meet at Loka at 10 PM. These people have never seen each other's faces in the real world, but they religiously pop into the world, talk to each other and spend time with each other,” Krishnan says.

The essence of Loka, in Krishnan’s words, lies in giving the user freedom to explore, “If a user belongs to LGBTQ community, it would be challenging for them to roam or express themselves in the streets of Delhi, but in Loka, users can roam, meet, express, and date people in a Made in India setup,” he says.

While Loka is primarily a startup built on the foundations of what already exists, it will soon look to integrate more web3 elements. In the pipeline, is a plan to weave in Loka tokens which will be tradeable on Ethereum. These tokens can be used to buy virtual elements within the universe to further customise a user’s avatar.

As soon as Krishnan learned his episode would air, he rushed to launch the app on Apple’s App Store and Google Play Store. “When it aired, we were expecting like 1000 users. But that night we received about 25,000 users,” he said. He was convinced the app was going to crash because of a surge of users entering the app, but after users could access it despite faced choppy experiences, he recalls feeling good.

On his debut in Shark Tank, Krishnan brokered an offer from Anupam Mittal (Founder of Shaadi.com), Aman Gupta (Co-founder of boAt), and Peyush Bansal (Founder and CEO of Lenskart﻿).

“When the door opened, I couldn’t remember my pitch, despite practicing 50 times. But I believed in Loka. So, I pitched it like it's my first time and it worked out well,” he recalls. To this day, Anupam Mittal, Aman Gupta and Peyush Bansal have been supportive of Loka's growth, he says.

Making sense of the metaverse

The metaverse isn’t safe yet

Despite its many advantages, there are downsides to interactions in the metaverse. In the last few months alone, there have been several reported instances of harassment, assault, bullying and hate speech among users. Like, a recent incident of a 43-year-old woman, being groped and harassed by men in Horizon Venues, a virtual reality (VR) metaverse created by Meta.

This victim’s report of her own experience sparked numerous debates across the internet about safety concerns in the metaverse.  “Metaverse should be a safe space. So, we are working on introducing a few elements to ensure safety for women in metaverse,” says Krishnan.  To prevent harassment within its own metaverse, it will enable women avatars with the option to create one-metre distance if they sense any threat.

“If a user is troubling women their points will go down. And if it goes down beyond a certain limit, basic rights in this world including the ability to speak will be taken away. If the user repeats the behaviour then we will ban the user forever,” he says.

Indian companies have long played catch-up to the west, which is why building an Indian metaverse is important to Krishnan. “We are not trying to be Indian Amazon or Indian Spotify. This is Loka of India and for the people of India.”