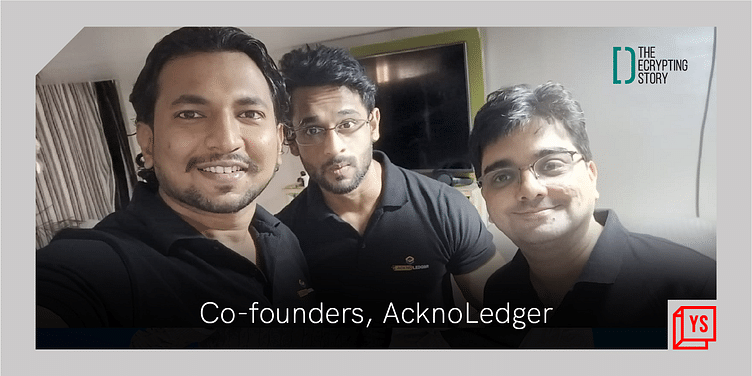 AcknoLedger has built a Universal Content Number Scheme (UCNS) for Web3 assets across a range of NFT and Metaverse ecosystems. It claims its beta product has over 15,000 monthly users and use cases across 100 platforms.

With blockchain tech increasingly integrated into virtual world/Metaverse-building efforts, there is a rising need for identifying, mapping, distributing, and monetising Web3 digital assets.

For entrepreneurs Yash Dahenkar, Abhishek Singh Rajpurohit, and Kuntal Ganguly, this spelt an opportunity to address the problem by creating a unique system for serial identification of Web3 content.

In 2021, they launched ﻿AcknoLedger﻿, a project that deploys its Universal Content Number Scheme (UCNS) to Web3 assets across a range of NFT and Metaverse ecosystems it has partnered with.

“Content is the new economy, so there is a need for a unique serial identification system. Think of it like a small insurance policy for your content. The idea stems from Web2—where you can’t tell for sure if somebody is using or plagiarising your content—but the thought remains the same with NFTs and Metaverses. Here, we can track content for wallets listed with us,” Abhishek tells The Decrypting Story.

So far, AcknoLedger claims its beta product is seeing traction of around 15,000 monthly users. The project has partnered with over 100 Metaverse and gaming platforms for tracking digital assets.

In late 2021, it raised $1.53 million in a seed round from Shima Capital, Krypital Group, Mahadao, Basics Capital, Magnus Capital, Mayor Capital, Scorpio VC, and others. Abhishek added the startup also did an Initial Dex Offering (IDO) for its ACK token to raise further capital.

Its key revenue channels stem from ads on its platform and transaction fees on supported NFTs.

The co-founders’ idea for a universal content numbering system comes from their experience of seeing little to no correlation between existing Web2 serial standards.

Adopting a decentralised approach, the co-founders decided to build the Universal Content Number Scheme (UCNS) to map all NFTs across virtual platforms. Their ambition is to one day see UCNS used as a standard nomenclature for Web3 assets.

In the near term, they see UCNS as an enabler than allows AcknoLedger to also perform interoperability checks for NFTs, track their utilities, scarcity, social proofs, etc., and facilitate new ways of generating revenue for creators through identifying trading opportunities.

Still in its early stages, Abhishek admits there is a lot of work to be done with AcknoLedger, especially in executing its idea for insuring Web3 digital assets.

“Blockchain transactions are immutable, and hence, there is no recursive action possible if the content is plagiarised. However, we bring visibility to such incidents as everything is on-chain and we bring it together on our platform. Going forward, we are exploring the option of building an insurance pool where users who contribute to the pool can get a payout if they make a loss due to their content being plagiarised,” he adds.

AcknoLedger is still working on its insurance component but the co-founders believe the entire project has potential since it retains transparency and anonymity for users.

“The service is connected to user wallets. A user can list multiple wallets and insure them with us. We don’t look at any personal details as wallets are anonymous. Privacy is not compromised at any stage,” Abhishek says.

Like for many blockchain startups, hiring skilled developers is a challenge for AcknoLedger as is charting a clear roadmap when the Web3 world has several gaps and problems to be solved.

However, the co-founders remain bullish in anticipation of a multi-chain/cross-chain future where their universal content numbering system will come in handy for marketing and distributing assets in interoperable environments.

“At present, we give out our APIs for free, but as we grow, we can build it into a dashboard for on-chain analytics and leverage a SaaS-based model,” Abhishek signs off.