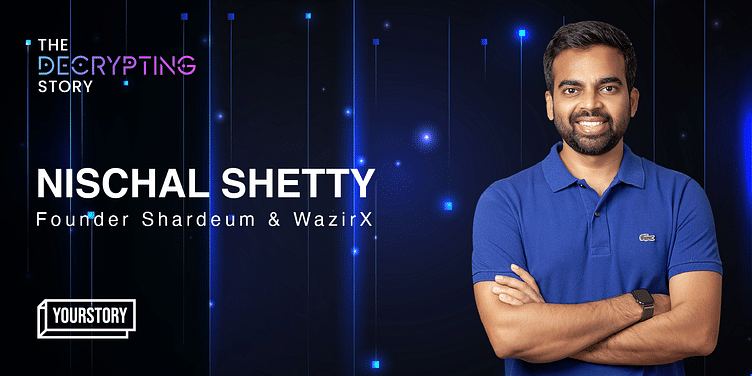 Having been at the helm of India’s largest crypto exchange WazirX for several years, Shetty has now set his sights on expanding to various countries with Shardeum. He sits down with The Decrypting Story to express plans on the recent fundraise and share his views on building a global blockchain.

At The Decrypting Story we had reported first on the exact capital raised on the fundraise.

Having been at the helm of India’s largest cryptocurrency exchange ﻿WazirX﻿ for several years, Shetty has now set his sights on expanding to various countries with Shardeum. To this end, he tells The Decrypting Story, that the attempt was to limit the amount of money each investor brought to Shardeum’s captable.

“That was part of the plan to make sure that we don't have anyone who has a large stake in the network, to keep it as distributed as possible. We have investors from all continents including Africa, Latin America, North America, Asia, Europe. So that's been a good mix of investors from around the world,” he adds.

With fresh capital raised, Shardeum is now looking to expand its team globally “The idea is to hire more people and expand the team on the tech side of things, business side and the marketing side. We've got a good, distributed team from India, the US, Myanmar, Brazil, Japan, UK,” said Shetty.

While crypto markets have ebbed and flowed in 2022, Shetty believes that crypto and web3 adoption is growing in emerging markets like Vietnam, India, Ukraine, Africa, Southeast Asia and Latin America. However, he believes that despite the high demand in these markets, it is still expensive to trade. “If you look at the blockchain today, in the bull run, there is an increase in fees like Ethereum costs $50- $100 transaction fees. That is an unsustainable way for a blockchain to grow,” says Shetty.

Going forward, the startup intends to keep the fees as low as possible in order to make it accessible to everyone in these markets. “We are targeting a fee as low as one to two rupees per transaction, and no matter how many people use it, the fees will always remain low,” he adds.

The co-founder intends to make this accessible to Indian users as soon as possible and is planning to host hackathons in India. “We've been in the Indian market, we understand the market and we're going to make sure that India gets the layer1 blockchain that it needs, where the fees are low, and it can scale all the time,” he says.

Challenges of building a global blockchain

Despite having an upper hand in the India, the founder concedes that building a global blockchain has been a major hassle. In his opinion, there are two major barriers: nascent technology and adoption.

“It's not an easy task to build a technology like this, especially something which is innovative, where it can scale up with the demand and my co-founder, Omar, started working on this in late 2017. So Shardeum’s core technology has been under development for over four years and now it has reached completion. So, if anyone wants to build a sharded blockchain, it will take them easily three to four years. So that's the first challenge.”

Many blockchain today are not scalable, Vitalik Buterin founder of Ethereum proposed the term scalability trilemma. This trilemma makes it difficult it is to create a blockchain that is scalable, secure, and decentralised all at the same time. However, many blockchain enthusiasts believe that sharding can solve the scalability problem.

To be clear, developing sharding technology is not without its challenges. In many ways, the tech is still early in concept, with many sceptical about its security and communication, considering that it yet to be proven to be scalable.

Addressing widespread adoption, Nischal says “The second big problem is adoption and if you look at the layer one ecosystem today, there are blockchain which are five years old. Ethereum is like the first smart contract blockchain that's got a lot of adoption. So, achieving the right kind of adoption is going to be one of the other hardest problems to solve. Henceforth, we want to make sure that as the growth increases,  Shardeum captures a lot of that growth.”

The future of web3

Shetty believes that in the future, the market is going to favour a multi blockchain ecosystem, which would in-turn create a significant amount of market share. “We are already seeing that people are using different chains on the Dapps (decentralised applications), there is inter blockchain connectivity work being undertaken.  I would say the market is going to be large enough to accommodate multiple blockchains. Obviously, there will be blockchains, which will have more market share than the other. But I think any blockchain which is built well and understands the market will ultimately gain significant market share,” he says.

As a result of the enormous market demand, he predicts that L1 blockchains will experience greater demand in the coming years. “There's demand, it's a large market, the market is growing faster than the products that are built out. Same is the case for L1. If you look at the newer blockchains, they're all being built, but the market demand is going to be way higher than that. We've already seen that happening. We'll continue to see that,” he concludes.

(This story was updated with additional inputs from the company.)