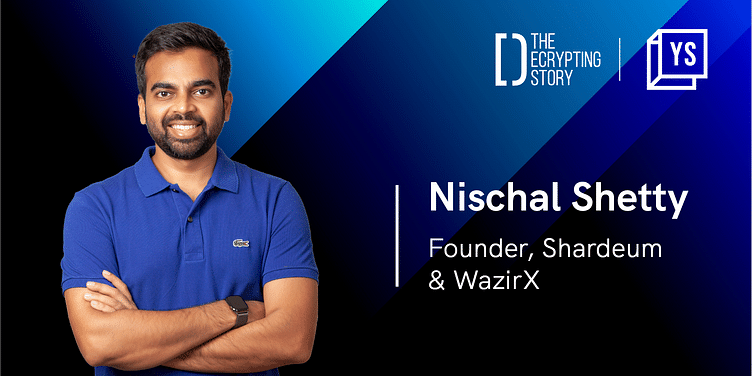 In 2022, Nischal Shetty and Omar Syed teamed up to launch Layer 1 blockchain Shardeum. The project claims to be the only network to employ auto scaling, where it can increase and decrease shards in an automated manner, and achieve infinite scalability.

In the blockchain community, scalability has been the common goal to bring Web3 to mainstream adoption. A key concern, however, is whether the technology can effectively grow to a global level while maintaining security, speed, and decentralisation.

Nischal tells The Decrypting Story, “One solution for achieving scalability is building on Layer 2 chains. But some Layer 2 solutions may compromise on decentralisation and have a ceiling. They are cheaper today because a low number of people use them. If more people start using L2, they might get expensive.”

He says a decentralised network should be affordable and accessible to everyone, which is what led him to build Shardeum, an “Ethereum Virtual Machine (EVM)-compatible sharded blockchain that can achieve infinite scalability, true decentralisation, and solid security”.

The startup is attempting to address the two main problems of Layer 1 (L1) blockchains: limited throughput and high gas fees.

According to the founders, Shardeum will democratise access to decentralisation and, like the Internet, the startup aims to be open, collaborative, and community-driven.

“My attempt at building Shardeum is that there are no L1 solutions today that can support a billion people. Everyone is trying to sell you alternatives, which are not decentralised,” Nischal said.

While building Crowdfire, a social media engagement app, Nischal observed that a lot of platforms that claimed to be developer-friendly were controlled by centralised exchanges.

“I started out as a software engineer developing codes but believed in a decentralised eco-system, as it is a viable strategy that allows fair competition and is not controlled by a single entity. No unfair competition exists in this sector and that fascinated me.”

In 2022, Nischal teamed up with Omar Syed to launch Layer-1 protocol Shardeum. “Omar has been working on developing scalable blockchain software since 2017, and the technology he was developing piqued my interest, so we decided to team up to launch Shardeum," he said.

“Shardeum has been a work in progress since 2017, even though we only announced it four to five months ago.”

Earlier in 2021, Vitalik Buterin, co-founder of Ethereum, expressed that most blockchains today are forced to compromise and choose between optimising for scalability or decentralisation (while security is a given), and identified this as a “scalability trilemma”.

Vitalik identified sharding as one possible solution to the scalability trilemma.

Sharding involves grouping nodes into subsets (shards) and allowing only a shard containing relevant nodes to execute certain transactions, instead of the entire chain having to reach consensus for that particular transaction.

Shardeum is leveraging the concept of sharding to try and tackle the scalability trilemma.

To solve the scalability issue, the startup will employ auto scaling by using dynamic state sharding. In dynamic sharding, each node added to the Shardeum network will aid in boosting TPS (transaction per second).

Nischal said Shardeum is the only chain to employ auto scaling. In auto scaling, when a network witnesses a surge in TPS it can increase and decrease shards without developer intervention.

Nischal added that in other chains a TPS surge necessitates that developers step in and add a new shard to the system. “Users have to wait for a developer ecosystem to push it out and this is very tedious. But Shardeum’s auto scaling means there is no need for third party or developer intervention.”

In the future, the firm plans to launch its native coin called SHARD (with a ticker symbol of SHM).

Sharding as the core concept

A sharded chain is nothing but a network that is split into multiple networks. Here, numerous blockchains are operated in lieu of a single one, and each chain is referred to as a shard rather than a blockchain.

When we compare the maximum TPS managed by Ethereum, Bitcoin, and Solana with VISA or Mastercard, it is clear that L1 blockchain networks do not process transactions quickly enough to be regarded as viable alternatives to the incumbent payment networks.

This is why many blockchains, including NEAR, Elrond, Harmony, and Hydra, employ sharding. However, what distinguishes Shardeum from the rest is that the firm intends to achieve the entire spectrum of sharding without any compromises on decentralisation.

For instance, when Ethereum adopts sharding, the user has to choose which shard the SMART contracts will be on. The complexity of sharding is put on the user.

Nischal claimed that Shardeum makes this accessible to everyone. “If you are a smart contract developer or a user you will never know there is sharding inside Shardeum because it is one single chain for the user. There is no complexity. Users don’t have to choose Shard1 or Shard 20; the network does everything.”

The firm's second goal is to boost the blockchain's efficiency by enhancing the number of  TPS while maintaining cost effective gas prices.

“The ultimate goal is to build a platform that does not have any TPS limit. The Shardeum blockchain is the first one in the world where when there is a surge in TPS, more nodes join the network. It makes us infinitely scalable,” he said.

Nischal said users would have to use their native token to pay gas fees to use Shardeum and the team intends to make the transaction fees affordable for everybody.

“For every transaction on Shardeum, we intend to charge one cent. The objective is to keep the transaction fees as low as possible without compromising on decentralisation."

Nischal continued, "For instance, if we reach our target of one million TPS in an average day, we will generate $864 million, or approximately a million dollars daily, which should be enough to run the servers required to achieve speed.”

The token value would tend to increase when demand increases, and demand could increase when the usage of the token increases. This is how Shardeum intends to earn revenue.

The firm plans to file patents for its codes in a couple of months, but intends to keep the codes open-sourced.

Nischal said, “Currently we are a small team of 22-26 members and we don’t believe that a small team is enough to run a blockchain. You need people to open-source it, rip it apart, find flaws, and you fix those flaws.”

He added that flaws can be found more easily as more people participate. “Six hundred people might identify more issues than six. That is the beauty of open source. Open source is considered to be safer and more robust compared to closed source.”

The founder said the team looks at Shardeum like the internet, which is not owned by one organisation.“It is open for everyone and everyone can contribute to it.”

Nischal said the firm’s testnet (test network) is out and it plans to launch the betanet in the next quarter. "We are focused on getting our mainnet live at the end of the year.”

The startup is looking at raising funds soon.

The founder said Shardeum is also building a distributed multicultural team. “We are a geographically diverse team with members in the US, India, the UK, and Myanmar. We're looking at how to scale across different geographies, and trying to understand the rest of the world to work towards global adoption. We are also looking for investors from different geographies.”

In terms of community development, the firm is working to ensure that the maximum number of people are aware of the platform. “We intend to invite them to our Telegram, Twitter, or Discord channel, and respond to all their inquiries,” Nischal said.

“We are building a global blockchain and onboarding everyone in this ecosystem; it is not just limited to one nation. We are attempting to comprehend and interact with new geographies to contribute to a decentralised future,” Nischal said.