‘You are never alone when you read a book’: Srikrishna Ramamoorthy, founder member, Bangalore Literature Festival, on the event in the city this weekend 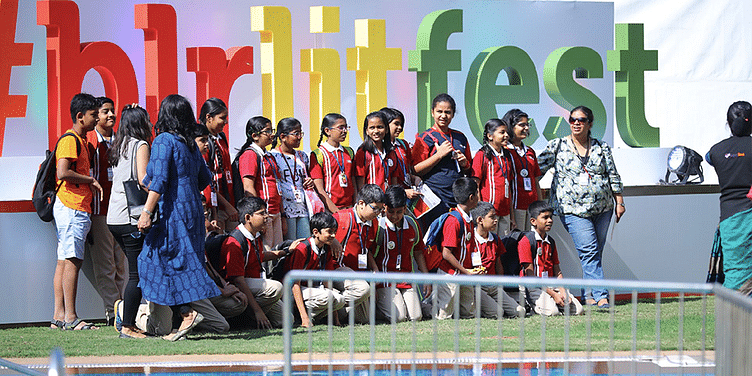 If you love books and literary events, don’t miss the Bangalore Literature Festival on November 9 and 10 2019 in the city. Here are all the details from Srikrishna Ramamoorthy, one of the members of the founding team of the festival….

Bangalore Literature Festival, Bengaluru city’s flagship literary event, is all set for a spectacular eighth edition this weekend and will be held on the lawns of Hotel Lalit Ashok in Kumara Krupa High Grounds.

The festival, which celebrates the creative spirit of the city and commemorates the literary diversity it offers, always brings together some of the biggest names in literature together, on one platform.

YSWeekender caught up with Srikrishna Ramamoorthy, member of the founding team of the festival, who gave us all the details of the event this year…

What are the highlights of the event this year?

We have a lineup of very interesting Indian and international authors and speakers across a wide range of literary and current conversations, like fiction and non-fiction, Bollywood and cricket, Donald Trump, state of the economy, environment and climate change, popular fiction, sci-fi and speculative fiction, mythology, mental health, poetry specials, Jane Austen readings and much more. We will also be celebrating Girish Karnad's work and life.

The programming elements of the free-to-attend Festival include three staging venues for panel discussions and literary sessions including a rainbow of Indian language programming, three venues for children’s reading and programming and a one-of-its-kind platform for first time, unpublished authors to pitch their narrative to publishers. There will also be writing workshops, a buzzing bookstore, reading nooks, interactive literary installations, open-mic platforms, an annual book prize and more.

One thing that sets our Festival apart is the fact that it is entirely citizen/community funded and it is managed without any corporate sponsorship or funding, making it a neutral platform with freedom and diversity in programming and with significant volunteer energy to execute the event each year.

Who are some of the famous literary panelists this year?

What was special in last year's festival and what worked well and what didn't?

Being the election year, last year, we had a lot of conversation around the political situation and current topics around those. We like to ensure we have sessions on current conversations that people are most interested in. This year, we're focusing on mental health and climate change.

Who are the non-literary celebrities you are expecting this year?

We have Australian environmentalist and Australian of the Year, Tim Flannery, Financial Times chief US commentator and columnist, Ed Luce, American political scientist and counter-terrorism expert, Christine Fair, Gen. Syed Ata Hasnain and the best umpire in the world during his time, Simon Taufel.

What is the aim of the festival and how has it evolved over the years?

Bangalore Literature Festival was founded in 2012, as a non-profit trust, and we have had seven very successful editions to date with over 800 authors and speakers from India and abroad participating through the years. We conceptualised the Festival with the guiding principle of making it a flagship annual literature festival, rooted in Bengaluru and with global aspirations and to create a compelling space for engaging and thought-provoking discussions on literature and life.

Today, the festival has evolved into India’s largest independent and community-funded literary conclave and Bengaluru city’s flagship annual literary and cultural experience. It focuses on rekindling the romance with literature and fostering fine reading and writing, especially amongst the young population of the city.

What are some of the firsts this year that you are proud of?

We’re very proud to be India’s first, largest and only community funded literary Festival in India.

We are also very proud to have dedicated programming on science fiction and speculative fiction. Authors who have come in the past are Bruce Sterling and Samit Basu and this year, we have Ian McDonald and Yudhanjaya Wijeratne.

Another first is LitMart, India’s first and only pitch platform for aspiring authors. This is a unique forum where budding authors get a chance to pitch their book ideas to literary agents, commissioning editors and publishers. Four book deals have emerged from LitMart.

We're also the only Lit Fest to have extensive children's programming with three venues just for children and young adults.

What are the some of the other important events that will feature in the festival this year?

Here are some of the major events at the Bangalore Literature Festival this year:

1.  Blue About Green - Beyond Climate Change: Chitrangada Choudhury, Madhav Gadgil, Navroz Dubash and Tim Flannery with Karthik Shanker - Australian Environmentalist, with other climate change and environmental specialists will discuss the future of the planet.

2.  Surviving a Terror Attack – Former Jet Airways cabin-crew and the face of the Brussels Airport terror attack, gutsy survivor Nidhi Chaphekar will talk about her experiences.

3.  Bad Man – Gulshan Grover, one of the best-known antagonists in Bollywood, will engage in a candid conversation.

5. The Power of Realism – A writing workshop will be held by Australian short-story specialist Julia Prendergast.

6. Khooni Baisakhi – A reading will be held by Navdeep Suri with Harpreet Singh on Jallianwala Bagh centenary.

What are the special events for children?

This year the Bangalore Literature Festival has expanded the children’s programming to include three forums - Abracadabra for 4 years+; Khul Ja Sim for 8 years+ and Shazam for 12 years + on both days of the Festival and an exclusive bookstore for children. Titled ‘Children|Literature|Fun - (C|L|F)’ this includes writing workshops, illustration, storytelling, creative games, music performances, all in a carnival atmosphere.

Some of the exciting elements of C|L|F this year are sessions with authors including Geeta Ramanujam, internationally renowned children’s storyteller, educator, Janaki Sabesh, actor of children's book 'The Jungle Storytelling Festival'; Lavanya Karthik, author of the Ninja Nani Series and illustrator of the graphic novel on President Kalam; Savio Mascarenhas, art director, Tinkle Comics and many other interesting sessions and discussions by noted children’s writers.

What are some of the other highlights that visitors can look forward to?

The festival will also see some stellar evening music performances – like the event, Shakespeare to Shishunala: A Poetic Journey by Manasi and Friends and a show by the Thayir Sadam Project.

In your opinion, why is reading so important, especially during these days of low attention spans?

They say you are never alone when you read a book. While attention spans are getting lower, I don’t see reading habits changing.

Which are some of your favourite books of this year?

A Gentleman in Moscow by Amor Towles, Early Indians by Tony Joseph and Sapiens by Yuval Noah Harari.

Will any awards be given out?

The Bangalore Literature Festival and Atta Galatta, the city-based bookstore and hub for literary events, will present the Atta Galatta–Bangalore Literature Festival Book Prize to honour the best of English fiction and non-fiction and Kannada writing. There will also be a session in partnership with The New India Foundation for the Kamaladevi Chattopadhyay NIF Book Prize for the best non-fiction book on modern/contemporary India.

Looking good: How men's fashion startups are transforming the style landscape of the country

Find the right balance: Here’s why a good dinner is important for health and wellbeing

‘Do unto others as you would have them do unto you’ is my maxim': Priyanka Sharma, Co-Founder, Uno Más Tapas Bar Kitchen