Bangkok to Bali: Master class with Chef Sebastian Simon and a feast of shrimp, sea bass and tiger prawns 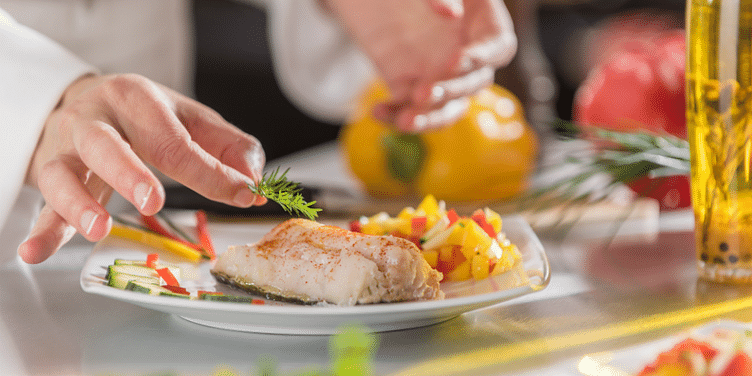 Chef Sebastian Simon from Melbourne is in Bengaluru to take some Master classes in the city. YSWeekender caught up with him to know his views on food and the secrets behind his culinary wizardry

If you would like to enjoy an aromatic laksa broth, a serving of Mushroom Larb, a main course of Tofu rice paper parcels with cassava crisps topped with chilli jam and a Vegan chocolate torte -- get ready to attend some Master Classes with Chef Sebastian Simon, who will wield his ladle at an exclusive food festival this weekend, and share the secrets of his culinary skills. He will be holding a Vegan night at Misu restaurant and will also be taking one of the sessions at the event, World on a Plate - season 4, tickets for which will need to be purchased.

Sebastian Simon worked at the Taj Exotica, Goa and Leela Kempinski, Bengaluru, before relocating to New Zealand where he began his international career at Orbit Restaurant and Brassiere of Skycity. Later, he moved to Melbourne, Australia and took over as the Executive Chef of the Mirvac hotels. He has collaborated with several leading chefs like Gary Mehigan, George Calombaris, Adriano Zumbo, Janice Wong, and Elena Jo Duggan. Chef Sebastian also won the "Executive Chef of the Year " award in Victoria in 2004.

At present, he is a Chef Instructor at The Le Cordon Bleu Culinary Arts Melbourne and has his own consulting business. He is also an artisan salt maker. His specialisations include Australasian cuisine, indigenous, street food, molecular gastronomy, vegan food, and French cookery.

Here’s an exclusive interaction with the culinary wizard…

YS Weekender: Can you tell us about the Master classes that you are going to take up in Bengaluru?

Sebastian Simon: There will be a Misu Vegan night with the theme Bangkok to Bali at Misu Indiranagar, Bengaluru on May 29. The three-course vegan menu will include an interactive session with me, where you can learn more about vegan cooking, nutrition, and my philosophy to improve your diet. This special vegan menu is a journey to three destinations and features dishes like larb, laksa broth, cassava, and more. My recipes will celebrate local produce but cooked with inspiration from Bangkok, Kuala Lumpur and Bali.

The second event is a WOAP - World on a Plate - season 4 event that will be held at Ritz-Carlton, Bengaluru, headlined by Chef Marco Pierre White. I am being featured as one of the Masterchefs in the Philips Taste Theatre, organised by Gold Rush India.

I will focus on ethically sourced seafood and in my class, I will demonstrate how every part of a fish can be used for stock. I will be making shrimp and rice crusted Indian sea bass, charred tiger prawns, smoked spuds, kaffir lime reduction, and village greens. For both the classes, I will be using smoked Nori Chilli salt (manufactured in Australia).

Also read: What keeps Rahul Leekha of Coffee by Di Bella charged during the weekends

YSW: What do you love about cooking? What are your views on food?

SS: My philosophy and approach to cooking has been one that is focussed on creativity and depth of flavour. I believe food must be clean and sourced from ethical and natural resources. You should avoid processed food, waste less, and watch out for food miles.

SS: It began with a few failures, and my experience at Miss World 1996 at the Windsor Manor Sheraton in Bengaluru. The sheer glitz and glamour of the event was fascinating, but I realised I was not looking deep enough into the underbelly of the culinary world. Food began to inspire me and as chefs started to share their knowledge, and I realised I wanted to be one of the best. So, I pushed hard to get to where I am today.

YSW: What is your favourite cuisine? Which cuisine in your opinion is the hardest?

SS: My favourite cuisines are Asian, Japanese and Australasian. As for difficult cuisines, I would say that every region has dishes that are tough to create.

YSW: Can you tell us about your encounter with the MasterChefs of Australia?

SS: I met the MasterChefs of Australia during the first two seasons of World on a Plate. I was the principal chef consultant organising the entire back house operations from sourcing ingredients to liaising with the local hospitality partners. My favourite moment was sharing a dish that my mum cooked with Matt Preston.

I took Chef Gary and Matt Preston to Russell market and we sourced some kovakka or scarlet gourd. He loved it so much that he used it in his Masterclass. I had invited my mum to his class where he singled her out, and applauded her for sharing her recipe and the ingredient that he could use in his class. While I was starstruck, I loved their simplicity and the fact that they were so approachable and flexible.

YSW: Which dish do you love to cook over and over again?

SS: I like to cook anything that is seasonal, fresh, and made with love. My mother’s Kerala chicken curry and home-made chapatis are on top of my list of favourite foods.

SS: In Australia, we are moving to ethical food choices. For example, Attica, an acclaimed restaurant in Melbourne, decided not to buy seafood that is unethically sourced and not locally supplied.

I also find our indigenous foods are getting a lot of attention. Other trends include farm to table food, eating insects (ants), which is a big delicacy in top restaurants in the world and fermenting foods.

YSW: Please give us three tips on cooking a great Indian dish?

SS: I would say – look for fresh spices, enjoy cooking as well as tasting, and start cooking regional village-style dishes that are slowly getting lost in the world of fast-food.

YSW: What are some of the mistakes that Indian cooks make?

SS: Many cooks settle for mediocre produce and forget that some of the best recipes are with their mothers and grandmothers. All they have to do is ask.

YSW: What do you like to do when you are not working?

SS: I love to spend time with my family. I also love playing on the six string.

YSW: What are your views on Indian food?

YSW: Can you tell us about your work with Lava Salts?

SS: My infused, artisan salts add that X factor to a dish, making a plate of food more complete and well rounded. I have always believed in creating flavours that have a long-lasting sensory experience. The smoky flavours of Lava Salt products are perfect for salads, seafood, meats and desserts. Add them to your favourite recipe and I can assure you that your dish will look and taste great.

YSW: What is your advice to young and aspiring chefs?

SS: Ask yourself “why” you want to be a chef. Focus on simple things and do them well. Value your skills, your produce, and your relationships with your colleagues.

YSW: What are your views on the renewed interest in food that people have these thanks to cookery shows like MasterChef and Chef’s Table?

SS: I feel this is helping shape our views on food. These shows have also opened our eyes to why people choose to be a chef as a vocation. Young people also realise that creativity through cooking is a top-notch profession.

YSW: What are your future shows and plans on the food front and the personal front?

SS: I want to keep teaching others what I have learnt. Through Le Cordon Bleu, I have been able to meet countless students from all over the world. I want to highlight the fact that there is a lot of depression among chefs. I wish to meet like-minded cooks and listen to their stories. I also want to bring my Lava Salt artisan salts to India and show people how to cook with them.

Your comfort zone Is inhibiting your success