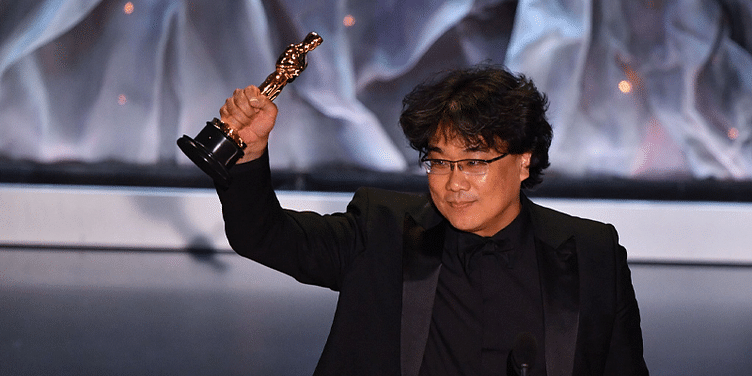 The director, who had already come up the stage thrice and promised to drink away the night, let his producers bask in the limelight for the big finish.

"I'm speechless. We never imagined this to ever happen. We are so happy. I feel like a very opportune moment in history is happening right now," co-producer Kwak Sin Ae said in her acceptance speech via interpreter Sharon Choi.

As the lights dimmed, award presenter Jane Fonda and the audience, including Hollywood stars Tom Hanks and Charlize Theron, urged the Academy to let the team finish their speeches.

Bong still did not come up to the mic, letting Miky Lee, the South Korean movie mogul, to speak about the film.

While Parasite's chances in the international category were a lock, the best picture and director win is a huge upset for British filmmaker Sam Mendes' war drama "1917".

The South Korean film, about a poor family which worms its way through a rich and gullible household to tragi-comic results, was also up against seven other films: Ford V. Ferrari, The Irishman, Jojo Rabbit," Joker, Little Women, Marriage Story and Once Upon a Time in Hollywood.

Parasite has been on a unstoppable march since its debut at the Cannes Film Festival where it became the first South Korean film to win the top, Palme d'Or, Award.

The universal love and acclaim that the film has been receiving warmed the hearts of even the notoriously conservative Academy voters, leading up to a historic night that will pave the way for other international films.

Parasite went into the Oscars with an impressive haul of trophies at the Golden Globes, the BAFTAs and the Screen Actor Guild awards where it won the best picture equivalent of best ensemble cast in a motion picture.

Bong is not new to the western audiences and first broke on the international scene with "Memories of Murder", a cult favourite of the director's fans and credited for being one of the films of the new wave in South Korean cinema.

The director will continue the Parasite saga in a television series, which will expand on the universe that he created in the movie.