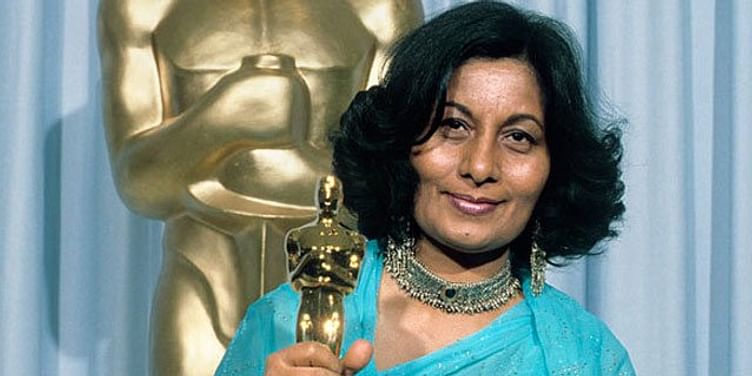 The Kolhapur-born Athaiya won an Oscar for her work in the 1983 epic film Gandhi. She began her career as a costume designer in Hindi cinema with Guru Dutt's 1956 superhit "C.I.D."

Costume designer Bhanu Athaiya — India's first Oscar winner — died at her home on Thursday after a prolonged illness, her daughter Radhika Gupta said. She was 91. Athaiya won an Oscar for her work in the 1983 epic film Gandhi.

Her last rites took place at the Chandanwadi crematorium in south Mumbai.

"She passed away early this morning. Eight years ago, she was diagnosed with a tumour in her brain. For the last three years, she was bedridden because one side (of her body) was paralysed, her daughter said.

The Kolhapur-born Athaiya, who worked till just five years ago, began her career as a costume designer in Hindi cinema with Guru Dutt's 1956 superhit "C.I.D." She went on to work in over 100 films.

She won the Academy Award for Best Costume Design in Richard Attenborough's Gandhi, with Ben Kingsley as the Mahatma, along with John Mollo. The lavish biopic of Mahatma Gandhi swept the Oscars with eight awards.

"It's too good to believe. Thank you Academy, and thank you, Sir Richard Attenborough, for focussing the world's attention on India," Athiaya had said in her acceptance speech at the Academy Awards.

In 2012, Athaiya returned her Oscar to the Academy of Motion Picture Arts and Sciences for safekeeping.

In an earlier interview to PTI, the veteran designer had said she doesn't have regrets about giving the award back.

"I have wanted this for some time. I want to thank the Academy for helping me. Many Oscar winners in the past have returned their Oscars for safekeeping. It is a tradition with the Academy," she had said.

Athaiya was apparently worried for the safety of the trophy. She had previously donated "a huge collection of papers relating to "Gandhi" to the Academy.

Recalling the moment her name was announced, Athaiya had said fellow nominees told her she was a front-runner for the best costume award.

"I was sitting in the audience with the other nominees in my category. They all told me that they did not stand a chance to win the Oscar. They told me my canvas was huge, so I would definitely win the award. In my mind, I had told myself that I had done my best, that I had done justice to Gandhiji's name and the freedom movement.

"When they called my name, I did not allow myself to get carried away. I calmly went on the stage and thanked Sir Richard and the Academy. When I went backstage, I was surprised as there were so many photographers taking pictures. But it was a great feeling. I was happy," she recounted.

The veteran, who defined the aesthetics of Hindi cinema through her prolific work, created some of Bollywood's best-remembered looks, including Vyjayantihmala in "Aamrapaali," Waheeda Rehman in "Guide," and Zeenat Aman in "Satyam Shivam Sundaram."

One of the most respected names in the film industry, Athaiya also worked with noted filmmakers like Yash Chopra. And, in a career of more than five decades, she won two National Awards -- for Gulzar's mystery drama "Lekin" (1990), and the period film "Lagaan" directed by Ashutosh Gowariker (2001).

Things did not change much after the Oscar win, she said in 2010. The costume department continued to be a neglected part of the Indian film industry.

"Costumes have a huge role in making a film look real and believable, but Indian filmmakers have never given due importance to it, and nowadays, the trend is to just go shopping abroad and put things together. In my opinion, that is not the correct thing to do," she said at the launch of her book "The Art of Costume Design," published by Harper Collins at the time.

Fix it with food: Author and nutritionist Kavita Devgan tells us how superfoods are super healthy in her new book