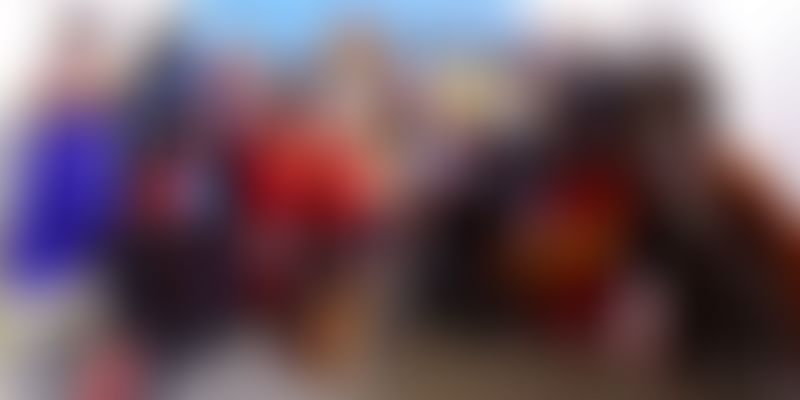 Comic Con India is on a mission to create unique pop culture events and engage with comics fans across the country. Founder Jatin Varma reveals why he developed a business around comics, the next Comic Con, and how the new normal is changing things.

Comics have been a part of most of our childhoods. From internationally acclaimed DC and Marvel comics to closer-to-home comics including Tinkle, Chacha Chaudhary, Tenali Raman, Champak, and Panchatantra, among others, comic books have been an integral part of growing up.

But how many of us were passionate enough about comics to make a career out of it? Delhi boy Jatin Varma was. The economics and international studies graduate from University of Washington dived into creating and running his own firm, right out of college.

“My other professional experiences were limited to the internships or part-time jobs that I did in college,” Jatin says during an interview with YS Weekender.

With an interest in books, music, and films, Jatin left the US and moved back to India to explore opportunities, and in 2007 founded Twenty Onwards Media. The alternative media house had interests ranging from publishing to film, and live events.

In 2011, Jatin brought the concept of international comics conventions to India and started the country’s first Annual Indian Comics Convention in February the same year, in New Delhi.  This was further expanded by creating the traveling version, Comic Con Express.

In the last eight years, it has grown to multiple events across the country under the entity Comic Con India. It launched its property in Ahmedabad last year.

YS Weekender got into a conversation with Founder Jatin Varma to trace his entrepreneurial journey.

YS Weekender (YSW): What inspired you to get into the business of comics?

Jatin Varma (JV): A bunch of stuff. Firstly, I did not view it as a business. I  saw it as a passion project. I already had a successful content production business that was running on the side. I was (and am) a comic book fan, I was attempting to publish comics back in 2011 and I felt doing a Comic Con should also be part of that attempt. It only became a business after the success of the first show and that's how Comic Con India started off.

YSW: Why are comics so important?

JV: For me that is like answering why is oxygen important, the simple answer is that I cannot live without either. On a serious note, I feel that it is such an intense storytelling artform and for me it seems more immersive than even a movie or a television show honestly. But I am also extremely biased as I am invested in comics way more than normal people.

YSW: What are the few challenges that you have faced over the years of organising Comic Con India? How did you overcome them?

JV: The challenges continue as the business grows and evolves (case in point the current pandemic crises). But, initially the main challenges were selling a concept that was totally unique, not just to potential partners or exhibitors but also fans. Plus, my background was in content and not events, so there was a steep learning curve, when it came to organising live events. We made lots of mistakes, learnt from them, and kept working hard and moving ahead.

YSW: What marketing tools did you use to first spread the word back in 2011? How has it changed over the years?

JV: It was social media right at the beginning and, over the years, we have solely focused on digital marketing to promote our shows.

YSW: What was the footfall for the first Comic Con held in Delhi? What was it last year?

JV: We estimated that about 10,000 people visited Dilli Haat in 2011 on that weekend and they would have also visited our setup. Our show was free to enter and was set up within the crafts bazaar.

In 2019, we witnessed close to 40,000 people visiting our ticketed show over a three-day period. The ticket price is Rs 599 per person, per day.

How this couple is slowly building Kokaachi, a startup in the serious business of comics

YSW: What are your targets for the next year or years ahead?

JV: The pandemic has essentially shut down the events industry and thrown all business models out the window. So, at this point, we have not set any particular targets as we are not really sure when large-scale events can come back in full force.

YSW: How do you differentiate each Comic Con from previous year’s?

JV: Our aim is to always keep innovating, introducing new content to visitors, and improving the experience each year.

YSW: Now that people are living in a new normal, how will this year’s Comic Con festival be different?

JV: I am not totally sure how different it will be, as it depends on when we come back, I am sure masking and social distancing will certainly be a part of it.

YSW: When are you planning to organise the next Comic Con India convention?

JV: That is the billion dollar question – and we do not know yet. We are monitoring the situation state by state and we are hoping we'll have more clarity in the coming months.

YSW: What are your aspirations for Comic Con India?

JV: Quite a few, but the pandemic also helped us introspect as we waited for normalcy to come back. I am hoping that the next 10 years of Comic Con India are focused on expanding the geographic reach of our live event (and making that viable as well) and we also start creating or enabling content, rather than just being a passive platform for showcasing it. Content would range from not just physical comic books, but all sorts of content.

YSW: Who is your favourite superhero? Why?

YSW: Do you feel comic books are losing their significance gradually?

JV: Not really, the biggest movies and shows over the past decade have come from comic books. If anything the power of comics will keep growing in the years to come. The physical book, comic book, is just one part of the story. It is a medium that goes beyond just the book.

YSW: If not the business of comics, then what?

YSW: As an entrepreneur, how important is it to make the business a part of your life?

JV: I started working right out of college; I did not know how to run a company or even be professional, I learnt it as I kept doing it. And for me, I was also doing something that I was personally really passionate about;  it was part of my life.

However, as I grow older (maybe wiser), I have learnt (the hard way) how to also carve out my personal life and not let it be dominated solely by work. But, that is a hard task, especially when you are so personally invested in the idea.

YSW: What are your hobbies and interests, beyond business?

JV: Comics obviously, but i like to think of myself as a pop-culture collector. So, I collect a lot of stuff memorabilia. I have also become a sneakerhead lately.

YSW: Who is your inspiration -- both in your personal and professional life?

JV: My father. He helped me start off my business and never really questioned it. Guided me through all of it and was there whenever I needed him. In fact, that goes for both my parents. They are my inspiration.

YSW: One regret? One moment of pride?

JV: Tons of regrets, but I wish I had started ticketing our shows from day one. Moment of pride, finally turning profitable.