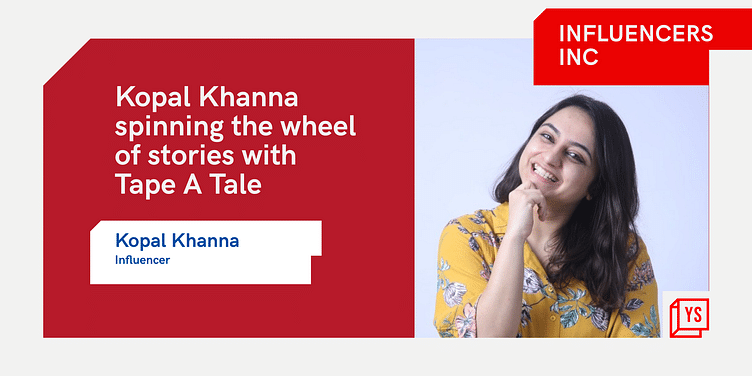 In a recent conversation with YourStory’s Influencers Inc, Kopal Khanna, who is the Chief Curator and Founder of the platform Tape A Tale talks about her journey of storytelling.

The creator’s economy is buzzing with activity, especially with new creators joining to showcase their innovative content every single day. Amid the rush in the ecosystem, here’s a creator who makes space on the center stage for others.

Kopal Khanna who runs the popular storytelling platform Tape A Tale is a creator who has been curating stories for the audience and also letting ordinary people narrate their extraordinary tales through her venture.

Her platform Tape A Tale has an overwhelming reach of 2.26 million subscribers on YouTube.

Speaking about her journey, Kopal says that she does not consider herself as a traditional influencer and her role is more in line with that of a curator.

She left her corporate job and created a space where ordinary people could come and speak their mind in all honesty.

“It’s a platform where people can be vulnerable and truly be themselves,” she says.

She shares that in the beginning when she launched her platform, she used to ask her friends to tell stories. However, now that the platform is popular, Kopal picks the stories on the basis of the reliability factor and the satisfaction you get after hearing a story.

The platform’s target audience is usually between the age group of 18-22 years and she has on boarded people from that age group so that they can pick the stories on the basis of whether they can relate to it or not.

Commenting on the monetisation aspect of the business, Kopal mentions that her strategy is the same as any other creator. The platform benefits from the personal reach of the people who come to the platform to share their stories. Additionally, brand endorsements form an important part of the monetisation process and are a good revenue stream. Tape A Tale as a platform also conducts a number of workshops and offline events as well. “The revenue streams are multiple but when it comes to brand endorsements it’s pretty much the same,” she says.

In terms of future roadmap, she shares that the platform will be experimenting a lot with the formats of the content while sticking to their niche in the upcoming future. “You will soon see us experimenting with the way we tell our stories,” she says.

In the rapid fire round of the interview conducted by YourStory’s Influencers Inc, Kopal talks about her inspirations, her favorite creators and reveals many other interesting facts about herself.

How to deal with seasonal allergies