Normalising love: This Instagram page run by 3 journalists is helping people look beyond the shackles of faith and tradition 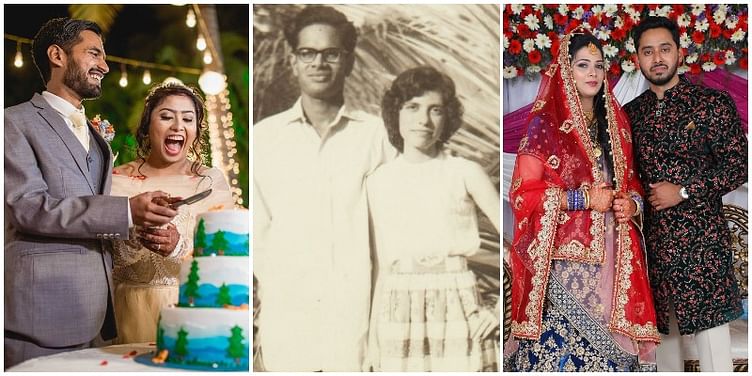 ‘The course of true love never did run smooth.’

Four centuries ago, Shakespeare predicted what many Indian couples go through today. For many inter-faith, inter-caste, interracial, and same-sex relationships in India, the path to euphoria is dotted with obstacles.

According to a study by Princeton University, 10 percent of all marriages are inter-caste, while 2.1 percent of them are inter-faith. However, with conspiracy theories such as ‘love jihad’ abounding, such marriages increasingly find themselves in peril. A Supreme Court ruling revealed that there were 288 cases of honour killings between 2014 and 2016.

“We were bothered by the love jihad narrative, which is a completely fake narrative. It was still a fringe phenomenon but by the time the Tanishq ad came out, it started becoming very mainstream,” Samar tells YS Weekender.

That’s when they decided to celebrate non-conventional marriages and started an Instagram page ‘India Love Project’.

“What better way to counter a fake narrative with something that is true,” he quips.

After 500 short stories and 200 books, 87-year-old Ruskin Bond starts all over again every morning

Launched with two stories in 2020, India Love Project celebrates ‘love and marriage outside the shackles of faith, caste, ethnicity and gender’.

The initiative relays stories of how people from different backgrounds met each other and fell in love.

“Pravin and I met in 2016 at a CrossFit gym in Bangalore. He is a Goan Christian, born and raised in Maharashtra, and I am a half Bengali, half north Indian Hindu. I was drawn to his simplicity and rawness, sporty attitude, love for dogs and passion for staying fit. It never crossed my mind that we were not raised in the same faith,” writes Moupiya Ukil of her relationship with Pravin Carvalho.

The post reveals how the couples navigated through religious prejudices and convinced their families to be a part of their happiness.

“Finally, one rainy day my papa proposed marriage to her. Amma accepted. But she was a Nair Hindu, and he was an orthodox Christian. Their parents did not accept their union. So they waited for almost five years without seeing each other until their parents came around,” Nandhana Saji tells the story of their parents Indu P Nair and Saji Thomas.

“For many of the couples in the stories, this is the culmination of their efforts. While the reader finds these happy stories, their struggles are often recorded within a line or two. But these lines indicate how long families took to come around, often many years, and the other struggles involved – trauma, emotional blackmail, etc,” Samar says.

But most importantly, the page normalises marriages that are outside the conventions of tradition.

“We got married in 2016 under the SMA [Special Marriage Act], followed by ceremonies with our families. It was not easy for us and there were challenges—we even grew apart in the middle before we found our way back—but we also found support from our dearest and closest ones. That’s the only thing that matters,” writes Sukriti Chauhan of being wedded to Irfan Khan.

The entries are received through a Google form, and are verified before they are published.

Samar says that the team was inundated with positive responses, with many couples wanting to share their stories. Trolling, on the other hand, he says, has been remarkably little.

“A lot of people say that this is the one bright spot in the morning that they begin their day with,” he says.

Many couples navigating their relationships reached out to the founders for help and advice. This led them to consider offering inter-faith and legal counselling services as well.

“So many calls came for help that we realised that we could not wait. So, we put out a call for some volunteers. Those are not the couples who you see on the handle. Almost every day we receive a call for help or advice,” says Samar, who is also the Editor of Article 14.

The founders – all journalists – run the page as a part-time initiative, with the help of around 15 lawyers and three to four mental health counsellors volunteering with them. Priya and Niloufer edit the write-ups, and Samar connects people looking for help with counsellors.

It took me 15 years to play a lead role: actor Avinash Tiwary

The interesting thing, according to Samar, is that older love stories seem to have been more open, even though the era they bloomed in was supposedly more orthodox.

“Today, polarisation is in our faces all the time, and it has become acceptable to say that I’m bigoted and prejudiced. But back then, it wasn’t.”

Many people, such as actress Kalki Koechlin talking about her relationship and her baby, told their stories for the first time through the Instagram handle.

“One couple wrote that they had found acceptance from their families because they could take the post and show their families how the world has responded,” he says.

Foremostly, the initiative aims to serve as a source of inspiration for the younger generation – that no matter what, your love is valid.

“Given the spread of education and the fact that people, before COVID-19, had been moving across the country for work, interactions between people of different communities and faith is going to grow much more. Once that happens, we would like these stories to serve as an inspiration for young people for them to know that it is all right to fall in love and marry someone from another faith, another background, religion, caste etc,” Samar says.