Female pleasure and storytelling: Seema Anand is breaking sex myths, one reel at a time 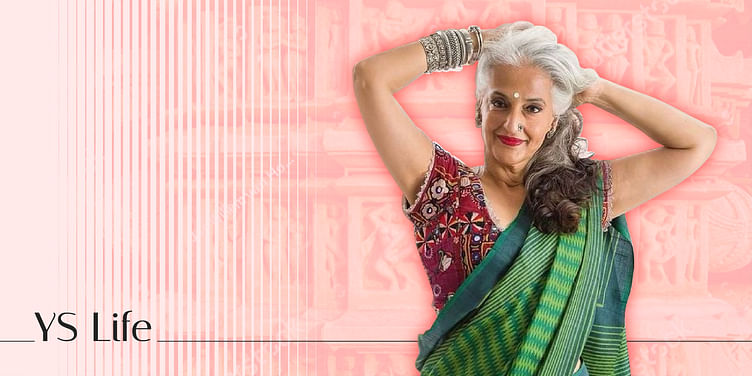 India is the land of Kama Sutra, an ancient book on sexuality, eroticism, and emotional fulfilment. Yet, Indians shy away from talking about sex.

Sex, at the most, is a topic of laughter in an all-men’s WhatsApp group, or a hush-hush subject discussed behind closed doors by the women of the house. This taboo is mostly associated with the fact that sex is perceived as the mere act of penetration, and Kama Sutra, a book on the different sexual positions.

Seema Anand, an author, mythologist, storyteller, sexual health educator and more recently, a digital content creator, is on a mission to break these myths.

While researching about the Kama Sutra, Seema discovered that in ancient times, women were taught to execute positions based on how different pieces of jewellery moved on their body.

“When a woman was going to be on top, the idea was that she only had to move her hips. For this, women would wear a girdle-like belt with lots of ghungroos on their upper waist. They had to make sure that the ghungroos didn’t make a sound…So we didn’t say that she climbed up on top, we would say that she put on her ‘jingling girdle’,” explains Seema. Likewise, every position had its own jewellery and this caught her interest.

She adds, “I was drowning in the beauty of the idea and that was the moment when I thought that it was not okay to just talk about. It had to be written for people to read over the years.”

In 2017, Seema authored The Arts of Seduction: The 21st Century Guide To Having The Greatest Sex Of Your Life.

In an attempt to reach out to a larger and younger audience, Seema took to Instagram and started experimenting with short-form digital content.

“I want to be able to create more awareness and need people to understand that it is okay to talk about sex,” Seema tells YS Life.

Seema is a much older person in a younger people’s world. But the very agenda of being a part of the digital content creators’ world has been to be facilitate inter-generational conversations around sex.

“It has been all about understanding how to change the language around sex and provide everyone with enough vocabulary that they can use to discuss it,” she says.

YS Life asked Seema to define herself. To that, the author said: “I think I have ceased to be a person. I am an entity now and people associate me with the subject that I speak about.”

Seema has always been talking about women’s narratives. She calls herself a storyteller and strongly believes that the story one tells defines them and helps create their identity.

While researching stories from different cultures, she realised how India’s mythological stories and folktales never spoke about a woman’s right to her own body, sexuality or pleasure. “It always belonged to some man— either her father or husband’s decision– it was always a property,” she explains.

And that became the turning point for Seema. She was frustrated with stories that have silenced women. “My problem with silencing stories is that we (women) don’t really have role models to follow,” she adds.

Thus, Seema shifted her focus to look back and bring forth stories that provide role models for women as they move forward.

“My entire work has been about making sure that we can talk about sex. Even if you disagree with me, we can have a conversation and that’s it– once you start talking about something, you can normalise it,” Seema says.

Seema’s Instagram handle @seemaanandstorytelling boasts 764k followers today, and her YouTube channel has another 278k subscribers, and counting. But it is not every day that we see a 61-year-old, mom-like figure being a sensation in the digital content space.

“There is a lot of criticism and trolling. I have lost my best friends who thought they couldn’t be friends with me anymore because I was talking about this subject. That was not an easy place to start with,” Seema says.

Seema is married to an otherwise supportive husband, but he is also not thrilled about her work. Her greatest assets have been her daughter and daughter-in-law. “Every time my voice has gone down a little bit, they have provided me with another mic,” she says.

While dealing with personal issues has been challenging, the public eye comes with more hiccups.

Firstly, Seema explains, understanding the workings of the digital media was no cakewalk. “I do not understand the language that the younger people are speaking in. I do not know the terminologies that they use, the things that they would like to hear, and in how much time. Here, I am trying to break a barrier and change an idea, and I want to be able to explain it to an audience with an attention span of 30 seconds. That is really tough,” Seema adds.

Secondly, grey hair and wrinkles come with the challenge of acceptance. “The world is happy to listen to a young and beautiful girl…an older woman talking about things is only worthy of contempt and abuse.”

Having said that, what Seema brings to table and other ‘young’ influencers or creators don’t, is experience. Having lived through the bra-burning era and being backed by academia, Seema is able to offer a different perspective.

She says, “Yes, I do not fit in with people’s idea of, and even lack the comfort factor when it comes to content creators. But I think there is a certain wisdom that comes with age.”

Addressing the younger generation, who continue to stigmatise the fact that older people can indulge in sexual activities and experience pleasure, Seema says, “People are having sex all the time. Nobody is asking you to delve into it. But for God’s sake, stop judging. Do the same thing for others as you want it done for yourself. It works both ways.”

Seema busts a few myths and shares tips to experience the greatest pleasure:

(Seema Anand is a speaker at the TEDx GatewaySalon Breaking Barriers 2022 Event.)