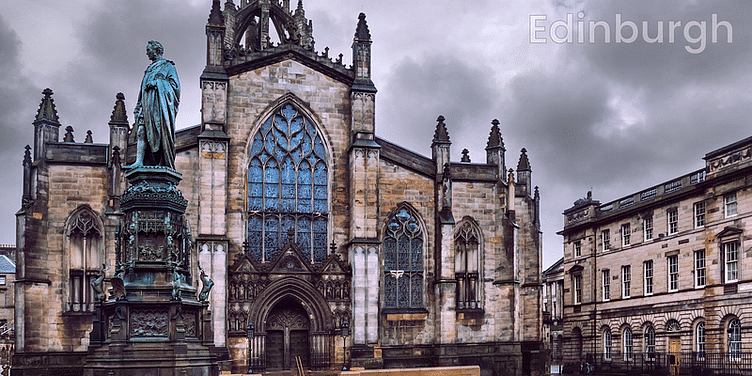 Steeped in history, culture, architecture, traditions, and natural beauty, Edinburgh exemplifies the co-existence of the past with the present.

An hour into my first visit to Edinburgh, the capital of Scotland, I was in love. Tumultuously, passionately, unable-to-think-ably in love.

This was new to me.

Army brats are used to being on the move, bidding adieu to cities and stepping into new ones with nary a thought. This love for a city…it wasn’t for me.

But Edinburgh was having none of that.

She grabbed me by the scruff of my neck, demanding my attention and winning my affection–in a matter of minutes. And that was that! There was no going back. Except, of course, to Dùn Èideann (Scottish Gaelic), the capital of Scotland since the 15th century.

Located on the southern shore of the Firth of Forth, Edinburgh is–in my extremely biased opinion–one of the world’s most beautiful cities.

Steeped in history, culture, architecture, traditions, and natural beauty, this is where the past comfortably co-exists with the present–the medieval Old Town and the Georgian New Town that sit side by side are proof enough.

Renowned as the birthplace of the Scottish Enlightenment, the “Athens of the North” has a storied past and is now celebrated as a city that melds heritage, culture, innovation, and change.

According to Visit Scotland, Edinburgh and Lothians was the most popular Scottish region to visit for domestic and international travellers in 2019.

But Edinburgh isn’t your routine tourist hotspot. It’s a shifting montage, one that presents a different sight depending on your choices, likes, and interests. There isn’t any one Edinburgh; it’s a mosaic of different aspects that fit together like the pieces of a puzzle. Choose the side that most appeals to you!

For the heritage lover

Start at the beginning with Edinburgh’s number one attraction. Located at the top of the Royal Mile on top of Castle Rock, Edinburgh Castle stands tall (on an extinct volcano) as the city’s guardian angel. Don’t miss seeing Scotland's Crown Jewels, including the famed Stone of Destiny. Walk down the historic Royal Mile where every other building looks straight out of a fairy tale, explore the iconic old town, explore the Palace of Holyroodhouse, the late Queen's official residence in Scotland, the chambers of Mary, Queen of Scots, the Scottish Parliament, and the Royal Yacht Britannia, the Queen’s floating palace for over 40 years.

Other structures that are sheer poetry in stone and must be seen: St Giles’ Cathedral, which dates to 1485, St Mary’s Episcopal Cathedral, Nelson Monument, and the National Monument of Scotland. Ánd, you can’t not meet Greyfriars Bobby, the beloved dog who guarded his master’s grave in Greyfriars Kirkyard for 14 years.

For the museum lover

Edinburgh’s many museums and galleries bring together information and inspiration in the finest manner possible. The National Museum of Scotland–located in a visually stunning building–showcases a diverse range of art and design exhibits, with numerous interactive displays (Don’t miss Dolly the Sheep!).

Art lovers are sure to want days to linger in the three National Galleries of Scotland in Edinburgh: the National Gallery on the Mound, the Portrait Gallery on Queen Street, and the Gallery of Modern Art on Belford Road. Awaken the child in you at the Museum of Childhood, which has a massive exhibition of retro toys and games.

Check out the Queen’s Gallery, in the Palace of Holyroodhouse, to view changing exhibitions from the Royal Collection. Drop by the People’s Story Museum to explore the lives of the working classes throughout Scottish history, and make a stop at Camera Obscura, a museum packed with optical illusions and interactive exhibits. Come evening, head for the Scotch Whisky Experience, where you can become part of the whisky-making process and savour regional whiskies.

For the book lover

Edinburgh is proud of its literary heritage, and celebrates its most famous writers with a museum. Accessed via the Makar’s Court–with famous quotes inscribed in the flagstones–the Writers’ Museum celebrates the lives of Robert Burns, Sir Walter Scott, and Robert Louis Stevenson. This is where you can see Burns’ writing desk, the printing press on which Scott’s Waverley Novels were first produced, and Robert Louis Stevenson’s riding boots. Follow it up with a visit to the Scott Monument, the largest monument to a writer in the world. Built in the 19th century, the landmark stands out in the city’s skyline. It’s possible to climb the 287 steps to the top and enjoy wonderful views of Edinburgh and the countryside.

When in Edinburgh, there’s no way you can avoid JK Rowling and Harry Potter. Numerous walking trails are available, but you can do your own: Edinburgh Castle, George Heriot’s School, Greyfriars Kirkyard, Riddell tombstone, McGonagall headstone, Potterrow Port, The Elephant House, Balmoral Hotel, and Victoria Street (Diagon Alley!)

Writing and Edinburgh have gone hand in hand down the ages. The literary wealth includes Arthur Conan Doyle, the brain behind Sherlock Holmes; JM Barrie, who created Peter Pan and the magical Neverland; Alexander McCall Smith, the creator of The No. 1 Ladies' Detective Agency series, and Ian Rankin, the crime fiction writer known for his Inspector Rebus novels.

For the festival lover

The city’s festival sked is jam-packed through the year. What should you plan for? The Scottish International Storytelling Festival (October 14–30 2022) celebrates the proud tradition of oral storytelling. Christmas celebrations are a chance to see the Old and New Towns in sparkling glory, but you must stay on for Hogmanay, the four-day New Year celebration, to enjoy the street party, concerts, and fireworks.

For the market lover

If the shops on Princes Street don’t take your fancy, the many markets of Edinburgh are sure to. The Edinburgh Farmers' Market is open through the year (9am-2pm, Saturdays) alongside the castle ramparts in Castle Terrace. Fruits, vegetables, jams, chutneys, cheese, beer, and meals…you’re sorted! On Sundays, head to Stockbridge Market (10am-4pm), which offers fresh produce and eats with handmade products and crafts. On the Royal Mile, the Grassmarket is buzzing on Saturdays (10am-5pm) with people sampling seasonal produce, breads, baked goodies, and more.

The Leith Market, on the first Saturday of the month (10am-4pm), also hosts a vegan quarter. In August, visit the West End Fair, which showcases local designers, makers, and artists. Last but not the least is the European-themed Christmas Market that’s rich in delicious aromas and seasonal baubles.

For the nightlife lover

The shops may shut down by 7 pm max, but Edinburgh’s nightlife sparkles all the way into the wee hours. Theatre enthusiasts can choose from a play, musical, or performance at one of the many theatres, including The King’s, The Festival Theatre, The Royal Lyceum Theatre, Traverse, and Edinburgh Playhouse. If you’re more in tune with music and dance, check out the gigs and concerts at The Usher Hall or The Queen’s Hall. Try the Shanghai Club or Edinburgh Folk Club to get your feet tapping.

Movie lovers head to Vue Cinema, Edinburgh Filmhouse, or Dominion Theatre for their film fix. If nothing appeals, why not go for a laugh or two at The Stand or Monkey Barrel Comedy? Like horror movies? Sign up for a ghost tour to learn more about the gory and ghostly past of Edinburgh. Follow it all up with a wee drink and the ubiquitous chips (doused in malt vinegar, of course) at one of the many pubs dotting every other street.

For the day tripper

A couple of extra days could mean exploring nearby attractions. There are so very many that you are sure to be spoilt for choice. Reach Lauriston Castle to take a step back in time. The 16th century tower house invites you to explore the house as it was left by its last owners, in 1926. Walk the beautiful woodlands and the award-winning Japanese garden. Located on the outskirts, Craigmillar Castle dates from the 14th century and is a warren of little structures, all created by successive residents.

Take the time out to visit Rosslyn Chapel, located in a serene village by the same name 6km away. Constructed under William Sinclair, the first Earl of Caithness, in 1446, the chapel has long been associated with the Knights Templar and the Grail legend and skyrocketed to fame after The Da Vinci Code. A bit more time on your hand? Head to Glencoe, Loch Ness (look for Nessie!), or Loch Lomond & The Trossachs National Park.

Other things that you must do when in Edinburgh–explore the extremely charming Dean Village and its many cobbled streets and quaint houses, and sign up for a nearby distillery tour. Nothing better than sampling Scottish whisky at its source, is there? Slàinte mhath!

(The story has been updated to fix a typo.)

How COVID has transformed CME and the way doctors keep learning