Why glasshouse-inspired restaurants are the new escape in big cities 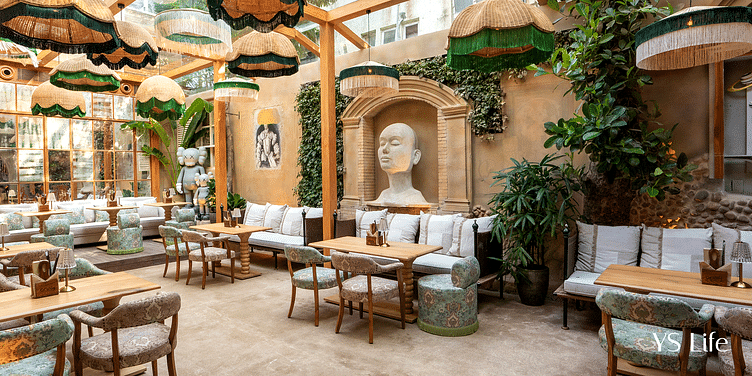 In a post-COVID-19 world, as people start returning to the outdoors, these foliage-drenched eateries are making for a respite in crowded, concrete jungles.

If you love sunshine and greenery, go ahead and soak in it, or perhaps take a bite in it. For, a trend that’s increasingly becoming popular in the world of gastronomy is glasshouse-inspired eateries that bring the outdoors in, quite literally! In the post-COVID-19 world, as people are returning to the outdoors, these gorgeous restaurants—centred around nature with plant-filled green interiors, often with a tree or two growing within, and tonnes of natural light—are adding a healing touch to a leisurely experience like dining out.

The trend is huge in the West. Take the case of Äng, a coveted Michelin-starred restaurant in Ästad Vingård, Sweden, which saw a new multi-level glasshouse home set in the midst of a vineyard this July. Or the Azalea, a swanky new glasshouse restaurant that opened in Scotland.

Back home too, a slew of glasshouse-inspired eateries has come up on the scene. Tsuki, inspired by the rainforests of Bali, set up in Pune’s busy Koregaon Park, is churning up excitement with diners. In Mumbai, too, several of these new restaurants are changing the culinaryscape.

Why are these spaces such a lure? Call it the antidote to maximalism or just a return to the elements, it’s a soothing experience as you settle in to a meal here.

Giving people a getaway in a bustling, crowded city like Mumbai

Imagine sitting by an old, leafy tree on a bright, sunny day. Sounds like a picnic? Well, this time skip the sandwiches and fruit and tuck in into an elaborate four-course meal right there. At Banyan Tree Café at Ballard Estate, one can do just that.

The 10,000 square feet-space, which also houses the café, has an ancient banyan tree at its heart. Sit down at a table to find the tree’s long aerial roots almost touchdown to you. Within minutes, you’ve left the vagaries of city life far behind.

Shahrom Oshtori, Managing Partner at the café, which is housed in a re-fashioned and conserved ice factory, says the aim is to have a space that melds nature into people’s lives. “Banyan Tree Cafe is designed to provide fluidity of space. We’ve used glass to open up the space and the ancient banyan tree inside has been restored. It’s meant to make for a serene oasis where the airy ambience and a complimenting menu bring about a holistic balance.”

The Conservatory at Juhu is another such haven. This sun-kissed two-level lounge by restaurateur Suren Joshi reminds you of being in an actual glasshouse with swathes of lush greenery all around you creating a soothing effect. There are over 35 species of vegetation here from tiny flowering plants like raat rani and mogra to mango and mulberry trees and several large plants, sourced from Kamshet, near Pune.

Suren says he has always loved glasshouses and the tranquil aura they have and wanted to give that to patrons.

“We’ve seen al fresco spaces before, but the glasshouse trend is about greenery taking complete centre stage. Diners say they feel this peace when they eat here and that it’s like getting out of Mumbai without actually leaving,” he adds.

Virat Kohli’s restaurant One8 Commune may attract fame for having the cricketer’s favourites among other fare, but it’s the green, glasshouse vibe that puts the ‘X factor’ in its commune dining concept.

With Mumbai being the concrete jungle that it is, any tryst with nature makes for a welcome respite and aesthetics here are ticking off all the right boxes for diners. Informs Vartik Tihara, Partner and Co-founder, “I think what people loved the most about One8 Commune’s decor is how the restaurant literally glows during the daytime, thanks to the glass doors and ceilings that draw in light with hints of greenery. The nature-inspired ambience creates a certain aura and emits an energy, which definitely boosts the mood.”

The greenhouse concept redefined design and interiors in a hip, contemporary way. Karan Nohria, who founded Silly in Khar, Mumbai, affirms how he had specific things in mind for his 4,700-sqft hangout. It has greenery and gravel pathways, and exposed brick walls that add to the charm with cosy alcoves and a jute swing set.

Calling it a win-win, the 23-year-old restaurateur, says, “It all goes towards making the customers feel relaxed and at home. Plants will always be a part of our creative arsenal because they not only have an immediate visual impact but also improve air quality. And other elements that go with it perfectly fall in line with conscious eating, a key trend today.”

Architect Paushika Gupta, who has designed a number of restaurants, shares why glasshouse-inspired eateries and restaurants are becoming so popular. She explains that glass is a medium that creates a transparent barrier between oneself and the outside world, it could be within a confined space or looking towards the outer environment and creates multiple layers.

“When it comes to glasshouse-inspired eateries, the natural vibe definitely gives a feeling of relaxation since it creates an atmosphere of comfort with regard to the climate. Foliage in and around, in any and every context, is welcomed as today, one sees less and less greenery around. The foliage—artificial or natural—helps restore the faith and calmness of a natural environment.”

Will take some effort to maintain, say interiors experts

Parzan Daruwalla and Natasha Chawla, Principal Architects of Studio 6158 who designed The Conservatory, say the trend is growing. States Natasha, “Look, we always had plants as an element in design, but this is unfolding in a whole new, big way. Someone in Goa saw the restaurant in Mumbai and asked for the same kind of design, too.”

She adds how nature-themed restaurants are about sparking a connection in people as well. While not many people would go out of their way to touch plants growing by the roadside, here, it allows them to get close to the greenery in a hygienic atmosphere, she explains.

Beautiful, yes, but glasshouse-themed interiors also require effort to maintain. Parzan shares words of caution as he narrates their own experience. “Firstly, there has to be someone to tend to soil and spillage in the rains. Another issue we saw was that the place takes in a lot of sunlight owing to the glass roof, so the plants tend to burn. Hence, they needed to be sprayed with water every day so they stay hydrated. In fact, in week one when we started out, so many of them died. But once the plant gets used to it, it slowly adapts to the surroundings and begins to flourish. Remember, it’s like a living human being that needs just as much attention; it’s not just a piece of décor.”