An Evening with The Supersonics

You know that band that everyone’s talking about? The one from Kolkata that’s doing something different, something original? Yeah, yeah, they’re the ones who refuse to play ‘Summer of ‘69’and yet their shows are sold out.

Umm...did I mention the gorgeous groupies? YourStory gate crashed a practice session, cornered them with a recorder and made them talk! Find out what really makes The Supersonics tick!

Now it’s quite possible that many of you may have already heard of The Supersonics. In fact, you might even be a fan. And then there are those who’re slowly becoming fixated with everything to do with The Supersonics. Now it’s quite alright to pick up the autographed t-shirt, the limited edition keychain, cap and zippo lighter, it’s quite something else to roam around wearing the Supersonics face mask.

But then there are those who’re taking fandom to an entirely different level – think a 21st century bylane connecting A Hard Day’s Night and Gimme Shelter. What is that supposed to mean? Picture a Supersonics buff curling up in bed, smiling stupidly because his head rests on some band memorabilia – namely the lead guitarist’s missing shoe. Elsewhere, another crazed fan is being rushed into the ICU after attempting to place a listening device on the band’s homicidal Doberman. According to recent reports, a few individuals have even tried stealing their trash in order to retrieve cigarette buds. Why? Well, look no further than the Top Ten Hottest items on eBay.

Okay, okay, so you’re not buying any of this but you should know that it won’t be long before the band will have to make its own mockumentary on fandom. I suggest something like this.

So what makes The Supersonics the hottest ticket in town? Well, we’re not telling you because you’ve got to go to a gig to find out! Promotional gimmicks aside, we really do think that they’re worth the fuss. The Supersonics are structured in a quartet arrangement of lead guitar, rhythm guitar, bass and drums. Their music is a heady mix of retro and contemporary that weaves it way around the head bobbing, sing along lyrics. Think The Ramones meet Coldplay.

The band is fronted by Ananda Sen, who was probably peeled off a United Colours of Benetton billboard and handed a microphone. Every once in a while, a little Alex Kapranos (Franz Ferdinand) creeps into his vocal chords giving their sound a distinctive and refreshingly eclectic tinge. As a performer, Sen is a spectacular blur of pure energy that keeps the fans buzzing till the very end of every gig. In my opinion, he’d probably own the Duracell bunny if they ever went head to head.

Up next, on lead guitar, is the uber cool skinhead who sucks the listener into a time warp with his blend of classic and contemporary riffs. Although he was schooled in the tradition of the blues, having played for the Saturday Night Blues Band, Rohan Ganguly goes further with his musical explorations into the sounds of indie and punk rock. While he leaves the bulk of the singing responsibilities with Sen, it must be said that he’s a more than decent bathroom singer on backing vocals. He misses his shoe and would like it back sometime soon.

Alongside the other two is this inconspicuous man who goes about building the framework holding the vocal and melodic schemes together with a Zen-like focus. While you won’t find bassist Mani Mani rummaging through the size zero jeans rack (unlike Ganguly and Sen), you’d be a fool to doubt his ability with the bass guitar. At every gig, Mani is most likely culpable for all the extreme cases of foot-tappyosis or neck-hurticitis. Off the stage, Mani has another, equally important job in the capacity of Official Band Jester. A word of advice for all you gullible groupies – beware of Mani’s free Malayalam lessons!

At every gig there is this one guy who rarely gets off his ass but you can tell he’s totally into the music. You probably know him as Chotu, The Supersonic’s drummer but his visiting card claims he’s ‘Chordia Chordia’. Quiet, shy or reserved are perhaps words that best describe Chordia’s off stage personality but you’d never guess it was the same guy in full flow on the drums. Most impressively, he passed the YourStory Drummer Test having steering clear of any statement containing the phrase ‘drumming is a metaphor for life’ and actually gave us an insight into the economic factors that govern record labels in India.

Now you should know that the average Calcuttan is familiar with the various Bangla rock outfits and English cover bands that have flourished over the years in the city. Unfortunately, if you’re not from Calcutta, chances are you wouldn’t have even heard of these English bands. This is because only a handful of bands have ever performed in other parts of the country. Calcutta still remains a large unexplored region on the rock map of India for rock aficionados and this raises its own set of questions. Is Calcutta wilfully hoarding its talented musicians? Or does the truth lie deeper?

But there is one Calcutta band that is doing things differently. In October, 2008, The Supersonics took yet another historic step by making a foray into the Mumbai music scene. Back to back gigs, first at The Hard Rock Cafe and then The Blue Frog sent Mumbaikars into delirium, earning the band high praise, not to mention the endless list of rave reviews that trotted faithfully after.

Join me in this exclusive YourStory interview with The Supersonics as we uncover their roots, explore the phenomenon of Kolkata rock and justify the need for originality in the music sphere. We also look at the financial side of running a band and try to answer the all-important question of sustainability. Plus, the band passes its verdict on ‘Death Melodic Active Jazz Metal’, fashion in rock and the top secret CTF project! 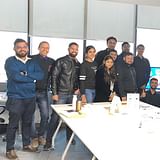